Brad Plummer calls our attention to a study by an economist at the University of Oslo showing that employment in North Carolina plummeted immediately following the election of Republican Governor Pat McCrory. According to the study, whose lead author is University of Oslo Professor Marcus Hagedorn, employment fell by 295,000 or 7.0 percent in the three months from November, 2012 to February, 2013. This plunge in employment was associated with a 5.3 percentage point drop in the employment to population ratio and a 6.3 percentage point decline in the labor force participation rate.

The plunge in North Carolina's employment is especially striking since it came at time when the national economy was adding jobs at a respectable rate keeping the employment to population ratio nearly constant. Clearly businesses in North Carolina responded negatively to their new governor.

Actually, these data are directly taken from the Hagedorn paper (Table 1), but this is not a point that he makes in the paper. Instead, the paper claims that there was a sharp uptick in employment in the period since severe cuts in unemployment insurance benefit duration and eligibility were put in place in July of last year. While the data, which the authors have constructed from their analysis of the Current Population Survey, does show a sharp turnaround (which actually begins in February), it also shows this striking falloff in employment following the election. 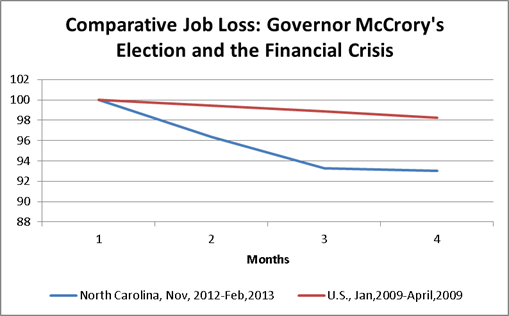 In reality, this sharp falloff in employment almost certainly did not happen. This is horrific depression type stuff. Unless North Carolina was hit by some devastating epidemic, war, or climate disaster (the data are seasonally adjusted), employment could not have fallen as indicated in the data shown in the paper. Conversely, this also means that employment almost certainly did not rise as shown in the data. In other words, the data series in the paper is being moved by errors in measurement, not anything real in the economy.

The paper's author obviously wants to argue that cutting unemployment benefits is a good thing for job creation and economic growth. His data are far too flimsy to make the case, which more reliable data clearly do not support. But if we want to treat the Hagedorn data as being authoritative then we can say that McCrory's election was the worst thing to hit North Carolina since General Sherman's army.