It might have been worth making this point in an article on President Obama's budget proposal that tells readers of his plan to cut Social Security by reducing the annual cost of living adjustment. It would have been worth putting this proposal in some context, since many readers may not understand its consequences.

President Obama's proposal would reduce benefits by 0.3 percent for each year after a worker retires. After ten years benefits would be cut by 3.0 percent, after twenty years 6.0 percent, and after 30 years 9.0 percent. Over a twenty year retirement, the average cut would be 3.0 percent.

This cut would be a bigger hit to the typical retiree's income than President Obama's tax increases at the end of 2012 were to the typical person affected. A couple earning $500,000 a year would pay an additional 4.6 percentage points on income above $450,000. This would amount to $2,300 a year (4.6 percent of $50,000). That is less than 0.5 percent of their pre-tax income and around a 0.6 percent reduction in their after-tax income. 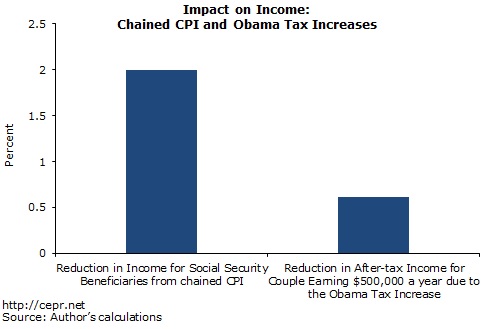