By now everyone has heard about Detroit's bankruptcy. One of the big bills in the city's payable box is the $3.5 billion in unfunded pension obligations. The story in many people's minds is that overly generous public sector wage and benefit packages pushed the city over the brink.

It's worth looking at this one a bit more closely. According to the city, the average retiree gets a pension of $18,275. That's better than many workers, but $1,500 a month in pension benefits will not put anyone on the Riviera. That's coupled with pay that averages less than $42,000 for active city workers. (They accepted a 10 percent pay cut last year.)

It's often difficult to get a sense of the meaning of numbers without a base of comparison. In order to know whether Detroit pensions are a lot or a little we can compare them to the pay at an organization that gets substantial support from the government, Goldman Sachs.

If people didn't realize that their tax dollars were going to boost the profits and pay at Goldman that's probably because it is not an explicit line in the budget. The way the government supports Goldman in its various activities (it was in the news yesterday for jacking up aluminum prices through market manipulations) is by providing it implicit insurance.

This insurance takes the form of the famous "too big to fail" guarantee. There is a widely held belief among investors that if Goldman's deals threatened to put the bank into bankruptcy, as happened in 2008, the government would step in to bail them out, as it did in 2008. As a result, investors are willing to lend banks like Goldman Sachs money at below market interest rates.

Bloomberg News estimated the size of this subsidy to the banks at $83 billion a year. This money translates into higher profits for banks like Goldman Sachs and higher pay for its top executives.

This sets up an interesting comparison, the subsidized pay of top executives at Goldman Sachs with the pensions of Detroit public employees. The graph shows the hourly wage of Goldman Sachs CEO, Lloyd Blankfein, based on his reported 2012 compensation of $13.3 million. (It was $16.2 million in 2011.) Assuming a 40 hour workweek (I know that Mr. Blankfein must work more than this), his compensation comes to $6,650 an hour. This means that in three hours he will earn more than a typical Detroit retiree gets in a year. 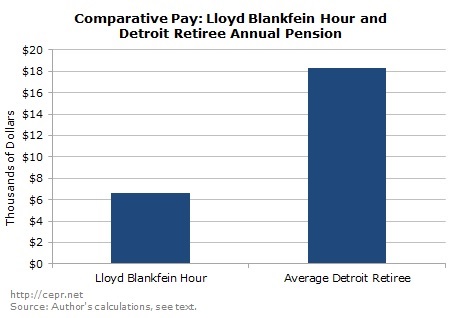 We can also make the comparison of Detroit pensions to Goldman Sachs more generally. Goldman Sachs profits in the last quarter were $1.93 billion. This means that if the bank sustains this rate of profitability its profits over two quarters would exceed the $3.5 billion unfunded liability of the Detroit pension system. It seems that there is much more money in being a government subsidized too big to fail bank than in being a declining industrial city.