Federal Reserve interest rate policy is aimed at targeting inflation and unemployment. The impact of interest rates on consumer borrowing and spending is an important channel for this policy since the rates financial institutions charge consumers for loans depend on the Federal Reserve’s interest policy. If the Fed decides to raise interest rates, the cost of borrowing by households would also increase. This post shows trends in consumer debt from 1990 until now.

Over the past 25 years the dollar value of outstanding consumer credit increased dramatically, but the overall share of income consumer credit  has decreased. The current interest rate climate allows for a low debt service level. 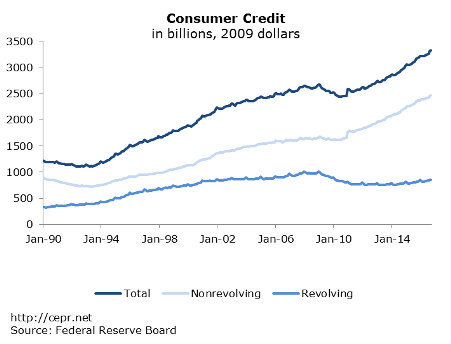 This figure illustrates the rise in consumer credit, adjusted for inflation. It can be seen that revolving credit, which is mostly credit card debt, has only modestly increased since 1990. Nonrevolving credit, mostly composed of student and auto loans, jumped up from 885 billion to almost 2.5 trillion.

However, once we look at consumer credit as a share of income, we actually notice a decrease. 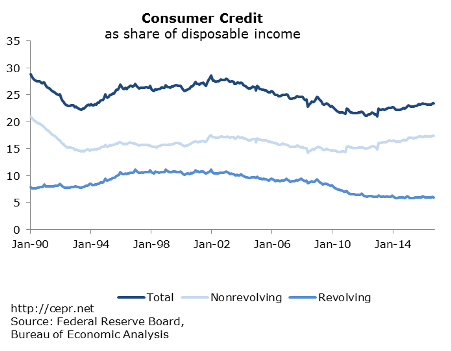 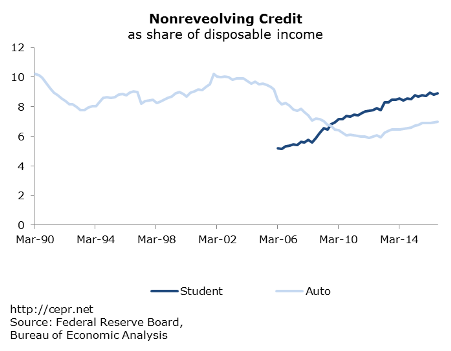 While auto loans decreased from 10 to 7 percent of income since 1990, student loans have seen a sharp rise. The data on student loans starts in 2005, and have since jumped from roughly 5 percent of income to 9 percent. Student debt is rapidly growing in its aggregate importance, but it already presents a substantial burden to many of the households who hold it. 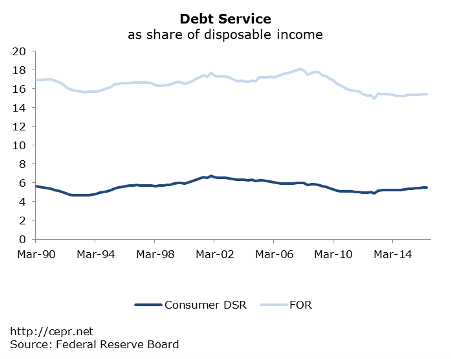 In terms of debt service as a share of income, the figure above illustrates how it has remained fairly constant since 1990. The debt service ratio for consumer credit peaked at almost 7 percent of real disposable income in the early 2000s, and then declined to about 5.5 percent in 2016. The financial obligation ratio  — which is a broader measure of financial obligations including rent payments, homeowner’s insurance and property taxes — is actually lower now, at 15 percent, than it was in 1990, when it was 17 percent.

While debt does not seem to a major issue in the aggregate, there are undoubtedly many households that are seeing major burdens from their student loans and other forms of debt. Returning to a high interest rate climate would only amplify that burden.