What the Late 90s Should Have Taught Us: Inflation Does Not Necessarily Accelerate When Unemployment Is Low

The Federal Reserve announced after their December meeting that “in view of realized and expected labor market conditions and inflation” it will raise interest rates to ¾ of a percentage point, anticipating further hikes throughout 2017.

The statement released by the Fed cited solid job gains and the decline in unemployment amongst their reasoning behind the interest hike. However, as this analysis of the last employment report from CEPR points out, the decline in unemployment was partly due to people leaving the labor force, rather than finding jobs. Furthermore, the employment-to-population ratio for prime-age workers is 2 percentage points lower than before the recession, and 4 percentage points lower than its peak in 2000.

The current labor market, while substantially recovered from the Great Recession, is still significantly weaker than in 2000 and even 2007. We can recall the pressure on the Fed to raise interest rates in 1996, based on fears of inflation. However, Alan Greenspan, then chair of the Fed, did not succumb to that pressure and held rates steady. The result was that between 1996 and 2000, over 11.6 million jobs were added without causing inflation to shoot up.

There is little evidence of any acceleration in the inflation rate regardless of which index is used. 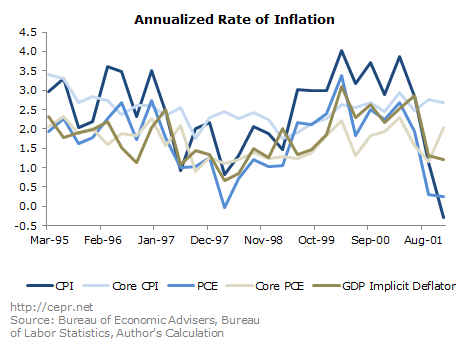 The figure above illustrates the annualized growth rate of the Consumer Price Index (CPI), Personal Consumption Expenditure deflator (PCE), and GDP Implicit Deflator, along with the core rates for CPI and PCE (which exclude the energy and food prices).

The PCE and CPI grew slightly faster in 1996 than in 1995. However, their growth decelerated significantly in 1997 and 1998, falling to as low as 0.7 percent for PCE and 1.4 percent for CPI in 1998. The only uptick in non-core measures of inflation was in 2000 and was a direct result of raising energy prices, with the CPI for energy costs posting an increase of almost 17 percent in one year.

All indices paint the same picture: despite the tight labor market in the late 90s, inflation was actually lower that in the first half of that decade. Low unemployment did not cause any acceleration in inflation, and the economy, as well as workers, enjoyed a period of strong growth.

The Fed’s decision to hike interest rates now is a deliberate policy choice against allowing the economy to reach full employment. There is sufficient slack in the labor market to further allow the economy to grow and as we should have learned from the late 90s, inflation is not an imminent threat.