Some press reports have noted Venezuela’s economic growth lately, in looking at Chávez’s track record in the run-up to Sunday’s presidential election.  For example, the Associated Press wrote that “the economies of Brazil, Chile, Peru and Argentina all have expanded more rapidly than Venezuela’s since Chávez took office in 1999, recording average growth between 3 and 5 percent a year.”

It is important to have a reasonable base of comparison. It is not reasonable, for example, to include the years 1999-2003 in looking at the Chávez government’s growth record.  During these years, the government did not have control over the national oil industry; even worse, it was controlled by people who, according to the prominent Venezuelan opposition journalist Teodoro Petkoff, had a strategy of “military takeover.”  Not only the military coup of 2002, but the management-led oil strike of 2002-2003 was devastating to the economy, inflicting a loss of about 29 percent of GDP.

For an analogy, imagine that in the U.S. the Federal Reserve were controlled by people who were trying to destroy the economy so as to topple the government. Clearly it would not be reasonable to hold the executive branch responsible for the resulting state of the economy.

However, for economists it would also not be fair to measure growth in Venezuela from 2003, since that would be measuring from the bottom of a deep recession.

A reasonable comparison would be to use 2004, since by that year the economy had recovered to its pre-recession GDP.  By that measure, as seen in the table below, Venezuela has had decent growth.  If compared to the countries cited by AP, Venezuela’s growth is significantly better than Brazil and slightly higher than Chile.  Argentina and Peru are the outliers during this period, the fastest growing economies in the region.  Mexico is the outlier at the low end, the worst performing economy in the region.

Of course the better measure would be per capita GDP growth, and Venezuela would do somewhat worse there by comparison because it has higher population growth than some of its neighbors. But the press doesn’t use that figure, and the point of this exercise is just to show that if we are going to evaluate economic performance under Chávez, it’s really not fair to include the 1999-2003 years.

For Venezuelans, another relevant comparison might be to the pre-
Chávez years.  From 1980-1998, Venezuela was the worst-performing economy in South America, in a period during which the region suffered its worst long-term growth failure in a century.  Per capita income actually fell by 14 percent, and inflation was much higher (33 percent annually) than during the Chávez years (22 percent average). 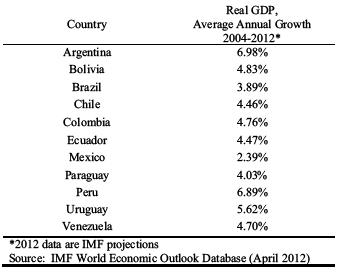