General Strike in Brazil Responds to Wave of Street Protests

I have lived in Brazil for 18 years.  Yesterday I decided that an opportunity to protest for a 40-hour workweek was too important to pass up, and headed to Rio de Janeiro’s Candelaria square to march with the unions.

The march was part of a general strike held across Brazil yesterday. Across the country banks, ports, factories and construction projects shut down.  Protesters closed off 50 highways in 18 states.  In Brasilia, the Landless Peasant’s Movement (MST) occupied the Incra (agrarian reform) Federal Ministry.  The strike was coordinated by a group of 70 union federations, such as the Central Única dos Trabalhadores (CUT; the Unified Workers' Central, in English) and Força Sindical, the national student union (UNE) and social movements like the MST. 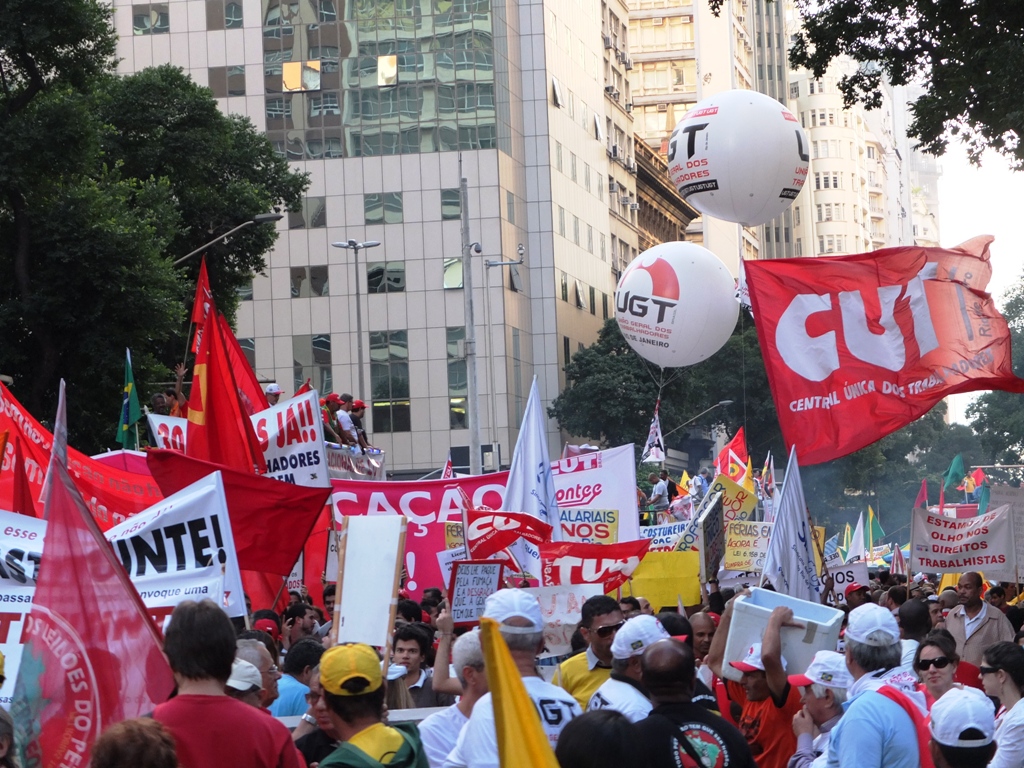 It was seen by many as a response to the wave of street protests that started over the right to free public transportation in June that were then quickly dispersed into clusters of smaller protests over a wide variety of issues ranging from corruption related to mega-sporting events like the World Cup, to red herrings such as blocking the entrance of foreign doctors into the country that seem to have been disseminated through social media sites such as Anonymous Brazil by ultra-conservatives.  Shortly after the initial protests began, masked men wrapped in Brazilian flags and wearing Guy Fawkes masks began to attack anyone who flew a union flag or held up a union sign. At the same time, calls were made through Facebook and Twitter by Anonymous Brazil and others for a “general strike” on July 1, without participation of unions. Needless to say, it was a complete flop. As blogger Bepe Damasco said, “Calling a strike without unions is idiotic.”

The strike coalition created a list of demands including reducing the workweek from 44 to 40 hours, dedication of 10 percent of GDP for public education, and “quality public transportation.” The social movement that initially started the protests in June, the Movimento Passe Livre, complained about the watering down of their message but agreed to participate in the protests anyway in an act of solidarity.

There were flags and signs everywhere, from the major unions and from most of the left political parties, some of which, such as the Partido dos Trabalhadores (PT; the Workers’ Party in English)  and the Partido Democrático Trabalhista (PDT; the Democratic Labor Party) support president Dilma and some of which -- such as PSTU (the Unified Socialist Workers' Party) and PSOL (the Socialism and Freedom Party) -- oppose the PT from the left. 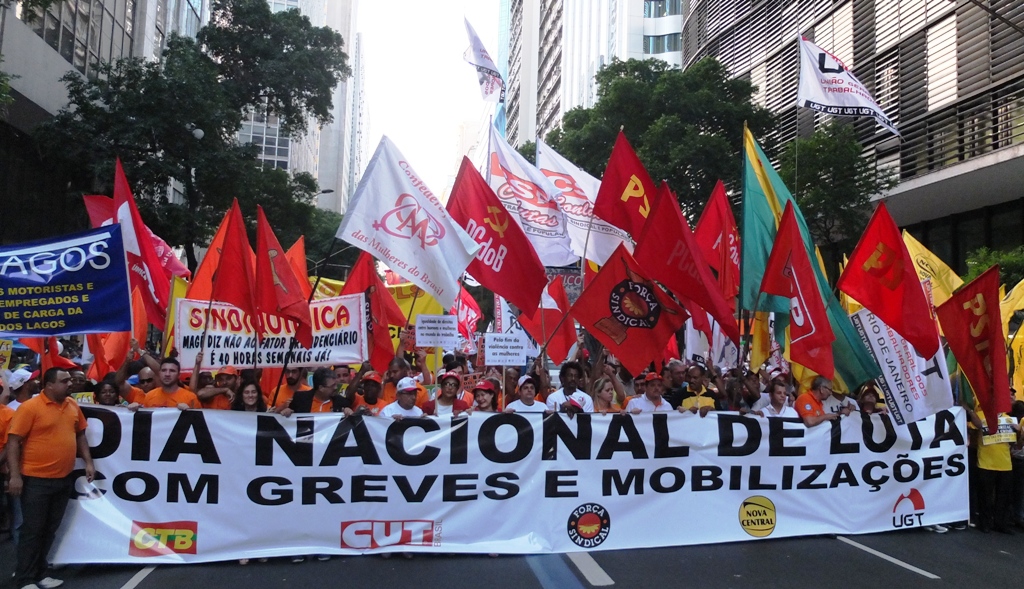 The crowd grew. A handful of men appeared, dressed in black, with masks.  “We are asking everyone to remove their masks,” one union leader said over a microphone. “We have nothing to hide. This is a peaceful protest. You can wave any flag you want, distribute any kind of pamphlet you want but please don’t wear masks because this will provoke the police and there are pregnant women marching with us.” At first it looked like people were listening.

As the protest progressed, Rio Branco Street filled up with people for over a mile. Union leaders estimate that there were only about 20,000 people there but they used tactics for filling up more space and there was nowhere where you didn’t have to push your way through the protest. 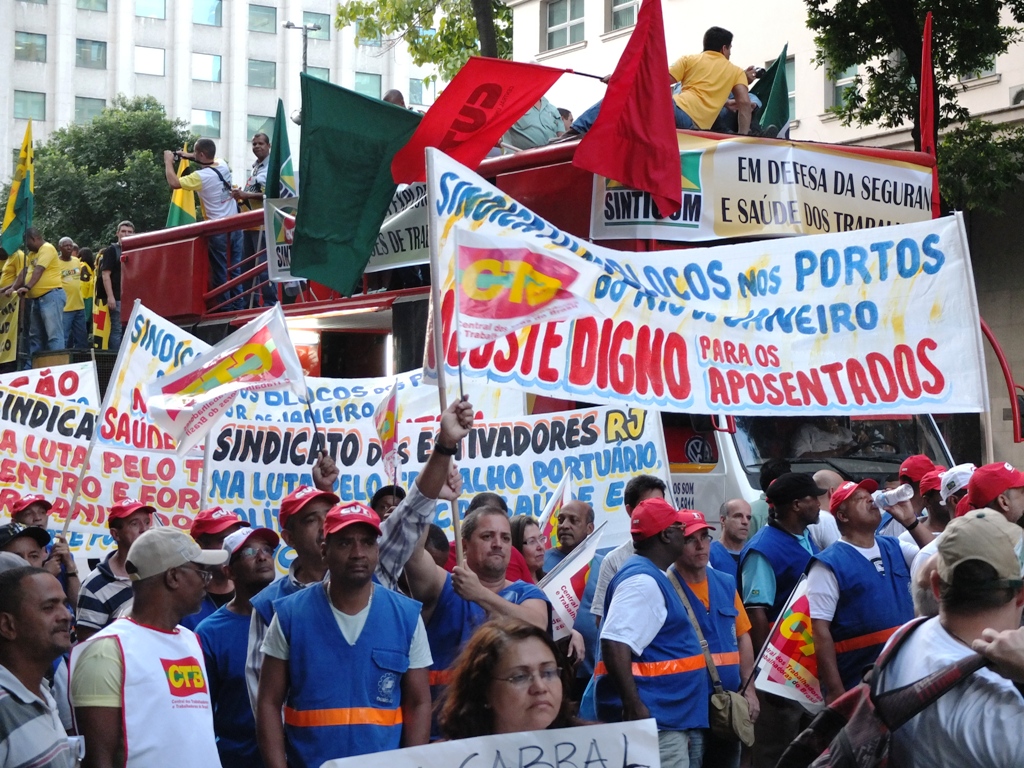 A few hundred anarchists began to congregate at the front of the protest. They moved forward and separated themselves from the union marchers. Suddenly a police infiltrator was identified among them. As an angry crowd gathered around him he pulled out a gun, shot it in the air and ran toward the police. They followed him and the police opened fire on the crowd with pepper spray grenades and rubber bullets. Chaos ensued. As a native Chicagoan it came as no surprise to me that a police officer, disguising himself as an anarchist, would trigger off a riot during a protest for the right to a 40-hour workweek.  Police reinforcements showed up with all the new crowd-control weapons that they seem to want to test before the World Cup, such as sound bombs and water tanks.

The unions tried to push forward and people sang the national anthem. The crowd turned back on itself as sound cannons roared and a tear gas cloud passed over the street. People fled in all directions.  The protest fell apart and failed to meet its planned end point on Cinelandia square. A few hundred people moved on toward the governor’s mansion to join a smaller protest that was coordinated via social networking sites.

Meanwhile, more and more information is coming out in the Brazilian media about U.S. involvement with the conservative opposition party PSDB. In March, Folha de São Paulo announced that PSDB had hired former senior advisor to President Obama, David Axelrod to consult on social media campaigning for senator and likely presidential candidate for the 2014 elections, Aécio Neves.  Yesterday, Carta Maior broke the story that Booz Allen, a company for which Eric Snowden had been a contractor, has been doing consulting work with the PSDB since the 1990s. The question remains whether or not this has anything to do with the social media campaigns that have fragmented the protests and created a general feeling of political instability in the country.

Brian Mier is a geographer and freelance jornalist who lives in Brazil and works as a policy analyst at the Centro de Direitos Economicos e Sociais.