Paraguay’s Massacre: Outcry and Support for Farmers Rises in the Face of Government’s Inaction 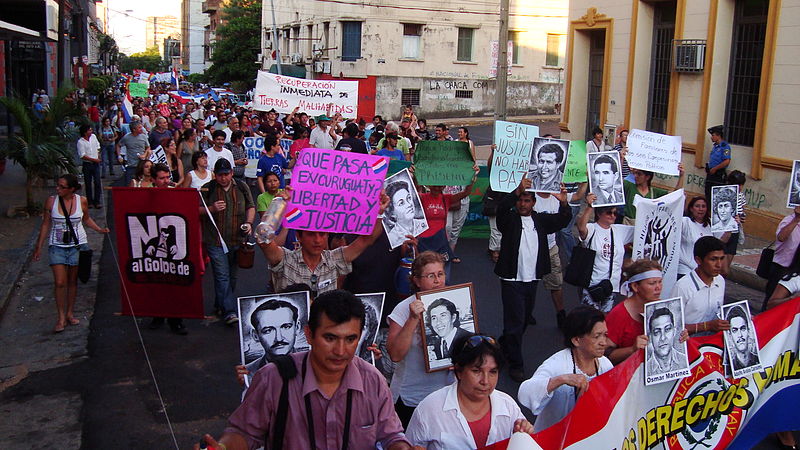 In 2012, a congressional coup brought down Paraguay’s President Fernando Lugo over allegations that he had mishandled the conflict between rural workers and the family of the late businessman and ex-senator Blas Riquelme over a 2,000 hectare territory named Marina Cué located in Curuguaty in the department of Canindeyú. In June of 2012, the conflict that had been escalating for years erupted in a violent land eviction effort that ended with the deaths of 11 farmers and 6 policemen. Federico Franco, the Vice-President, replaced Lugo and ruled until Horacio Cartes, from the Colorado Party, won elections in April 2013 and took office in August. Today the conflict remains unresolved and the drama is being played out in a scenario that reflects the vast and historic injustices for rural workers, an alarming concentration of land, and a nation with inadequate public institutions to serve and protect its citizens.

More than two years later, justice remains elusive. The trial of 13 farm workers accused of killing the 6 police officers, which had been scheduled for last Monday, November 17, has been postponed to June 2015. By then, the landless farmers, who face charges of land invasion, criminal association, and attempted murder, among others, will have completed 3 years of detention without having been convicted. They are unable to work and provide for their families, who are now in an even more precarious situation than when they settled in Marina Cué.

As many have noted, it is questionable that the investigation is led by the police and the Public Ministry, instead of by an independent commission like the one established by ex-President Lugo, which was to have been overseen by the Organization of American States (but was dismantled by Franco as soon as he took power). The government investigation’s one-sided conclusions blame the farmworkers for the killings, even though 11 of the 17 killed were farmworkers. The official version is that the farmers ambushed the policemen, and the police responded accordingly. Meanwhile, nobody is under investigation for the deaths of the 11 farmers. To the farmerworkers’ dismay, the Public Ministry quickly discredited alternative investigations that claimed there was no ambush attempt on the part of the farmworkers and that instead the police had fired on them indiscriminately.

Vicente Morales, a lawyer representing 11 of the 13 farmers, pointed out that “The cops were more than 300, with machine guns, helicopters, shotguns and grenades. And the peasants were no more than 50, malnourished, sick with dengue, and with children from one to three years-old that supposedly were being used as bait." He also pointed out that the ownership of the lands in Marina Cué is still in question, since it is an area, as is much of the land in Paraguay, that the dictatorship and post-dictatorship governments gave away to friends and family members. Nevertheless, the defendants are being charged with land invasion. This represents how superficial the current process is, paying no attention to the roots of the conflict and reflecting the still prevalent inequality, impunity, and favoritism for wealthy families. As Raul Zibechi of the Center for International Policy explains:

1% of the landowners control 77% of productive land, and 40% of farmers own only 1% of the land. 9.7 million hectares are concentrated among just 351 landholders, while there are 300,000 landless campesinos.

To reach these levels of land concentration and foreign ownership, the [Paraguayan] state and landowners have unleashed a war against the campesinado. In the 25 years since the end of the Stroessner dictatorship, they got the rural population to fall by almost 50%. The Chokokue Report, 1989-2013 by the Human Rights Coordinator of Paraguay (Codehupy) reflects this reality.

The repression and violence against rural workers in Paraguay and elsewhere in Latin America is nothing new, but the cynicism of the current administration regarding the “Curuguaty Massacre” is perhaps unprecedented.

Fortunately, the conflict has caught the attention of some policymakers in the United States who have called for a just ending to this conflict. Democratic Senator Patrick Leahy read a declaration [PDF] in front of the U.S. Senate on November 12, 2014, urging Presdent Cartes to resolve the dispute and allow the families affected access to land. Leahy and 11 other representatives signed a letter [PDF] to Cartes that read in part:

On that day, 11 farmers and 6 police lost their lives and many were injured during the forced eviction of some 60 landless farmers by over 300 police in riot gear from government land that -­ while claimed by a private company -- is recognized by institutions in your government as belonging to the Paraguayan State and intended for land reform.

As you know, accountability of public institutions is essential for societies to thrive. We therefore urge you to pursue a clear and fair resolution to this land dispute case, including a full investigation to ensure those responsible for the murders and reported human rights abuses on June 15, 2012 are brought to justice.

We also urge you to continue to move forward with implementation of agrarian reform policies consistent with Paraguay’s existing laws; this would help enable farmers in Curuguaty to acquire rights over the Marina Kue property in order to feed their families and ensure the livelihood of their community.

Additionally, La Via Campesina, Oxfam America, the Committee on U.S.-Latin American Relations (CUSLAR) and other organizations joined with a coalition of more than 40 organizations in Paraguay to push for an independent and fair investigation and comprehensive land reform. Six months of strong mobilization, as Oxfam Paraguay points out, brought together thousands of volunteers and support from countries in Latin America as well as from Germany, Spain, and the United States. The international campaign “Jóvenes sin tierra = Tierra sin futuro” (“Youth without land = Land without future”) collected 37,000 signatures of support from 60 different countries.

It offers hope that policymakers, organizations, and activists around the world are paying attention and pressuring the government of Paraguay to carry out a fair and independent investigation to bring justice to all the victims of the conflict. This would shed light on the irregularities of the current process and hopefully serve as a starting point to bring about more justice, transparency, and real agrarian reform in a country in which 1.6 percent of the population owns 80 percent of the land.