Further price rises would push the housing market into a new bubble.

The Case-Shiller 20-City Index rose by 1.0 percent in September, bringing its increase over the last year to 13.3 percent. Since bottoming out in January of 2012 the index has increased by 18.5 percent.

All 20 of the cities in the index showed price increases in September, although price increases in the western cities were especially strong. Prices rose by 1.6 percent in Las Vegas and 1.4 percent in both San Francisco and Phoenix. Prices in San Diego rose by 1.3 percent and by 1.2 percent in Los Angeles. However, not all the all big increases were in the west. Atlanta topped the list with a 1.9 percent rise in prices, with Cleveland next with a 1.6 percent jump. Prices in Detroit rose by 1.4 percent, while prices in Boston rose by 1.3 percent.

Prices for homes in the bottom tier in San Francisco, San Diego, and Los Angeles rose by 1.6 percent, 1.5 percent, and 2.1 percent, respectively. Over the last year, prices of bottom-tier homes in San Diego rose by 25.2 percent and in Los Angeles by 29.2 percent. The YOY increase in San Francisco has been 39.3 percent. Even markets not currently seeing sharp price increases had big rises at the bottom end. Prices for homes in the bottom tier in Chicago rose by 1.9 percent, in Tampa by 2.1 percent, and in Miami by 1.8 percent. The latter increase brought the YOY rise to 27.6 percent.

While the September Case-Shiller data suggest a very strong housing market with rapidly rising prices, other data point in the opposite direction. Seasonally adjusted existing home sales in October were down 3.2 percent from their September level and 5.0 percent from the peaks hit in the summer. Median and average prices were also sharply lower than in prior months, although these data do not control for the mix of homes and therefore are highly erratic.

Pending homes sales were down 1.2 percent in October and were down 8.3 percent from the peak reached in May. Similarly, the index for purchase mortgage applications has been trailing downward since June and has been running below its year-ago levels in recent weeks. This indicates a falloff in purchases by owner-occupants. The new home sales data, which is based on contracts signed, showed a sharp drop in July, but some bounce back in August. The September release was cancelled due to the shutdown and the October data will not be available until next month. The July and August data also showed sharply lower prices compared with spring peaks, but this series also does not adjust for the mix of homes.

The seeming contradiction between the strong price data in Case-Shiller index and the weaker data shown in the other series may be explained by the long lag in the data in the Case-Shiller series. The September price data is for the three months ending in September. This series is based on closed sales, not contracts signed, with a 6-8 week period between signings and closings, the September data is reflecting contracts signed in May, June, and July, a period that mostly preceded the spike in interest rates following Ben Bernanke’s famous taper talk. 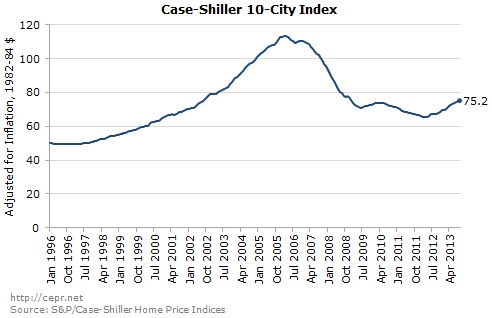 For these reasons, it is still possible that the talk did lead to the change in price movements implied by other data. If that proves not to be the case then the Fed should be seriously worried about the return of a housing bubble. Inflation-adjusted prices are approaching the level where analysts first began warning of the last bubble and many markets are likely already in bubble territory.

CEPR's Housing Market Monitor is published monthly and provides an incisive breakdown of the latest indicators and developments in the housing sector. Contact This email address is being protected from spambots. You need JavaScript enabled to view it. for more information or sign up to receive our data bytes via email.