Five Policies That Could Improve Job Quality in the United States

Despite increased educational attainment, an older workforce and higher productivity, job quality has declined in the United States over the last 30 years.

Washington, D.C.- Despite substantial increases in the educational attainment and age of the U.S. workforce over the last three decades, which are reflected in productivity, the quality of jobs in the United States as measured by wages and access to benefits has deteriorated sharply. A new report from the Center for Economic and Policy Research examines possible solutions to this paradox by evaluating the likely impact of several policies that seek to address job quality. While none of these policies in itself is a panacea, the authors demonstrate that each of these policies would make some progress in reconnecting improvements in overall economic growth to job quality.

The report, “Making Jobs Good,” considers the impact of five policies on job quality, in essence, “good jobs” and “bad jobs.” The authors draw upon previous CEPR research employing data from the Current Population Survey (CPS) to define both categories. A good job is defined as one that (1) pays at least $19 per hour (in constant 2011 dollars) and (2) has employer-provided health insurance and (3) has some kind of retirement plan (either a traditional pension or a 401(k)-style plan). A bad job is defined as one that meets none of these three criteria, that is, (1) pays less than $19 per hour and (2) has no employer-provided health insurance and (3) has no retirement plan of any kind. (The pay level corresponds to the median male wage in 1979.) The policies considered in the report are universal health insurance, a universal retirement system (over and above Social Security), a large increase in college attainment, a large increase in unionization, and gender pay equity For each of the policies, the authors simulate the impact on the total share of good (and bad) jobs in the economy in 2011 as well as on the three separate components of the good and bad jobs definition. These are further examined in terms of the impact of these policies by gender.

These policy simulations yield intriguing results. For instance, the pay equity simulation shows that if women and men of the same level of education receive the same pay, the gender gap in the share of good jobs is all but erased. The policy simulations also demonstrate that increasing unionization appears to be substantially more effective than a comparable expansion of college attainment in increasing job quality in the economy. For all workers, and separately for men and women, increases in unionization consistently raise the share of good jobs more than similar-sized increases in college education. Given that increasing college attainment is a long and expensive process, and one that is likely to be much less effective for older workers, these findings suggest the importance of emphasizing unionization as much or more than college attainment as a key path to improving job quality. 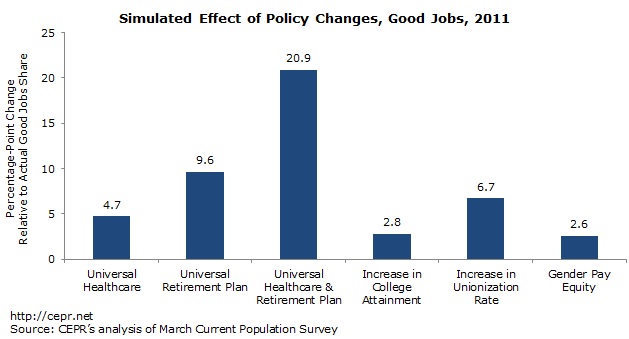 The authors note that restoring the link between economic growth and job quality will be a heavy lift. Over the last three decades, increased educational attainment and work experience alone have not been sufficient to prevent a decline in the share of workers in good jobs or an increase in the share of workers bad jobs. However, the simulations described here and others conducted in “Making Jobs Good” demonstrate that there are policies that -- alone or in conjunction with other policies -- can slow and perhaps turn around the fall-off of job quality in the U.S. economy.