A Wall Street Trading Tax Could Actually Save Grandma Money

Last week, I saw a lot of people in Washington, DC, donning jaunty green Robin Hood caps — but it wasn’t to celebrate Halloween.  They were nurses, environmentalists, economists, AIDS activists, and other folks from across the nation, all here to learn about and march for a financial transaction tax (FTT), a.k.a. the Robin Hood tax.

They were joined by renowned economists Jeffrey Sachs and Robert Pollin, who helped release a letter signed by 163 economists, including former Labor Secretary Robert Reich and CEPR’s Eileen Appelbaum, Dean Baker, and John Schmitt, supporting a tax on Wall Street speculation.  While the rate of the tax would be only a fraction of a percent, with the skyrocketing volume of trades happening every day, it would collect tens — or even hundreds — of billions of dollars per year.

Currently there are a handful of proposals before Congress for a financial transaction tax.  Representative Keith Ellison’s bill calls for a 0.5% tax on stock and lower rates (0.1% and 0.005%) on bond and derivative trades.  Senator Tom Harkin and Representative Peter DeFazio have companion bills with an across-the-board rate of 0.03%.

One of the worries raised when people hear about a Wall Street tax is that regular investors, especially retirees, would be impacted by this tiny fee.  The fact is that the vast majority of the tax would be paid by the financial world’s high-rolling speculators and high-frequency traders, who are effectively cutting in line by trading thousands of times per second, extracting profits ahead of the rest of us with their high-powered computers.

But there’s more.  Economic research has shown that traders respond to higher transaction costs by slowing down their rate of trading.  When a mutual fund manager reduces churning, that would likely result in LOWER overall costs for the regular investors in that fund.  For example, see the chart below. 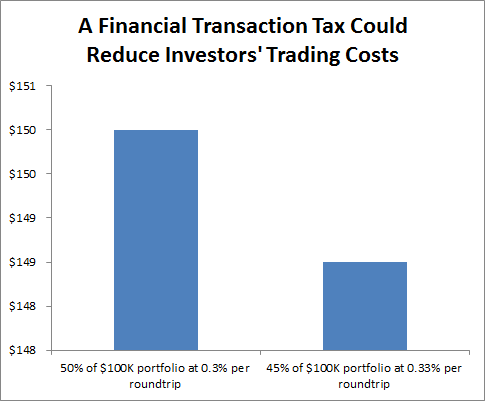 Let’s say that with transaction costs of 0.30% per trade, half (50%) of an investment portfolio is turned over per year.  In this case, the annual trading costs would total $150 per year.  With the addition of a 0.03% FTT, transaction costs would rise to 0.33% per trade, but the trader would respond by turning over only 45% of the portfolio each year.  Then the annual trading costs would total $148.50 — in other words, the regular investor would end up SAVING money.

Tamping down dangerous Wall Street speculation and reducing overall trading costs for Main Street investors and retirees.  Seems like a no-brainer.  That’s why many financial industry experts support this idea.  Including John Bogle, founder of the Vanguard Group, who says of the FTT: “I love it.”

Paul Krugman, China’s Demographic Crisis, and the Which Way Is Up Problem in Economics