CEPR hosted two events with Pablo Solón Romero Oroza, Plenipotentiary Representative for Integration and Trade Issues, Bolivian Ministry of Foreign Relations. CEPR sponsored a press breakfast on May 31 and a public presentation on June 1, on foreign investment in Bolivia. Much of the discussion focused on Bolivia’s precedent-setting move to withdraw from the investment dispute settlement arm of the World Bank, the International Center for the Settlement of Investment Disputes (ICSID). CEPR co-Director Mark Weisbrot introduced Ambassador Solón at both events and also provided background information on some of the issues.

The right of investors to sue governments directly, including for governmental regulatory actions that may diminish their profits, is a recent phenomenon, which the vast majority of such cases having been filed in just the last five years. It was a significant shift of power from governments to corporations, and one that some of the new democracies in Latin America seek to reverse, as they reclaim control over their natural resources and respond to the demands of their voters.

Among those attending the press breakfast were reporters from the Wall Street Journal, Reuters, Associated Press, Washington Trade Daily, the Spanish News Agency EFE, and by phone from South America, Bloomberg News and CNN. 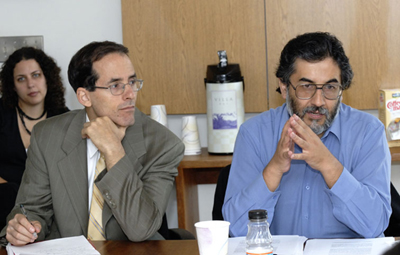 Pablo Solón Romero Oroza (at right) sits down with journalists to discuss the investment climate in Bolivia, May 31, 2007.  At left is CEPR Co-Director Mark Weisbrot.