There were 232 likely ICE Air deportation flights to Latin America and Caribbean countries between February 3, 2020 and April 24, 2020, CEPR analysis shows.

In 2019, Immigration and Customs Enforcement (ICE) deported 267,258 individuals — 96 percent of whom were from the Latin America and Caribbean region. Though much of the media focus has been on Mexico (49.7 percent of the total) and the Central American nations of Guatemala, Honduras, and El Salvador (together 45.1 percent of the total), ICE deported at least one person to every country in the LAC region in 2019. Ten countries in the region accepted regular deportation flights conducted by ICE’s air operations — known as “ICE Air” — last year.

While the vast majority of deportations to Mexico take place over land, ICE Air flies tens of thousands of people across the country and across the world each year. Amid the global pandemic, which has led to countries shutting down air travel and closing borders, ICE Air continues to deport thousands of immigrants held in detention centers throughout the United States. Those facilities themselves have become hotspots of COVID-19 outbreaks, meaning the US is now exporting the virus to countries throughout the region.

Despite the prevalence of ICE Air deportation flights, and the grave risk to public health that their continuation during the global pandemic presents, little is known about their frequency and destinations. However, a new analysis of flight tracker data sheds some much-needed light on the scope of ICE Air flights and the extent to which countries in Latin America and the Caribbean are affected by continued deportations. Since the Trump administration declared a national emergency on March 13, one ICE Air contractor has flown at least 72 likely deportation flights to 11 Latin America and Caribbean nations — including to Brazil and Ecuador, which are suffering the region’s worst outbreaks of COVID-19, and which have both experienced an increase in deportation flights under the Trump administration.

From March 15 to April 24, ICE Air appears to have made 21 deportation flights to Guatemala; 18 to Honduras; 12 to El Salvador; six to Brazil; three each to Nicaragua, Ecuador, Haiti, and the Dominican Republic; and one each to Colombia and Jamaica. All likely ICE Air deportation flights since February can be seen in the interactive map below.

In 2019, researchers from the University of Washington Center for Human Rights (UWCHR) obtained ICE flight records from 2010 to 2018 following a Freedom of Information Act request. The UWCHR analysis provided the most complete analysis of the extent of ICE Air operations, and their full dataset is available here. Their report also revealed that two private charter companies — Swift Air and Western Atlantic Airlines — conducted the majority of ICE Air deportation flights as subcontractors.

The data analyzed in this post was collected from Flight Aware, a public flight tracker database. Because both Swift and Western perform regular charter services, not all of their flights are part of ICE’s deportation system. However, the flights included in this analysis match known deportation trips, depart from airports known to be used for deportation flights, and follow routes known to be associated with the transport of ICE detainees. While it is possible some of the flights included here were not deportations, it is more likely that this data represents an underestimate of the extent of ICE Air’s operations. ICE is also known to use commercial airlines for deportations and it remains possible that additional charter companies are contracted by ICE. In fiscal year 2017 more than 85 percent of ICE Air deportations were conducted through charter services, according to the Department of Homeland Security (DHS) Inspector General.

In the first three months of 2020, ICE deported an average of 20,833 individuals each month — on pace for a similar annual number as in 2019. In contrast, the Washington Post reported that in the first 11 days of April 2020, ICE deported 2,985 people — less than half that rate. Indeed, the flight tracking data analyzed here shows a decrease in deportation flights beginning around March 13 — as can be seen in the table below.

The drop visible in the table above appears to result from the stoppage of Western Atlantic’s international charter flights on March 13 — when the US declared a national emergency. ICE Air’s other subcontractor, Swift Air, has continued flying. Despite growing restrictions on international air travel, Swift had almost exactly as many flights from the US to Latin America and the Caribbean in March as it did in February — though that number has decreased some in April. (In recent months, Swift-owned airplanes have made trips to an additional number of countries in the region, including Cuba, Suriname, Peru, Bolivia, Trinidad and Tobago, Aruba, Belize, and Grenada; however those flights did not match up with known deportation flights and have been excluded from the analysis.)

Though much attention has been paid to recent deportation flights to Guatemala and Haiti — both countries have reported confirmed COVID-19 cases among those deported — the data reveal that many other countries are likely experiencing the same phenomenon.

In 2019, the Trump administration began ICE Air deportations to Brazil, which had previously blocked such flights. The United States relies on foreign governments to approve deportation flights, and under the leadership of Trump-ally Jair Bolsonaro, Brazil acquiesced. Flight data indicate that those flights have continued during the pandemic. Since March 13, there have been six flights conducted by Swift Air to Belo Horizonte, Brazil — the destination of previously reported deportation flights. Brazil is currently experiencing the largest outbreak of COVID-19 in the region.

Some of the Swift Air flights to Brazil have first made a stop in Ecuador’s port city Guayaquil — home to perhaps the deadliest outbreak of COVID-19 in the world. Deportations to Ecuador increased by 78 percent in 2019 compared to the year prior as, similar to the Brazilian government, Ecuador has sought to bolster relations with the Trump administration. As can be seen in the table above, likely deportation flights to Ecuador have decreased since the onset of the COVID-19 pandemic. However, there have still been three since March 13 — including an April 17 flight to Quito that contained at least 70 individuals, according to immigration attorneys.

Interestingly, while deportations to Mexico have continued — one recent deportee has since tested positive and spread COVID-19 to at least 13 others — the regular ICE Air flights from San Diego and the Phoenix-area to Guadalajara appear to have halted since March 16. Those flights had formed part of an agreement between Mexico and the US to deport individuals to the interior of the country.

ICE Air Poses a Threat at Home and Abroad

The majority of the flights analyzed departed from two airports well-known to be ICE deportation locations: Brownsville, Texas and Alexandria, Louisiana. The Alexandria ICE staging facility, which is run by the private prison company GEO Group, has been particularly hard hit by COVID-19, with at least 11 employees testing positive. The plane that brought an estimated 40 confirmed COVID-19 cases to Guatemala last week departed from the Alexandria airport.

Overall, the Guatemalan government has estimated that 20 percent of the country’s confirmed COVID-19 cases are recently returned immigrants. 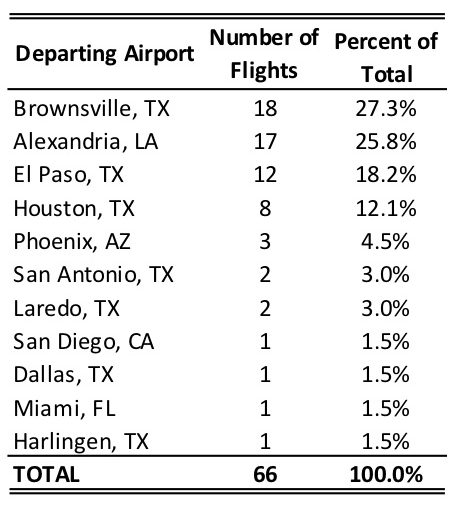 Despite the obvious public health concerns, ICE has so far refused to test detainees prior to deportation — though officials have recently indicated they would begin at least partial testing. The Washington Post reported that ICE “is unlikely to administer tests to every deportee unless foreign governments make that a condition for taking people back.”

The reality is that, in the shady world of ICE Air, the public has little clue as to the extent of the transportation of detainees — not just internationally but domestically. ProPublica reported last month that one detainee was flown across the United States nine times in a matter of 10 days. That case was not unique. Public health experts have warned that ICE detention centers pose a serious health risk to those held inside — as well as to employees and surrounding communities. Because detainees are often flown across the country and are held in closely confined spaces, it is virtually impossible to adequately isolate those who have contracted COVID-19 or to ensure that those deported have not been exposed to COVID-19.

Some US municipalities have taken it upon themselves to push back on ICE Air’s deportation racket. In 2019, King County in Washington banned ICE from conducting deportation flights from its local airport — though the Trump administration has since sued the local authorities. But it appears some communities are attempting to follow suit amid the global pandemic. Local leaders in El Paso recently raised concerns over continued deportation flights after an ICE flight carrying a passenger with a confirmed case of COVID-19 passed through the municipality-run airport.

But ICE Air is big business; from 2010 to 2017, ICE spent an estimated $1 billion on the program. In 2017, the Trump administration awarded a new primary contract to Classic Air Charters — the same company used as part of the CIA’s black site rendition program during the Bush administration. The ICE contract has an expected value of more than $300 million. Already in 2020, ICE has disbursed more than $90 million under the contract. Because both Swift Air and Western Atlantic operate as subcontractors, there is no public information on the value of their contracts with the federal government. The New York Times reported in 2017 that Swift took in an estimated $15 million per year from the government. ICE Air contractors charge about $8,000 per flight hour — regardless of the number of passengers. In 2019, iAero Group and Blackstone — one of world’s largest private equity firms — purchased Swift Air, though it continues to operate under the same name.

Over the last 12 weeks, it appears that ICE has used 22 unique charter planes for 232 likely deportation flights. Of those planes, 15 participated in confirmed ICE Air deportation flights between October 2018 and May 2019, the most recent data compiled by UWCHR.

Previously, flight tracking software allowed users to see all flights with the call sign “RPN” for “repatriation.” However, it appears that service is no longer accessible and that current ICE Air flights are no longer using the RPN designation. A full list of likely deportation flights since the beginning of February is available here (the data will be updated regularly). The data includes the tag numbers of the 22 planes identified in an effort to promote public awareness around ongoing deportation flights.

Of course, it remains possible that some of these flights reflect regular charter services and not ICE deportation flights. Last week, citing a local airport official, the Miami Herald reported two Swift Air flights were deportation flights to Honduras and Brazil. The official, however, later said he had been “mistaken” and told the Herald the planes had been chartered by Royal Caribbean. If you have information that one of the listed flights was not in fact an ICE Air deportation flight, or if there is a known deportation flight missing from the list, please contact the author ([email protected]).

[Data update: Since the data was collected for this analysis, two additional flights have been added to the likely ICE deportation flight database. These flights help illustrate how the data may be helpful in identifying deportation flights moving forward. On Monday, April 27, a Swift Air flight departed Houston, Texas headed to San Pedro Sula, Honduras. This is the fifth consecutive Monday in which a Swift Air flight traveled to San Pedro Sula. On Tuesday, April 28, a Swift Air flight departed Houston, Texas headed toward San Salvador, El Salvador. This is the sixth consecutive Tuesday a Swift Air plane has flown to San Salvador. On the other hand, on April 27, a Swift Air plane flew to Guatemala but that trip used a flight number not previously associated with known deportation flights and is excluded from the dataset.]

Gaslighting on the Big Lie by Thomas Edsall in the NYT

Why Pay Less? The US Strategy for Vaccinating the World