Donald Trump boasts endlessly about the economic recovery and insists that people are doing great now. The numbers disagree.

We will get the last employment report before the election on Friday. The unemployment rate reported for August was 8.4 percent. We’ll see what happens on Friday, but we are not doing especially well compared to other countries. Here’s the picture. 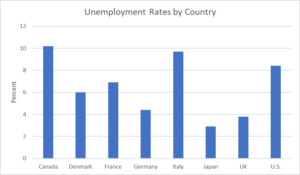 In short, the economy has come back a long way from the middle of the shutdown in April, but it still has far to go. And workers in many other countries have done much better.

As Trump might say, numbers have been very bad to him.