Port-au-Prince – Some 24 hours before making an appearance in Hollywood at the Golden Globes, former President Bill Clinton was in Haiti on January 12, commemorating the three year mark since the Haiti earthquake and remembering the hundreds of thousands who died. The Haitian government held another ceremony, without Clinton, earlier in the morning where the national palace once stood, in what the AP described as “purposely low-key.” Other than the beefed up security and stream of official vehicles entering the grounds, life around the former palace gates seemed little different than most days, though local church services picked up throughout the morning. Unable to enter without being on an official list, those passing by peered in at the distant ceremony behind the gates.

Meanwhile, about 25 kilometers north, in Titanyen, the burial site for many of the earthquake’s victims, as well as victims of the Duvalier dictatorships, another steady stream of official vehicles was arriving. These belonged mainly to what appeared to be members of the diplomatic corps, as well as a number of Haitian and foreign journalists. Clinton was also there, arriving well before Haiti’s President Martelly and Prime Minister Lamothe made it to the “barren hillside at the outskirts of Haiti’s capital.” 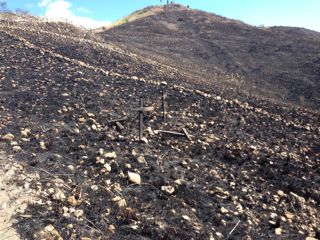 There was an eerie feeling at the site. Just the day before, the hundreds of memorial crosses which once dotted the hillside had apparently burned, leaving a backdrop of scorched earth. A few crosses were still standing amidst the burnt grass. Adding to the strange feeling was that other than the officialdom and journalists present, there was a noticeable lack of “people”. Apparently not many had decided to make the trip, if they were aware of it at all. Once Martelly arrived from the ceremony in Port-au-Prince, the entire event with Clinton lasted less than 30 minutes. Neither Martelly nor Clinton gave a speech.  Journalists got photos of the two of them together, and as quickly as the motorcades had arrived, they left.

There was no public reflection on what has happened over the past three years or whether Clinton’s brief visits to Haiti had resulted in “building back better,” as he had envisioned. It seemed like little more than a haphazardly planned photo-op.

The same afternoon, a different ceremony took place back in Port-au-Prince at the Asanble Vwazen Solino (Solino Neighbors Assembly), a community center and school that has been around since 2006, where a participative commemoration was held with local residents. Esaie Jules Jelin, a member of the coordinating committee at AVS commented, “it was an open invitation, everyone was encouraged to participate and interact, not just sit and listen. We wanted people to understand the difference between the rhetoric and the reality.”

The rhetoric Jules Jelin spoke of was what one can hear from the Haitian government, the international community and many of the international organizations present in Haiti, that indeed, recovery and reconstruction has been progressing. The reality in Solino, however, was very different.

Jules Jelin told the story of residents of a nearby tent camp, which had been cleared out with the help of a Catholic Relief Services rental subsidy program. The residents were given some funds to move out of the camp and find apartments, though as Jules Jelin noted, the money was generally not enough to find a good place, if any place at all, and that “eventually they will have to return to the street.” He added, “think about what the NGO’s have done in the past. They [camp residents] were given water, then it was taken away, given toilets, then they were taken away, given a little job, then it was taken away. This created the situation where people had to accept what was offered, because it could be taken away at any time. Now they went back to the damaged houses they fled from, just returning to the same situation as before. These are the people who came together to discuss the situation on the 12th.”

A discussion was held where James Olrich of Bri Kouri Nouvel Gaye and Mark Snyder, a housing rights advocate, spoke of the ongoing conditions in camps and the problems of forced evictions, and addressed the question of “where did the money go?” Jules Jelin added, “We wanted to educate the people so they could understand what the reality of reconstruction is, after all the money, why are things still so bad?”

Snyder added, “It was the actual community deciding to come together to pay respect to their family, neighbors, and fellow Haitians who perished or suffered great loss from the earthquake three years earlier. It is a model for true inclusion for the visiting NGOs or UN entities in Haiti to strive for.”

Compared to the Clinton photo-op earlier in the day, the differences could not have been starker. It was a time of reflection, to look back at what has and has not happened and to engage with those whose lives have been most affected by the earthquake and the ongoing international and national response. “You can look all around you and see the country destroyed but not do anything about it. We try to make people aware, and then they can take action,” said Jules Jelin.