In the Making: A Very Brazilian Coup?

Writer and filmmaker Pablo Villaça has weighed in with a scathing assessment of what appears to be a concerted effort between the Brazilian opposition, the Supreme Court and the national media to remove President Dilma Rousseff from office over her alleged manipulation of government accounts. Rousseff’s administration has been marred by a combination of economic recession, austerity measures and a growing corruption scandal involving state oil company Petrobras and top officials in her center-left Workers Party (PT).

There is no doubt that some officials within the PT have been heavily involved in corruption. Yet there is no lack of irony in the notion that Brazil’s centrist and right-wing opposition might sincerely be lending a helping hand to anti-corruption efforts. As The Intercept has astutely noted, most of the opposition parties working to impeach Rousseff are themselves “drowning in at least an equal amount of criminality” for the explicit purpose of personal gain – which Rousseff is not accused of, as Glenn Greenwald explains:

Questions must be asked as to whether, having been kept out of office by the PT’s electoral successes since 2003, the opposition and its mostly elite and upper-middle-class supporters have now turned to other means in their latest attempt to recapture the presidency.

And as Villaça points out, the Brazilian news media’s predictable failure to meet any standard of objectivity regarding Rousseff and the PT has manifested itself yet again. The following graphs from independent media critics Manchetômetro are particularly illustrative. The first shows predominantly negative print coverage of Rousseff week after week, while the second demonstrates a consistent tendency among the print media to present the PT through a much more critical lens than any of the other major parties. 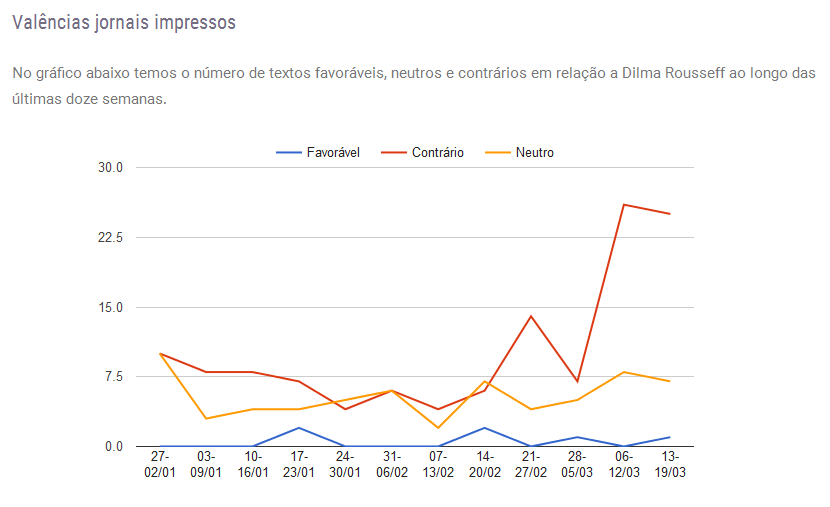 “Balance in print publications. In this graph we have the number of favorable, neutral and unfavorable articles relating to Dilma Rousseff over the last 12 weeks.” 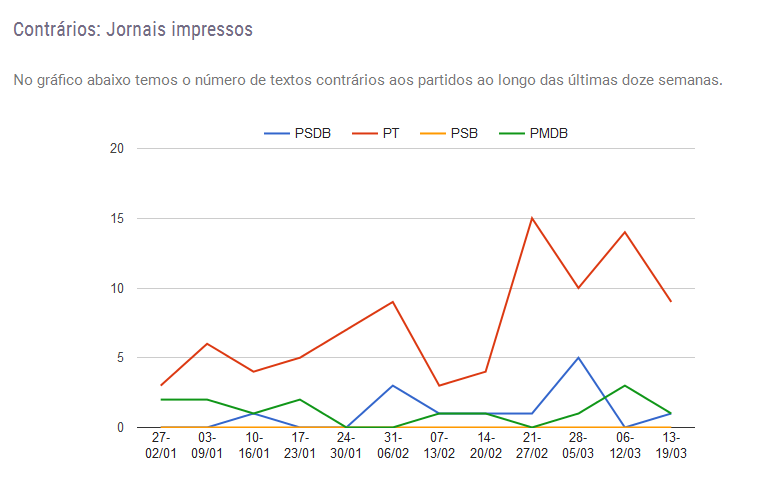 “Negative coverage: print publications. In this graph we have the number of articles with an unfavorable view of each political party over the last 12 weeks.”

As we found during the 2014 elections, the Brazilian media’s open hostility to the PT, Rousseff and her predecessor Luiz Inácio Lula da Silva is nothing new: A clear and persistent bias against the PT and its candidates dates back as far as the 1990s, when then President Fernando Henrique Cardoso of the center-right PSDB received much more favorable coverage than Lula or Rousseff.

Those of you that have been following me for a while know that I often write about the need for serenity in politics. I have said countless times that It is not acceptable to treat political opponents as enemies. I have pointed out that violence undermines the political debate.

This posture has always come naturally and effortlessly to me. But unfortunately, in the last few days, I have to force myself to keep my cool. If the events of Thursday and Friday [March 3 and 4] achieved anything, it was to radicalize even those who took pride in their moderation.

On Thursday [March 3], a plea-bargaining statement, not yet approved by the Supreme Court (and even if it were, it should be confidential) was leaked to the news magazine Isto É. While the alleged informant refused to confirm it, the Attorney-General, who was supposed to take the statement, was even more emphatic: he denied its existence. This has not prevented Globo network and its accomplices from transforming the so-called statement into a massive headline scoop. If the informant, Senator Delcídio Amaral, was previously portrayed as unscrupulous, all of the sudden his word became law –no more evidence was required. Delcídio has said it, and that was that. Until, of course, he refused to confirm the statement, and was, once again, summarily ignored.

Around 2am on Friday, the editor of the news magazine Época (linked to Globo), who has long ceased to even pretend to have any journalistic objectivity, tweeted twice about an operation from the Federal Police that would take place hours later. An operation that should be confidential, but that was leaked to the press ten days ago (as blogger Eduardo Guimarães had warned a week before). Before the Federal Police arrived at Lula’s home, a Globo helicopter flew over it, and Folha reporters were waiting at the door. Yet the LAWYERS of the former president had not been notified.

But the worst abuse was yet to come: Lula was subjected to the humiliation of being detained for questioning, even though he had not been previously summoned to testify. The abuse was so egregious that two Supreme Court Justices (one of them a critic of the left) have condemned the action.  Respected jurists and even (gasp) a founder of the opposition party PSDB, Bresser Pereira, have also condemned it.

The abuse, of course, was ignored by Globo and its cronies. The Jornal National has even extended its broadcasting for half an hour to celebrate the operation. When the Workers’ Party headquarters was attacked in Belo Horizonte on Saturday, Globo labelled it a protest, when it was clearly an act of violence. When similar events happened in another state capital, the channel actually INTERVIEWED the “demonstrators.”