There have been some reports that rents have been rising in many areas, ostensibly due to the fact that people who have lost their homes are now being forced to find rental housing that is in short supply. This really does not make sense as a national phenomenon. Rental vacancy rates continue to be at near-record levels, exceeded only by the peaks reached in 2009 and 2010 near the trough of the recession.

There also is zero evidence of upward pressure on rents in the CPI series. The owners’ equivalent rent series, which pulls out the impact of utilities and exclusively measures rent of shelter, is below its pre-recession level after adjusting for inflation. If anything, it has trended slightly downward over the last two years. This index includes all housing units, not just those on the market, so it will have more inertia than an index that just measured market rents, but it is difficult to imagine that market rents could have risen too rapidly if the CPI series is showing a real decline. 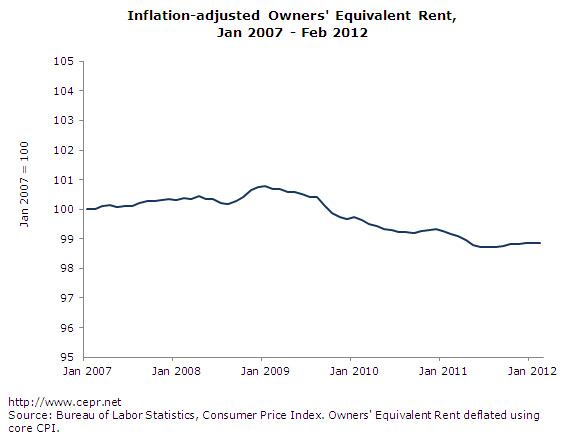 For more, check out the latest Housing Market Monitor.