The Labor Department reported the economy added 203,000 jobs in November after adding a revised 200,000 in October, the first time the economy has seen consecutive months of 200,000 plus job growth since November and December of last year. The strong job growth led to a drop of 0.3 percentage points in the unemployment rate to 7.0 percent. This drop was due to increased employment as the employment-to-population ratio (EPOP) rose by 0.3 percentage points to 58.6 percent, reversing a fall of the same amount reported for October.

The data on the establishment side was especially impressive because the jobs gains were broadly spread across industries. Manufacturing added 27,000 jobs after adding 16,000 in October. This is the largest two month gain since February and March of 2012. Interestingly, even the non-durable sector has been increasing employment, driven largely by food, adding 10,000 this month. Construction also showed gains, adding 17,000 jobs, the third consecutive month of double digit job growth.

Retail and health care were both strong again, adding 22,300 and 28,400 jobs respectively. The number for health care was somewhat high, but the average for the last two months of 23,400 is pretty much in line with its average over the last year. Retail has been creating jobs at an extraordinary rate recently, adding an average of 34,000 a month since March. Some of the growth the last two months may reflect the changed timing of holiday hiring. Retail added 121,700 jobs in October and November of 2012, as worried shoppers prepared for the fiscal cliff. Another likely seasonal fluke was a reported increase of 30,500 jobs in transportation and warehousing. Employment in this sector is erratic; this increase will likely be at least partially reversed next month.

In addition to the growth in jobs, there was an also an uptick of 0.1 hours in the length of the average workweek. This could suggest more employment growth in future months. The index of total hours worked increased by 0.5 points, tying the previous record for the upturn. There is zero evidence of accelerating wage growth in this report. The average hourly wage rose at 1.7 percent annual rate over the last three months, down from a 2.0 percent rate over the last year.

The data on the household side was overwhelmingly positive. In addition to the decline in unemployment, the number of people involuntarily working part-time fell by 345,000 (voluntary part-time rose by 200,000). In another positive sign the November number for discouraged workers 217,000 less than the year-ago level. The number had been higher than the year-ago level in the prior 5 months. 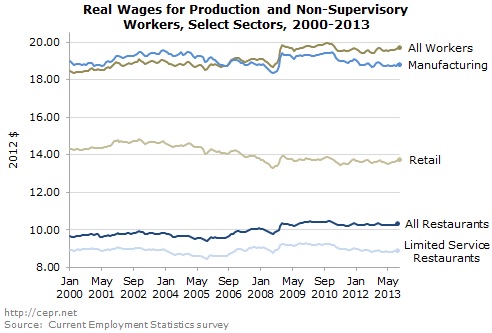 One interesting item in the household survey is evidence of an improvement of the labor market situation of the immigrant population relative to the native born. Over the last year, the EPOP for foreign born workers rose by 0.8 percentage points  from 61.1 percent to 61.9 percent, as their unemployment rate fell from 7.7 percent to 6.3 percent. By contrast, the EPOP for the native born actually fell from 58.4 percent to 58.1 percent, even though their unemployment rate also fell, dropping from 7.3 percent to 6.7 percent. Part of this difference is explained by demographics, since the native born population is older and more likely to be retiring. However, this is not likely the major factor since the EPOP for native-born women did not change over the last year while the EPOP for men fell by 0.5 percentage points. These data are erratic, but they suggest many native-born men are not sharing in the benefits of recent growth.

On the whole, the November report is clearly positive; however, it is important to keep the numbers in perspective. With the economy still down more than 8 million jobs from its trend path, even if it sustained a growth rate of 200,000 jobs a month, it would still take more than six years to make up the ground lost in the downturn.

PREVIEW: What the October Jobs Report Will Tell Us