No Time for Retirement

This may be having an effect on the job market. When my colleague Kevin Cashman and I were putting together an age-adjusted employment-to-population (EPOP) ratio to track recovery in the labor market, we split employment amongst six different age groups: Americans aged 16 to 24, 25 to 34, 35 to 44, 45 to 54, 55 to 64, and 65 and over. We found that while employment rates had fallen significantly during the recession for Americans under 65, employment had actually gone up for those 65 and over. One possible explanation for this rise is that insufficient pensions and savings are forcing many Americans to work longer than they would otherwise prefer. 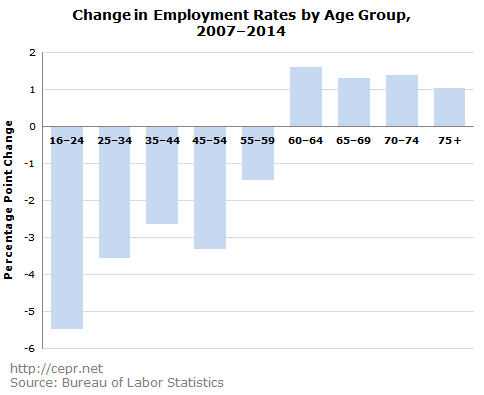 Moreover, while there is no one specific “retirement age,” changes in employment rates seem to show a break right around the ages we typically associate with retirement. Using the BLS’ most specific breakdowns by age, Americans were employed at the following rates in 2007: 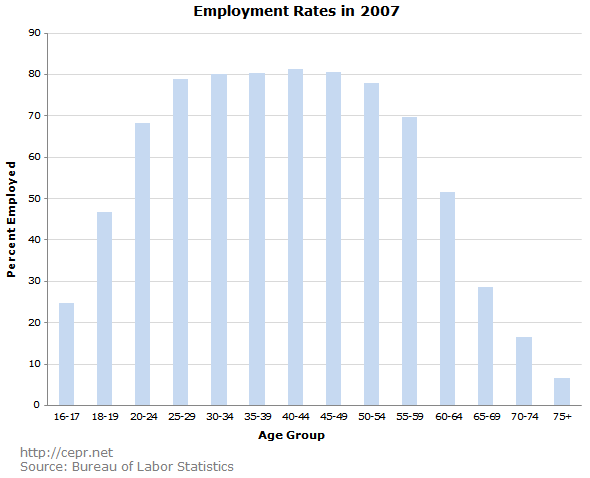 It is important to keep in mind that the increase in employment amongst retirement-age Americans has occurred in the context of an exceptionally weak labor market. Employment fell for all age groups 59 or younger during the recession; these groups have since recovered 31 to 43 percent of their lost employment. By contrast, employment is more than fully recovered for Americans aged 60 to 64, and employment never fell at all for even older Americans:

This indicates that Americans are increasingly likely to be working in what formerly had been their retirement years. While we can’t say for certain why this is occurring, it is certainly plausible that it is a result of the decline in household wealth for older Americans.

A more benign explanation is the improving educational profile of retirement-age Americans. The baby boomers in general have higher levels of educational attainment than the generations that preceded them; with more baby boomers moving into retirement age, we can expect the educational profile of retirement-age Americans to improve, which should in turn result in higher rates of employment. This possibly explains a sizable portion of the increase in employment among workers aged 60 to 69. Yet faced with the prospect of little retirement income other than Social Security, many older workers are likely forced to put off retirement and continue working long past their ideal retirement age.

If this is true, it means that we should be expanding rather than cutting Social Security. This would improve the well-being of older Americans who could retire at the point they expected. It may also help younger workers who could apply to the vacancies created by older workers’ retirements. If older Americans are working longer into their retirement years because they’re unprepared for retirement, everyone may gain from an expansion of Social Security.

Costly Big Business Favors Almost No One Knows About

As the Affordable Care Act Enters Adolescence, US Health Care Still Has Growing to Do

Request for Information on the Prosperity Gap Submission to the Select Committee on Economic Disparity and Fairness in Growth of the U.S. House of Representatives