Brazil has a housing shortage of around 5.8 million units, while there are around 6 million vacant units in empty houses and buildings located mainly in the downtown areas of its large cities. Urban social movements have historically tried to resolve this problem by coordinating squatters’ occupations of empty buildings, and they have successfully pressured the government to legalize these activities, resulting in some of the world’s most progressive property rights. Articles 182 and 183 of Brazil’s 1988 Constitution guarantee that the social function of property overrides the profit motive.  After a decade of protests and advocacy, in 2001, these amendments were further defined through the complimentary Statute of the City legislation. According to Brazilian law, buildings that do not fulfill their “social function,” that are left vacant and owing property taxes can, after a certain period of time, be taken over by people who don’t own any property of their own and converted to low income housing at the government’s expense. Unfortunately this law, like many other progressive laws of its kind in Brazil, is ignored by many local governments.

According to Evaniza Rodriques, from the União Nacional de Moradia Popular (National People’s Housing Union, or UNMP) there are around 35,000 people squatting in 60 abandoned buildings in São Paulo’s downtown region, trying to pressure the government for ownership.  Currently, 30 of these buildings are undergoing legal processes to be returned to their former owners. As the violent eviction of hundreds of people from a building on São João Avenue in downtown São Paulo last week shows, military police violence against squatters groups is increasing.

Benedito “Dito” Barbosa is a lawyer and founding member of the Central de Movimentos Populares (People’s Movements Central, or CMP).  Earlier this year, while trying to communicate with his clients during a technically-unconstitutional mass forced eviction in downtown São Paulo, Dito, a man of humble origins in his 50s, was beaten, choked and dragged down the sidewalk by Sâo Paulo military police.  It was not an isolated incident. There have been seven cases of lawyers beaten by police while trying to perform their duties during mass evictions in São Paulo this year. 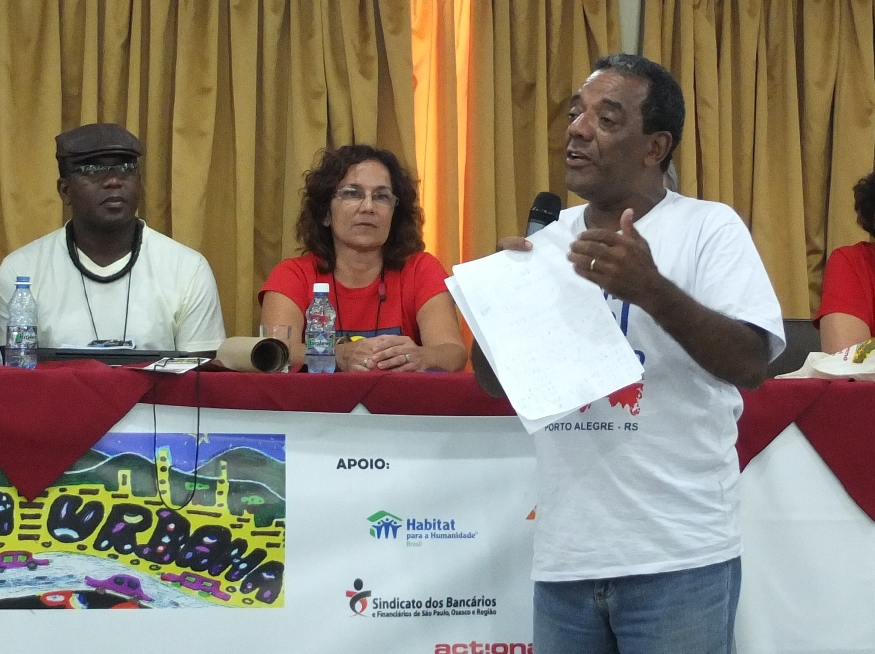 Question: There is a wave of forced evictions going on in São Paulo and it looks like the police are using a new strategy of trying to prevent lawyers from defending the tenants during the process. Can you explain what is going on?

Dito Barbosa: I want to make two things clear. Here in São Paulo we are going through a moment of mass evictions but we can’t say that it is an isolated issue. This is a problem in all of the big cities in Brazil at the moment. We have witnessed renewed violence during acts of land reintegration, with more violent forced evictions all over the country, especially in the big cities.

There are two factors that I think are associated with this process. First of all, there has been a big increase in real estate speculation in Brazil during the last few years, associated with large urban infrastructure projects. It’s hard to say which came first, the chicken or the egg. Was it the real estate speculation or the forced evictions? We know that one is a consequence of the other. The other factor is the extremely conservative posture of the judiciary, which associates itself with the real estate industry. It has sided with real estate speculators, slumlords and owners of vacant buildings in a huge number of court cases especially in São Paulo but all over Brazil as well in the past few years. These are empty buildings that don’t fulfill their social function but the judges continually grant favorable decisions to the real estate speculators and when they do, they annex a request for military police action authorizing them to break down doors and physically remove the residents and anyone else who happens to be in there at that moment. So, the military police violence is supported by the state apparatus and the judiciary giving it this, shall I say, legal appearance for the actions which, in my opinion, happen outside of the law, because they disobey the Statute of the City and they disobey the Brazilian Constitution. So military police violence during forced evictions is a common occurrence in São Paulo and you see that the actions are extremely violent and disrespectful to the building residents to the point where we had last September 16, when the police rounded up an enormous number of people, including children, women with babies and people in wheelchairs and took them to the station. This disrespected basic human rights. And these types of actions by the police are accompanied with a systematic persecution of human rights workers. 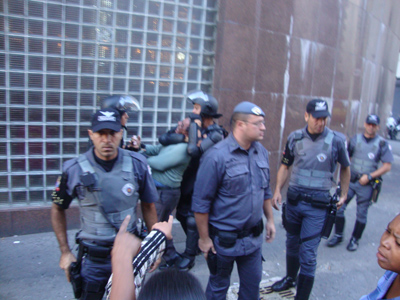 It’s not just lawyers who suffer from this violence, it’s everyone involved in the defense or support of these groups of people threatened with eviction. They are threatened and intimidated by the police and by the judiciary repeatedly and many times they are victims of violence and repression from the São Paulo state military police. This was a violent week here in São Paulo. On September 16 a police officer shot and killed an unarmed street vendor in Lapa on the West Side. In other words, while he was trying to prevent street vendors from working he got violent and killed one of them. So these are the facts that show how violent the São Paulo military police are.

Q: Do you think that this new wave of attacks against lawyers and human rights workers in São Paulo, along with the increase in mass forced evictions is serving political objectives because of the gubernatorial elections coming up? Do you think it represents a conflict between the PSDB [Brazilian Social Democratic Party] state government, which controls the police, and the PT [Workers’ Party] Mayor’s Office?

DB: I don’t believe that this is the result of a fight between the mayor and the governor because the mayor told the papers and news crews that the residents should leave peacefully.  He also said that the police should not act violently; in other words he’s sitting on the fence on this issue and he made no effort to defend the residents. To the contrary, his attitude generated a revolt among some of his supporters among the social movements that have been pressuring him to act more on this issue.

What I see is really happening is that there is an alliance between the State and the private sector here in São Paulo that is supported by the judiciary, who many times refuse to speak with human rights lawyers, because we have systematically requested audiences with the Court of Justice. We have filed motions and petitions – the Movimento de Trabalhadores Sem-Teto [Homeless Workers Movement, or MTST] even held a big protest in front of their building. The court president created a commission for crises management to act on land conflict issues, but it hasn’t done anything. The State Security Minister invited the social movements to some meetings at military police headquarters to talk about evictions, but this didn’t solve anything, it was just so they could show they were speaking to us. And the violence continues. On the 16th while I was working to defend the families during the entire violent police action, the 18th Civil Court of São Paulo decided to evict 8,000 people in Vila Maria, which is another community that we support. Based on the way they have been managing evictions, we are very worried about what is going to happen.  The people who were evicted on the 16th moved to another vacant building that was being occupied and when they got there they found out another judge had just issued an order for eviction there too. So, there you have it. There aren’t many options for these families at the moment except to fight, to resist and to confront the government.

I should mention that the situation in São Paulo is serious but there are other cases around the country, like the planned eviction of 12,000 people in Isidoro favela in Belo Horizonte, 20 planned forced mass evictions in Porto Alegre and violent evictions happening in many other cities across Brazil. And this shows that this is a national problem. It shows how serious the confrontations are between the squatters’ movements with the real estate industry which associates itself with the judiciary, the police and the state. I don’t want to leave any actor out of this process here because we have asked everyone to get involved and help mediate these conflicts, but it has been a dialogue of the deaf and mute, because nobody is taking a position and getting involved in the issue and the situation is getting worse and worse. So we don’t know where this is going and when this cycle of violence against poor families and against the homeless will stop.

Brian Mier is a geographer and freelance journalist who lives in Brazil and works as a policy analyst at the Centro de Direitos Econômicos e Sociais.