“The 2016 Social Security Trustees Report is little changed from the 2015 Report. It shows a small decrease in the projected 75-year shortfall of 0.02 percentage points. Changes in the disability program, along with small changes in projections more than offset the increase of 0.6 percentage points due to shifting the projection period by a year. (The new projection adds 2090, a year with a large projected deficit, and loses 2015, a year with a surplus.) While reporters and politicians routinely focus on the projected shortfall, what will matter far more to the people covered by Social Security is the projected growth in real wages and their distribution. As has been pointed out, almost 40 percent of the projected shortfall in the program is attributable to the upward redistribution of income over the last four decades. This has pushed a larger share of wage income over the taxable maximum. For this reason, the finances of the program are directly affected by the distribution of income.

“More importantly, the growth in real wages will have an enormous impact on future living standards, since the vast majority of the working-age population receives the overwhelming majority of their income from their work. The extent to which projected gains in productivity are seen in wages and compensation will have much more impact on workers’ living standards than any plausible increase in the Social Security tax. The figure below shows the relative size of the tax increase the Trustees project would be needed to keep the program fully solvent over the next 75 years and the projected increase in the average real wage over the next three decades. 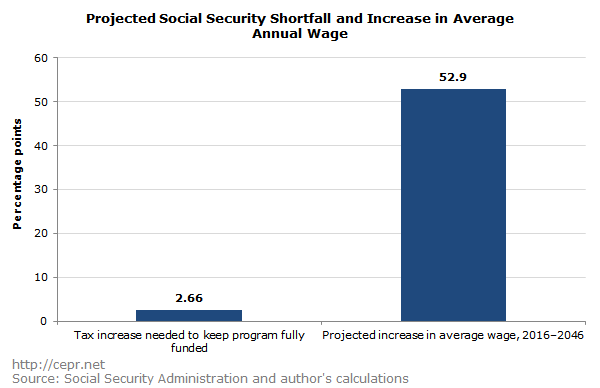 “As can be seen, the projected increase in the average real wage of 52.9 percent is almost twenty times as large as the 2.66 percentage point increase in the payroll tax. This means that workers have vastly more at stake in whether they will receive their share of wage growth over this period, than whether it is necessary to raise the Social Security tax rate at some point. The former will depend on factors like trade policy, patent and copyright policy, and the Federal Reserve Board’s decisions on interest rates. (Of course any shortfall in Social Security could be covered through other mechanisms than increases in the payroll tax.)

“This is the last Trustees report of the Obama administration. For this reason, it is worth comparing the changes with the last report of the Bush administration. The 2008 Trustees Report showed a considerably smaller projected shortfall for Social Security. It projected a shortfall of 1.70 percentage points for the years 2008–2082. This figure has increased to 2.66 percentage points in the 2016 report. Roughly half of this increase is attributable to the change in the projection period. Moving the period out eight years added approximately 0.48 percentage points to the projected shortfall. The other half of the increase in the gap was due to the Great Recession. This reduced employment and wage growth, leaving both far below the projections in the 2008 report. This is a clear warning as to the importance of the strength of the overall economy for the health of Social Security.

“This means that the longer term shortfall projected for these programs together is now considerably smaller than when President Obama took office. The reason for the decline in the projected Medicare shortfall is a slower projected rate of health care cost growth. This is undoubtedly attributable in part to changes implemented as a result of the Affordable Care Act (ACA). While the size of the impact of the ACA on health care cost growth can be debated, it is clear that the combined finances of these programs looks better in 2016 than when President Obama took office.”

Ten Years After Honduran Villagers Were Killed in a DEA-Led Operation, Survivors and Families Languish, and There’s Been No Accountability