As America grows to be a more diverse society, in many ways, it has also become a far more unequal one. American inequality has fluidly adapted to prevailing federal, state, and local institutions and continues to expose a country that has repeatedly fallen short of amending the systemic disparities among race, class, gender and ethnicity. These disparities have become increasingly more pronounced in the US economy, creating even more inequality and insecurity.

In an economy in which the wealthy benefit and the rest of the country are dramatically left behind, many lower- and middle-class workers struggle to achieve upward economic mobility due in part to flat wages and the rising costs of housing, healthcare, and the overall cost of living. These obstacles limit access to higher incomes and in turn, wealth. As high earners save much more of their income than low-wage workers, they are able to acquire more assets and build wealth — a path that is especially obstructed for black Americans who often earn much less. This is compounded by the fact that for decades, people of color have lagged behind white people by almost every economic indicator due largely to the legacy of slavery, the manifestation of structural racism, and the institutionalized exclusion of people of color from social and economic progress. Black people often face gross, structural barriers in attaining economic prosperity and wealth by way of an ascendant American social structure that has historically worked against them. American society routinely benefits white Americans while also generating adverse outcomes for people of color in the aggregate.

The accumulation and transfer of wealth is an essential element in maintaining economic stability; it provides economic security from risks, and supports investments that increase access to future opportunities. Due to the systemic unequal access to wealth-building resources in education and homeownership as well as deeply rooted discriminatory public policies against black people, a racial wealth divide has developed between black and white households, and continues to widen. Figure 1 illustrates how the inequitable history of black achievement in the US has manifested into the present racial wealth divide. 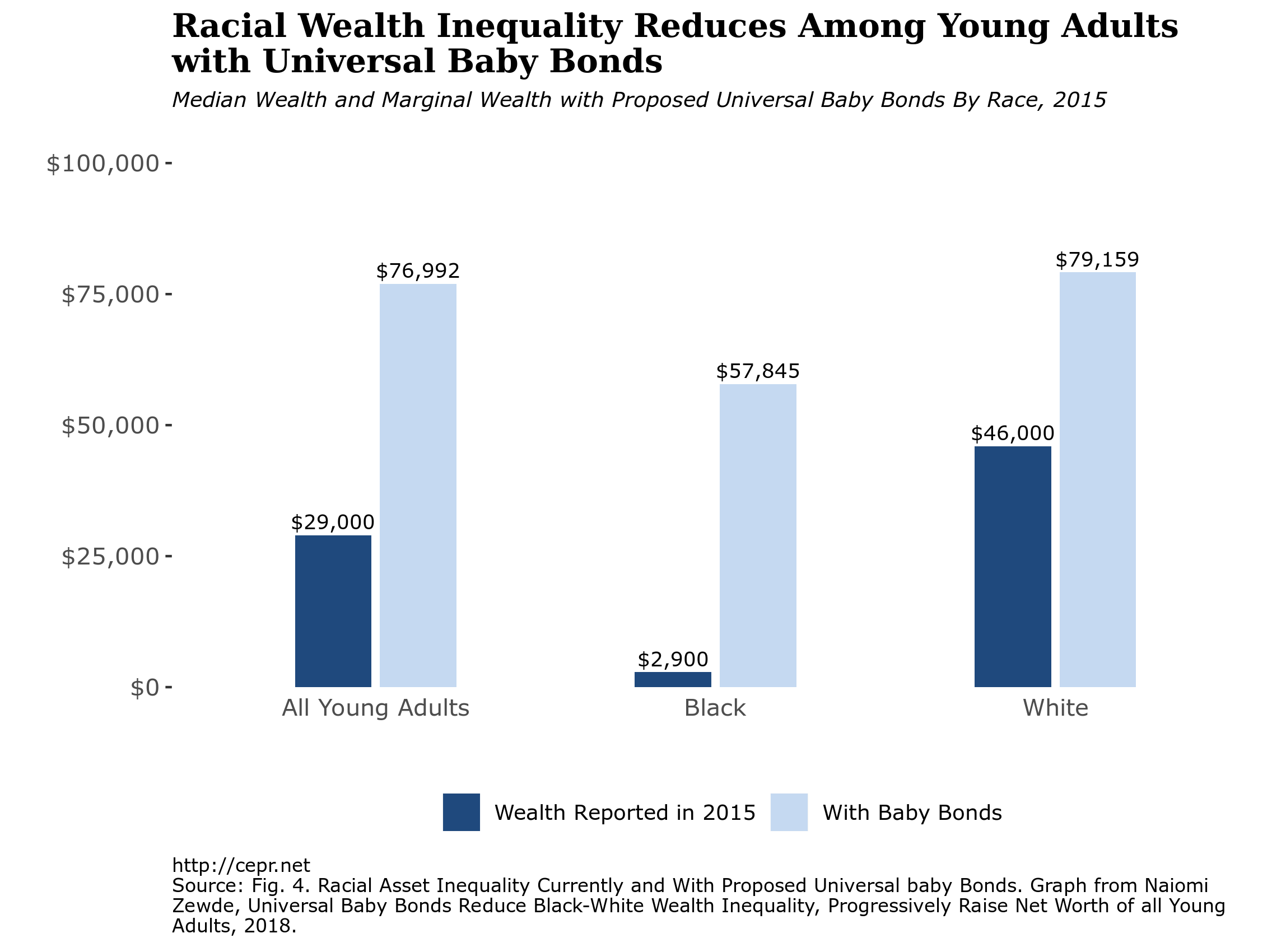 Additionally, Americans in general are increasingly likely to have zero or negative wealth, a situation that disproportionately affects black Americans. Those with little to no wealth are far more vulnerable in the event of economic crises like recessions or extended periods of unemployment. Black families are approximately 20 times more likely to have zero or negative wealth than they are to have a million dollars or more in assets. If the trajectory of the racial wealth gap of the past three decades continues to expand, the median black family will reach zero wealth by the end of the century.

Despite the clamoring boasts from Donald Trump wrongly declaring responsibility for how well black people are doing in the current economy due to low unemployment rates, recent studies have drawn dismal conclusions regarding black wealth. The Institute for Policy Studies found that between 1983 and 2016, the median black household saw their wealth plunge by more than half after adjusting for inflation. By comparison, the median white household saw a 33 percent increase. However, over that same period, the number of households with wealth of $10 million or more skyrocketed by a staggering 856 percent, creating even more distance between the wealthy and the average household. Today, the Forbes 400 richest Americans own more wealth than all black households plus a quarter of Latinx households together.

As the racial wealth divide has grown, so has the urgency to bridge the gap. Over the years, researchers and policymakers have identified various ways to undo the detrimental legacies of past racism and overcome the devastation caused by sustained racial bias and discrimination in the U.S. economy.

Among the most widely discussed policy proposals for reducing the racial wealth divide are equitable homeownership policies, children’s direct cash investment programs, and progressive income and wealth taxes. These wealth-building strategies are designed to address systemic racism and create more equitable opportunities for people of color, which in turn can facilitate ways that people of color may maximize their skills and boost their economic contributions to, and rewards from, an economy that has largely held them back.

Homeownership is often regarded as the single, most fundamental building block in accumulating wealth and the cornerstone of achieving the American Dream. However, this dream was unachievable for most black families, and still is today. Grossly discriminatory housing policies — from the Federal Housing Authority refusing to underwrite housing loans, to aggressive redlining practices and the subprime-mortgage loan crisis — were instrumental in the low homeownership rates among people of color historically. In addition to black people having low homeownership rates, many black families struggled to gift land to their children as an inheritance, thus hindering those children from building wealth as they grew older. This recurring cycle largely led to the widening of the racial wealth gap and the falling homeownership rates among black families. As Demos reported, if homeownership rates were the same for all races, the wealth gap between black and white families would be reduced by 31 percent.

Federal and state policies should provide resources to help low-income families advance toward purchasing a home, which in turn would help families accrue wealth and establish stable communities around the country. In September of 2018, 2020 presidential candidate Senator Elizabeth Warren introduced the American Housing and Economic Mobility Act which ensures universal access to equitable and affordable housing. It uses revenues from higher estate taxes to fund an expansion of federally subsidized housing. The law would also provide grants for first-time home buyers in low-income neighborhoods that have broadly been subject to discriminatory redlining methods. A bold and progressive housing policy initiative like Warren’s, in conjunction with stricter anti-discrimination laws, could have a tremendous effect on reversing economic inequality, thereby reducing the racial wealth gap.

Warren’s law has garnered praise as it acknowledges the intersectionality of race and class, both which need to be addressed in combating the racial wealth gap. The Atlantic has even called the law the most far-reaching assault on housing segregation since the 1968 Fair Housing Act.

As noted above, those born into families with little or no wealth are often trapped on the low end of the wealth distribution for the rest of their lives. This preserves the legacy of the racial wealth divide between white families and families of color. An ideal policy tool to reduce the racial wealth gap is financial investment in children born into low-income households.

An increasingly popular proposal to close the racial wealth divide does just that. Recently highlighted by 2020 candidate Corey Booker, the baby bonds program — which formally goes by the name the American Opportunity Accounts Act — would serve as a children’s savings account for newborns. It will be worth upwards of tens of thousands of dollars by the time the account holder turns 18 years old. Under the program, at the time of birth, the child would receive $1000. Every year thereafter, the account holder could receive up to an additional $2,000 based on the child’s family income. At age 18, the child would be able to access the account strictly for uses like education, retirement, and homeownership.

Many economists have argued in favor of the benefits of baby bonds for low-income children, noting that it is a race-neutral way to close the racial wealth divide. Dr. Naomi Zewde, a postdoctoral research scientist at the Center on Poverty and Social Policy, analyzed the impact of a baby bonds policy on racial groups, which can be seen below in Figure 2. 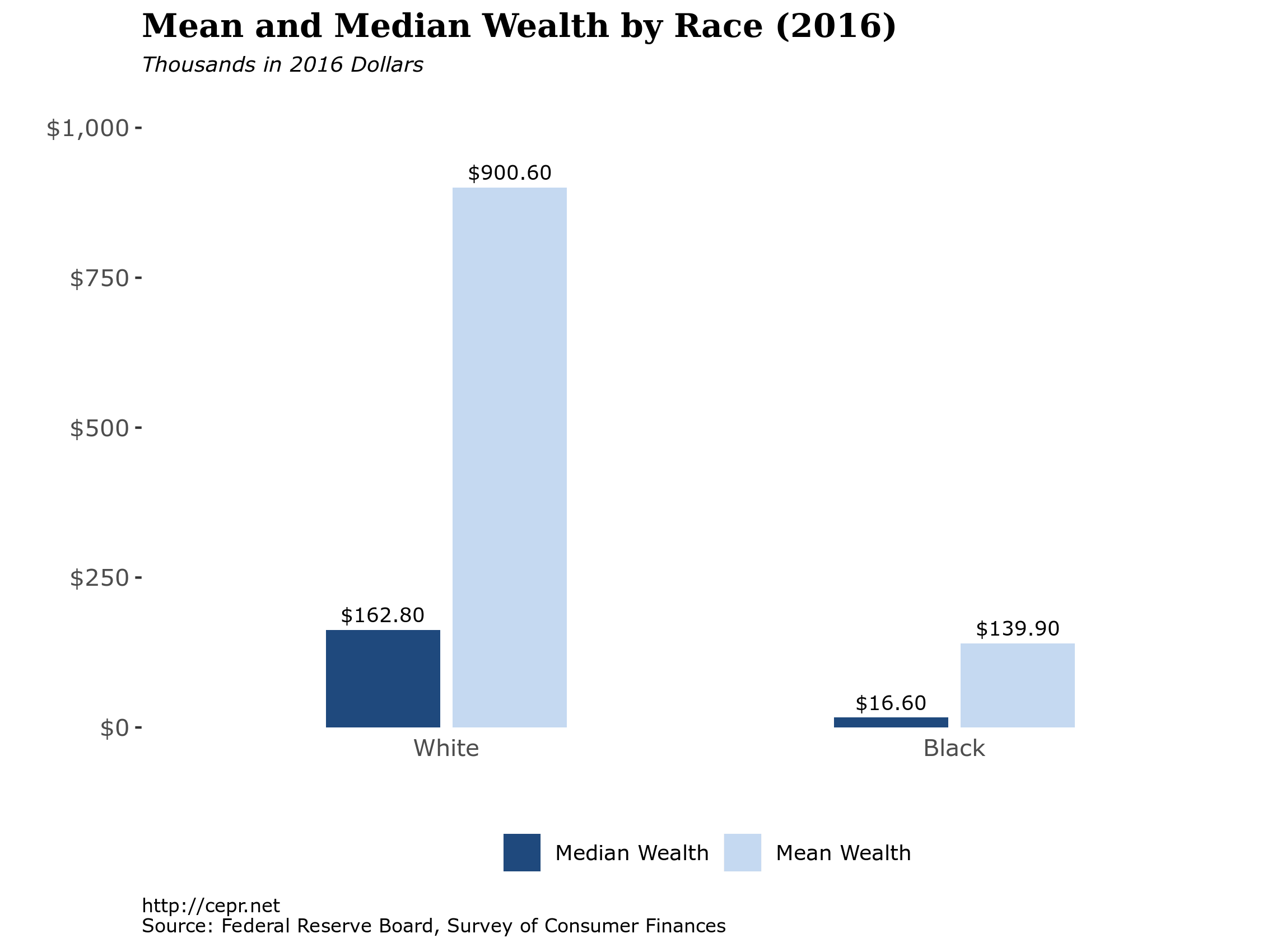 Increase Taxes on the Wealthy

Taxing top income-earning households is essential to addressing income inequality. With the passage of disproportionate tax cuts on the wealthy and other public policies that concentrate an increasing share of national income in the hands of the top one percent of households, black people not only struggle to earn a just living in an unfair economy, but also lack the ability to save and build wealth. The nearly $275 billion in tax cuts from the Tax and Jobs Act enacted by Congress in 2017, saw 72.0 percent go to the top 20 percent of households and 80.0 percent going to white households, which further increases the racial wealth divide. A likely result is that according to a recent poll, 76.0 percent of registered voters want the wealthiest Americans to pay more in taxes.

One of the most vocal — and undoubtedly the most popular — leaders in support of progressive tax reform on income is Rep. Alexandria Ocasio-Cortez. Ocasio-Cortez has recommended creating a top marginal tax rate of 70 percent on income over $10 million to help fund a popular proposal in The Green New Deal — a policy proposal set to achieve net-zero greenhouse gas emissions and to provide equitable access to jobs and fair wages.

Regarding wealth, Senator Elizabeth Warren and Senator Bernie Sanders have both introduced proposals on raising taxes for the wealthy. Under Warren’s tax plan, the tax rate on wealth would be 2.0 percent, but it would only apply to American households worth at least $50 million dollars to $1 billion dollars. American households worth more than $1 billion would have a 3.0 percent tax. Under Sanders’ “For the 99.8%” proposal, estates between $3.5 million and $10 million would be taxed at 45.0 percent. Subsequently, the tax rate would increase to 50.0 percent for assets of $10 million to $50 million and to 55.0 percent for assets between $50 million and $1 billion. Any assets above this threshold will be taxed at a rate of 77.0 percent.

Although these three policy proposals differ in either taxing wealth or income, theses tax proposals stand at the forefront of providing the basis for meaningful tax reform with a goal of reducing rising inequality. Each plan could also potentially raise trillions of dollars for the government. This tax revenue can be redistributed into investments in programs that boost the wealth of low- and middle-income workers and people of color such as student loan debt relief, federal housing affordability, and poverty alleviation.

Sadly, these policy proposals alone won’t erase the racial wealth divide or heal the lasting oppression that black people face in America. Policy proposals such as raising the minimum wage or a direct federal job creation program could considerably benefit many low-income workers as well as people of color. Many have even argued in support of a targeted reparation program that could also help people of color acquire more wealth and reduce the gap. However, these proposals are only small steps in tearing down the barriers used to hinder millions of people of color from achieving wealth and prosperity in the United States.

The Impact of the Pandemic on Superstar Cities

Waiting for a Vaccine and the Collaborative Research Alternative