Rents and Minimum Wage Income in the U.S.’s Largest Cities

Guidelines from the Department of Housing and Urban Development recommend that households spend no more than 30 percent of their income on housing. The reality, however, is that over half of U. S. households spend more than that. A burden which the department notes can cause households to struggle to afford “necessities such as food, clothing, transportation and medical care”. 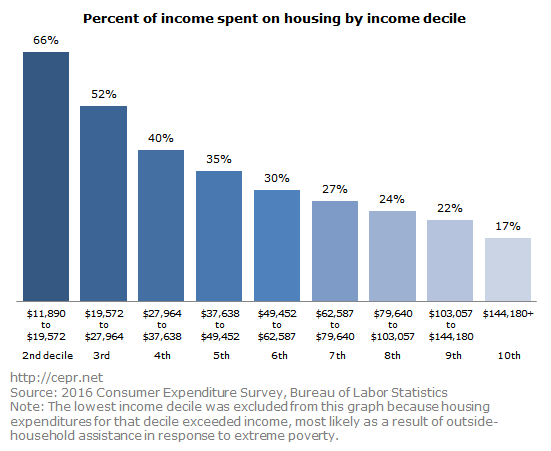 CEPR compared Fair Market Rent for a one-bedroom appartment in some of the U.S.’s largest metropolitan areas to monthly income based on each city’s minimum wage to get a more accurate picture of housing costs for the majority of the population.

Unsurprisingly, San Francisco, CA wins as the “most unaffordable” city to live in based on this data analysis. One month of full-time minimum wage work at $13 an hour would net the worker $2,080 and their fair market rent would be $2,411, or 116 percent of their monthly income. This disparity puts San Francisco a full 30 percentage points above second-place contender, Philadelphia. At the opposite end of the spectrum, full-time minimum wage workers in Dallas, TX earn $1,160 at $7.25 per hour and pay 41 percent of it, $679, in fair market rent. This is the lowest percentage of any of the cities analyzed, although it is still well above the 30 percent federal guideline. 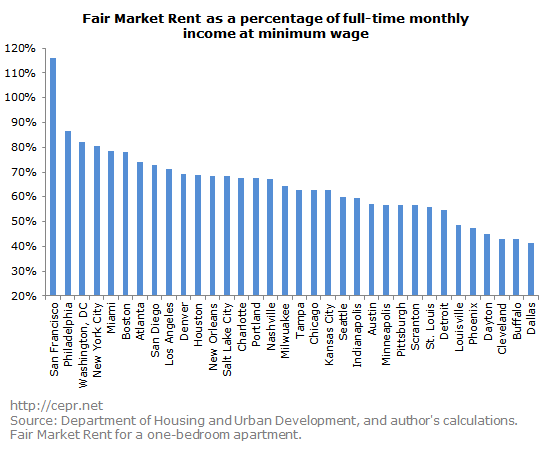 Financing Drug Development: What the Pandemic Has Taught Us

A Day One Agenda for Private Equity

On Climate Policy, Biden’s Advisers Reveal More Than His Proposals Do