Retirement Incomes are Falling for Many Americans, Despite What AEI Wants You to Think

In a new paper from the American Enterprise Institute, Andrew Biggs and Sylvester Schieber argue that workers’ retirements are more secure financially than some suggest. In part, they point to the ratio of household assets to wage earnings for those with heads aged 45 to 54. While their criticisms may have some validity, there are some significant omissions that cut the other way. On balance, it is likely that most households will rely more heavily on Social Security to support their retirements than in prior years.

According to the Survey of Consumer Finances, on average household wealth for the 45 to 54 age group fell from 5.8 years of wages in 2007 to 4.7 in 2013.1 Household wealth here—consistent with Biggs and Schieber—includes the value of a home and any other real estate, plus financial wealth. Mortgages and other debt are subtracted to get this number, as seen in Figure 1. 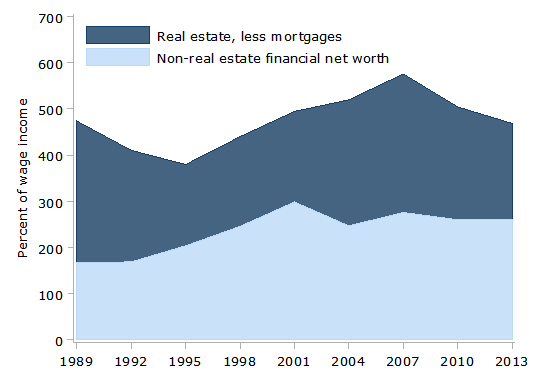 At 5 percent interest, this wealth could replace only 23.4 percent of current wage income compared to 28.8 percent in 2007.2

Combined with the steady decline in non-Social Security defined-benefit (DB) pensions—only 26 percent of households had any such pension compared to 55 percent in 1989—retirement income is much lower than before. Worse, if increased life expectancy leads to longer retirements then savings rates must rise over time in order to generate the same retirement income. Thus, even constant wealth to income ratios across generations would suggest declining annual retirement incomes.

Even so, averages are misleading as inequality increases. Thus, we augment the analysis of Biggs and Schieber by considering only the middle 20 percent of wage earners. In 2013, this meant wages between 39 and 65 thousand dollars. In order to factor in DB pensions, we have imputed extra wealth sufficient to generate additional retirement income of 20 percent of current wages at 5 percent interest.3 That is, we impute four additional wage-years of wealth to a household with a DB pension.

In 1989 middle-income households had wealth including DB pensions equal to 5.9 wage-years. By 2013, this was down to 4.1. Unfortunately, households still need a place to live. Middle-income homeowners in 2013 had primary residences valued at 3.4 years of wages, meaning that the wealth of all middle-income households is not much more than enough to pay for their homes, leaving them little income outside their Social Security benefits to meet their other retirement expenses, as seen in Figure 2. 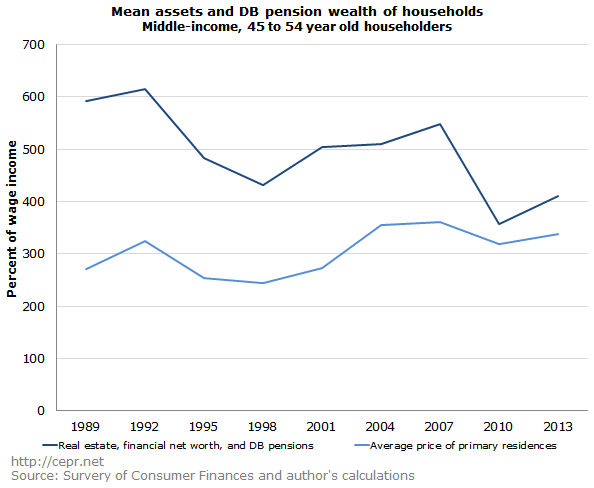 1. Thanks to Andrew Biggs for helping to replicate these numbers. ?

2. This also assumes zero closing costs in the sale of any real estate and no fee for annuitizing household wealth. ?

3. A typical DB pension likely replaces much more than 20 percent of income, but many such pensioners are not eligible for full—if any—Social Security retirement benefits. Note that we are interested in the personal wealth equivalent to the DB and not the actual assets of a pension plan. Compared to households, a properly managed pension plan is able to assume greater risk and receive higher returns on less wealth.?