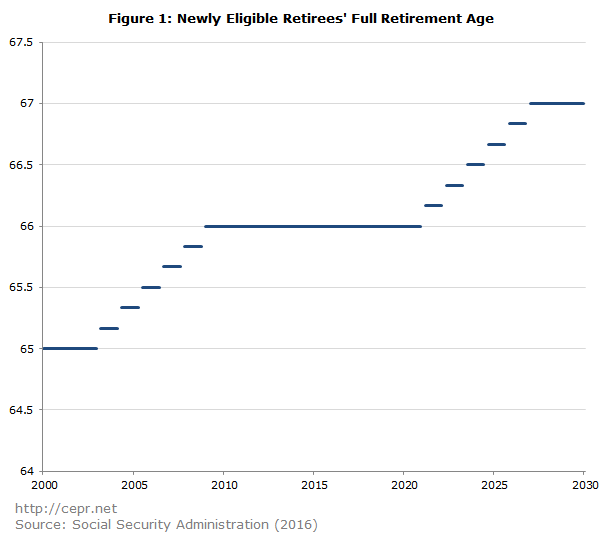 However, since Congress decided to raise the SSFRA in 1983, gains in life expectancy have not been shared evenly across the wage distribution. Between 1987 and 2006, average longevity for 65-year-old men in the bottom half of the wage distribution increased just 9.6 months; for men in the top half of the wage distribution, longevity increased by four years (48 months). (Data are not available for 1983–1986, so the 1987 figures are the first data points from after the 1983 reforms.) During this same time, the SSFRA rose from 65 years to 65 years and 8 months. Figure 2 shows the number of years that workers could expect to receive full retirement benefits in 1987 and 2006: 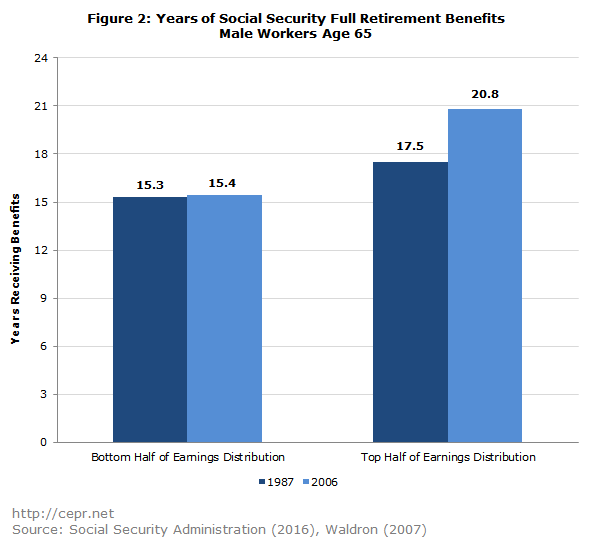 As shown in Figure 3 below, this meant that male workers in the bottom half of the wage distribution actually saw essentially no increase in the number of years they could expect to receive full benefits: 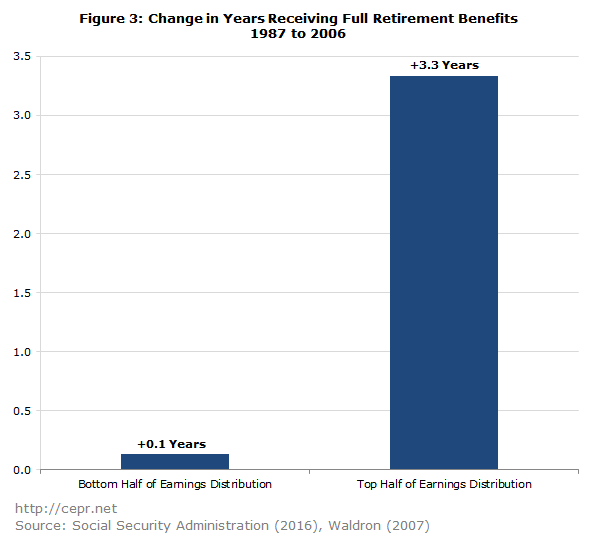 But this isn’t the whole story. Unless changes are made to current law, the SSFRA will rise to 67 by the year 2027. Over the 19-year period ending in 2006, life expectancy increased by 0.8 years for 65-year-old men in the bottom half of the wage distribution and by 4.0 years for men in the top half. If life expectancy goes up at the same rate between 2006 and 2027, low-wage workers will see an even greater loss in benefits, while high-wage workers will see an even greater increase: 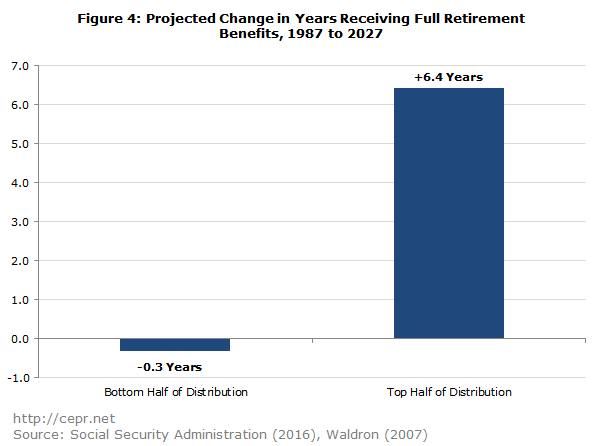 If the SSFRA were instead raised to 70, low-wage male workers would see their full retirement benefits decline by 3.4 years between 1987 and 2027. While everyone would take a hit, overall the poor would be hurt the most. The top 1 percent of the wealth distribution would see the smallest relative decline in net wealth (Rosnick and Baker 2012 pg. 9–11).

Those in the top half of the wage distribution have seen a much greater increase in life expectancy than those in the bottom half. However, this doesn’t tell us anything about changes in life expectancy within each half of the wage distribution. For example, we don’t know if people in the bottom fifth of the income or wage distribution have experienced longevity gains equal to people right near the middle. Unfortunately, we don’t have this sort of fine-grained data for 65-year-olds, but we do have a good proxy: the National Academies Press recently published a study looking at changes in life expectancy between 1980 and 2010 for 50-year-olds. It found that while life expectancy had increased substantially for the top 20 percent of income earners, it had fallen for the bottom 20 percent. This is shown in Figure 5 below. (Due to a small sample size, the estimates for women are to be taken with a grain of salt. Having said that, even if the precise findings for women are somewhat off, the general trend of differential increases along the income distribution is clear.) 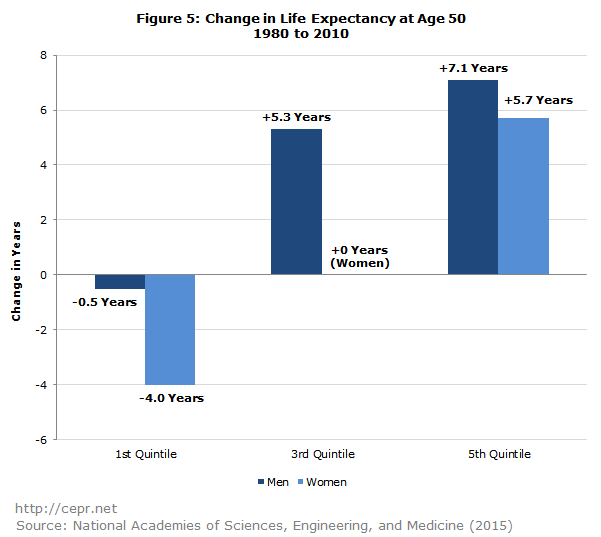 National Academies of Sciences, Engineering, and Medicine. 2015. “The Growing Gap in Life Expectancy by Income: Implications for Federal Programs and Policy Responses.” Washington, DC: The National Academies Press, Committee on the Long-Run Macroeconomic Effects of the Aging U.S. Population-Phase II. Committee on Population, Division of Behavioral and Social Sciences and Education. Board on Mathematical Sciences and Their Applications, Division on Engineering and Physical Sciences.