Larry Summers in his review of Capital in the Twenty-First Century gives Thomas Piketty high marks for demonstrating “absolutely conclusively” that those at the very top – the top 1 percent, top .1 percent, and top.01 percent – have claimed an increasing share of income and wealth since 1980. Indeed, as Summers notes, the disparity between the top 0.1 percent and the rest of the top 10 percent has grown wider than the gap between the income of the top 10 percent and that of average income earners. As Summers acknowledges, this cannot be explained by a lack of worker skills.

What, then, does explain this growing income inequality? Summers begins by positing that much of what appears to be capital income going to those at the top is actually labor income. “[F]or example,” Summers writes, “some large part of Bill Gates’s reported capital income is really best thought of as a return to his entrepreneurial labor.” So, in Summers’ view, it’s really a question of understanding the large increase in labor income of the top 1 percent relative to the rest of us.  Self-dealing by executives of publicly traded companies, whose owners (the company’s shareholders) are too dispersed to effectively monitor them and whose directors are in bed with top management, is part of the story Summers tells. But this can’t be the whole story – productivity, he argues, must account for an important part of the income earned by executives. Summers knows this because the highest paid executives are, he claims, the ones chosen by “a single hard-nosed owner [who] is in control.” Summers bases his argument that executive pay reflects the productivity of CEOS on his assertions that the highest paid managers are not the top brass in publicly traded corporations but the “executives chosen by private equity firms to run the companies they control.” But private equity is notoriously private, and while CEOs of portfolio companies are highly paid, there are no data to show whether they earn more than other CEOs.  Moreover, as Summers observes, “the extraordinary levels of compensation in the financial sector” are a major contributor to the sharp rise in incomes at the top. And while he concedes that “over-financialization of the economy” may be a cause for worry, he is nevertheless certain that “much of the income earned in finance does reflect some form of pay for performance; investment managers are, for example, compensated with a share of the returns they generate.”

This is an incredibly naïve, not to say disingenuous, view of how investment fund managers make their money – especially coming from Larry Summers who, after all, has held lucrative positions with Citigroup and the hedge fund D.E. Shaw, and has served on the boards of two start-up financial companies. Summers has earned more than $7 million working part-time on Wall Street since returning to his full-time faculty position at Harvard in 2011. Perhaps this infographic below of the private equity business model from our new book, Private Equity at Work: When Wall Street Manages Main Street, can help Summers understand how private equity works.

The private equity business model is designed to funnel the lion’s share of income to the partners in PE firms who, as it happens, are the managers of the PE funds the firm sponsors.  CEOs installed to run the operating companies acquired by private equity know which side their bread is buttered on. Their job is to deliver results for the PE owners regardless of the effects – good or bad – on the productivity and competitiveness of the companies they were hired to manage. And they are richly rewarded for single mindedly serving the interests of the company’s PE owners. 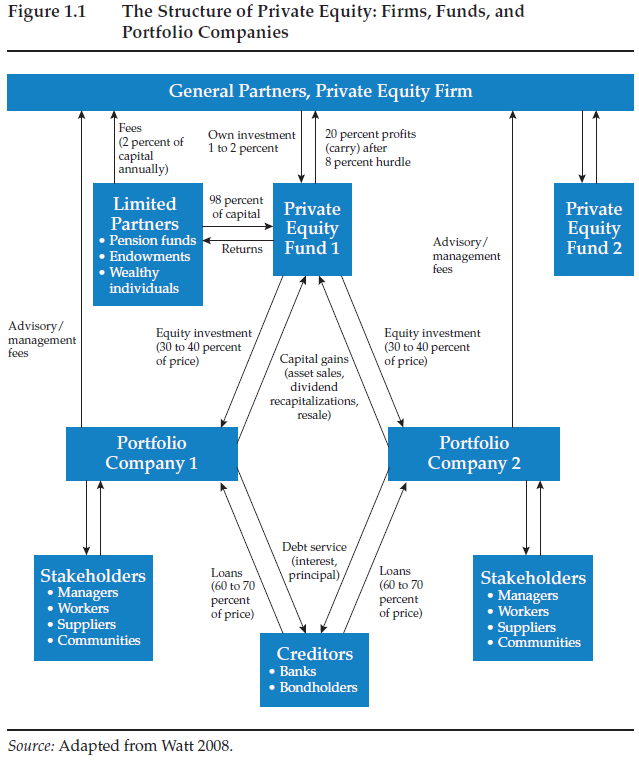 As we show in Figure 1.1 of Private Equity at Work, which we adapted from Andrew Watt, the PE partners, who make all the decisions, contribute $1 to $2 for every $100 dollars that pension funds and other investors contribute to the private equity fund. The fund typically puts up 30 percent of the purchase price of a company it acquires, financing the other 70 percent with debt – debt that the acquired company, and not the private equity owners, must repay or face bankruptcy. Thus the PE partners have very little of their own money at risk – typically less than 1 percent of the purchase price of the companies their funds acquire. Yet these private equity managers typically receive 20 percent of the gain when the company is subsequently sold. This is a classic case of ‘moral hazard.’ The people making the decisions have very little to lose when deals go sour but much to gain if they succeed. The incentive to engage in risky behavior in this heads-I-win, tails-someone-else –loses environment is strong: and PE fund managers respond by loading acquired companies with excessive debt. It is this excessive debt and, contra Summers, not managerial performance in the generally understood sense of contributing to the growth of the economy as, say, Bill Gates has done, that is the source of the extraordinarily high incomes earned by investment managers. Moreover, the millions of dollars in management fees they collect from limited partners further amplify their earnings regardless of how the PE fund performs.

Meanwhile, at the direction of the hard-nosed PE owners who are in control, private equity’s hand-picked company executives have agreed to issue junk bonds and load their companies with even more debt in order to pay dividends to the companies’ owners. These so-called dividend recapitalizations repay private equity partners for most or all of their initial equity investments even before the companies are sold. Loyal to the PE firm that hired them, these executives sign contracts to pay excessive fees to the PE firms for dubious monitoring and advisory services, as recent SEC investigations have revealed. PE firms continue to collect these fees even as their portfolio companies head toward bankruptcy. And they collect the fees even after the company has been sold, for services they will never provide.

Leverage and a business model that funnels gains up from the operating companies at the bottom to the private equity firms at the top that are expert at extracting value are behind the high incomes of the private equity titans. It is leverage, not the greater scope that technology and globalization offer superstars – presumably including these high paid investment managers – that explains the latter’s membership in the 1 percent.

One of the lessons of the financial crisis is that leverage is dangerous to the stability of the financial system, especially when its use is not transparent and its effects are only poorly understood. Summers argues that there is more that can be done to raise middle class incomes and limit wealth accumulation than Piketty recognizes, and we agree. Limiting the use of debt would be a good place to start.

How to Decimate the Corporate Tax-Avoidance Industry