The Bolivian Transportation Sector, Regional Integration and the Environment

Bolivia will most likely join Brazil and Argentina (Bolivia’s largest trading partners) by becoming the sixth member of the MERCOSUR group. Since 2006, Bolivian trade with MERCOSUR has grown by 17 percent. A recent study published by Desarrollo de Negocios Internacionales found that over the last 10 years Bolivia has experienced the second highest export growth rate in South America. This is remarkable considering that on average landlocked developing countries (LLDC) trade 30 percent less [PDF] than coastal countries [1]. As a result, for most landlocked countries transportation infrastructure plays a crucial part in facilitating intraregional trade. Since 2005, industrialization has become a key aspect of Bolivian President Evo Morales’ economic policy, particularly in the area of transportation, which in 2013, accounted for 30 percent of total [PDF] public investment [2]. The chart below shows levels of public investment in transportation as a percentage of total GDP since 2005: 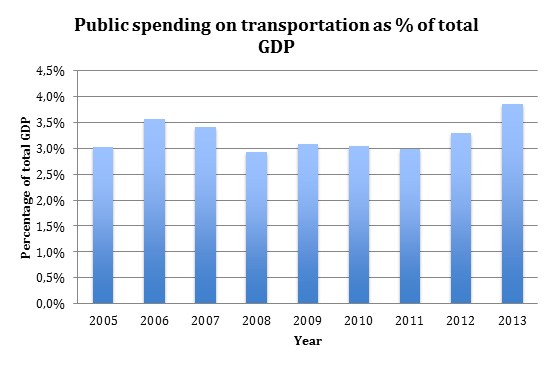 According to United Nations Conference on Trade and Development (UNCTAD), on average LLDCs spend almost two times more of their export earnings on transportation and insurance expenses than developing countries and three times more than developed countries. Typically, LLDCs have higher transport costs in foreign trade due to lack of access to seaports and poor transportation infrastructure. According to the United Nations Economic Commission for Latin America and the Caribbean (ECLAC), Bolivia was rated as having the second worst transportation infrastructure in the entire continent. Only 7.1 percent [PDF] of Bolivian roadways are paved (the lowest in all of South America).

However, since 2005, the Bolivian government has constructed 2,407 miles of paved highways, more than the total [PDF] constructed during the entire period from 1948-2000 [3]. In 2014, the Bolivian government seeks to construct an additional 486.7 mi [PDF] in roadways and is projected to invest an additional $244 million dollars [PDF] in the transportation sector. The creation of new roads has played a major role in facilitating export growth. (It is worth noting that heavy state investment in transportation is not unique to Bolivia. In fact, transportation has become an economic priority for many countries throughout the region in order to improve regional integration. In 2011, 80 percent of transportation infrastructure in South America was financed by the public sector.)

However, it is worth pointing out that the Bolivian government has received substantial criticism from some sectors of Bolivian society who feel that the creation of new roads are invasive and pose a threat to fragile ecosystems.

Bolivia was ranked [PDF] by Germanwatch number six of countries most-affected by natural disasters due to climate change in 2007. Each year the Bolivian government spends millions of dollars on road repairs in response to natural disasters. Earlier this year heavy rains rocked the country, resulting in 59 tragic deaths and causing about US$ 38 million in damage to road infrastructure. Environmental disasters are yet another factor that contribute to high levels of public spending on transportation.

Despite some public criticism, transportation infrastructure is seen by the Bolivian government as a necessary evil in order to facilitate trade, reduce inequality, create jobs (the transportation sector created 21,115 new jobs in 2012) and increase economic growth (in 2013 Bolivia recorded a 6.5 percent GDP growth rate. Its highest [PDF] in 38 years.) As Bolivia becomes the newest member to join MERCOSUR it will undoubtedly continue to increase trade relations with other member countries and this will most likely lead to the further expansion of transportation infrastructure.

2 Sectors that receive the highest levels of public investment are ranked as follows: transportation, hydrocarbons, housing and education.

3 Since 2006, the government has also built an additional 42 bridges along with four international and two domestic airports. The transportation sector also acted as important source of job creation and in 2012 the industry created 21,115 new jobs.