The Cost of Capping Medicare Out-of-Pocket Spending, a Good First Step Towards Medicare for All

Amid threats to the huge gains in insurance coverage under the ACA — most recently, the failed Graham-Cassidy Senate bill — a growing number of people, politicians, and policymakers on the left have begun to push for even bolder, more expansive national health care programs. In the past two months alone, Senator Sanders has pushed forward with his Medicare for All plan, while in the House, Representative Schatz has introduced a Medicaid for All bill and Representative Conyers has moved forward with his single-payer proposal. Medicare for All has also come close to passage at the state level in California and New York.

Proposals like these are vital steps in moving the public debate to a point where universal coverage is seen as politically viable. Bold initiatives are necessary to build public support for broader coverage and wider acceptance of health care paid for by the government due to resistance from the health care industry and the stigma sometimes associated with government-provided health care. For example, the ACA, while far less ambitious than single-payer programs, not only led to wider acceptance and support for Medicaid it also won over a number of physicians and health care professionals once opposed to the Obama initiative.

However, there are many details that need to be addressed before any of these more ambitious plans can be put in place. While other wealthy nations have single-payer-type systems, these programs were all implemented in countries with much lower health care spending than is currently the case in the U.S. The enormity of the task of moving toward a single-payer system is a strong argument for getting there incrementally.

One step could be lowering the age of eligibility to 55 and/or including minors, with the option for others to buy into the system along the lines recently proposed by Senator Bernie Sanders and 16 co-sponsors. However, if we were to go this route, there would need to be changes to the current Medicare program, most importantly, the out-of-pocket cost of Medicare for individuals.

Currently, Medicare A (hospital insurance) and B (medical insurance), together known as Original Medicare, are the source of most health care coverage for people over the age of 65. These parts cover “medically necessary care” in hospitals, home health, skilled nursing facilities as well as doctors’ services preventive care and outpatient services, among others. This differs from part D which covers prescription drugs and Part C which covers supplemental insurance (also known as “Medicare Advantage”). Part A is free if a beneficiary has paid Social Security taxes for 10 years. Beneficiaries have to pay a premium for Part B but it can only be used with Medicare-enrolled providers. Part D is optional for most and is only available from private insurers. Part C is private supplemental insurance offered as an alternative to the Original Medicare.

While Medicare does help make health care more affordable for millions of Americans, many still face large amounts of out-of-pocket expenses. To transition to an expanded Medicare, it is necessary to cap this spending to make it more affordable for a larger pool of people, including the costliest to insure.  This post provides some rough estimates of the number of people in the current program who would be affected by caps put at varying levels and the cost to the government. These costs would obviously increase if Medicare were expanded. Also, a cap on out-of-pocket expenses in the core Medicare program would inevitably lead more people to switch away from Medicare Advantage and to drop other types of insurance, both of which would add to the expense.

Drawing upon data from the Centers for Medicare and & Medicaid Services, the Medicare Payment Advisory Commission (MedPac), and the Kaiser Family Foundation, we can make some estimates. Medicare spending is highly concentrated among a relatively small number of beneficiaries. In an analysis of 2012 data, MedPac found:

Using total Medicare per capita spending and total beneficiaries for the same year, we can generate rough estimates of per person costs at different points in the distribution of spending. This can give us a sense of what we would spend if out of pocket expenses were capped. According to MedPac, Medicare covers on average 62 percent of total spending for the people in the traditional fee for service system. The remaining 38 percent is split between private insurers, other government programs (most importantly Medicaid) and out of pocket spending by patients. The question is how much would it cost to put limits on the out-of-pocket spending? 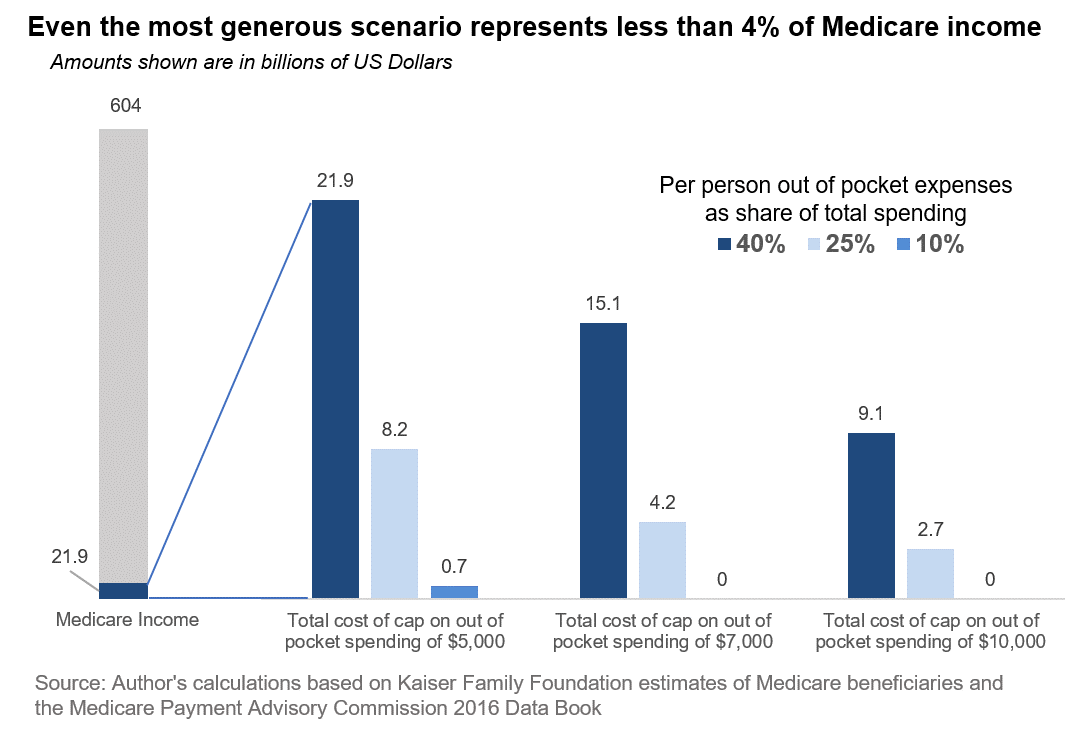 As noted, the expense to Medicare for these caps will rise as behavior adjusts. However, in some cases, this will simply be a shifting of pockets for the government. For example, at present, many beneficiaries with high expenses are forced to go Medicaid since they have no means to pay themselves. If there was a cap for these expenses, then Medicare would instead bear the burden. That would imply little net change in expenses for the government as a whole. It would mean that people would not have to spend down all their assets (or pass them on to their children) as a way to get the government to pay their bills. Most seniors would likely view this switch as a big gain from the standpoint of their financial security.

Once a system of caps was in place, in addition to being better for the population already served by Medicare, it would be a more realistic alternative to private insurance programs. This would make it more feasible to offer it as a buy-in option for younger people and to extend direct coverage to people in younger age cohorts.

[1] Since average payments have been assigned to each grouping the numbers should be viewed as giving general approximations. There are obviously substantial differences in spending among the most costly 1 percent of beneficiaries or the next costly 4 percent.

PREVIEW: What to Look for in the March Consumer Price Index

PREVIEW: What to Look for in the March Jobs Report