The Organization of American States Has Deceived the Public, Terribly, on the Bolivian Election

What is the difference between an outright lie — stating something as a fact while knowing that it is false — and a deliberate material representation that accomplishes the same end? Here is an example that really pushes the boundary between the two, to the point where the distinction practically vanishes. And the consequences are quite serious; this misrepresentation (or lie) has already played a major role in a military coup in Bolivia last Sunday. This military coup overthrew the government of President Evo Morales before his current term was finished — a term to which nobody disputes that he was democratically elected in 2014. More violent repression and even a civil war could follow.

The Organization of American States (OAS) sent an Electoral Observation Mission to Bolivia, entrusted with monitoring the October 20 national election there. The day after the election, before all the votes were even counted, the mission put out a press release announcing its “deep concern and surprise at the drastic and hard-to-explain change in the trend of the preliminary results…”

Here is what the OAS was referring to: there is an unofficial “quick count” of the voting results that involves contractors who upload results at intervals, as the tally sheets are available. At 7:40 pm on election day, they had reported about 84 percent of the votes and then stopped reporting for 23 hours (more on that below). When they resumed reporting results at 95 percent of votes counted, Morales’s lead had increased from 7.9 percent before the interruption to just over 10 percent.

This margin was important because in order to win without a second-round runoff, a candidate needs either an absolute majority, or at least 40 percent plus a 10 point margin over the second place finisher. This margin — which grew to 10.6 percent when all the votes were counted in the official count — reelected Morales without a second round.

Now, if you had any experience with elections or maybe even arithmetic, what is the first thing you would want to know about the votes that came in after the interruption? You might ask, were people in those areas any different from people in the average precinct in the first 84 percent? And was the change in Morales’s margin sudden, or was it a gradual trend that continued as more vote tally sheets were reported? You might even want to ask these questions before expressing “deep concern and surprise” about what happened, especially in a politically very polarized situation that was already turning violent. 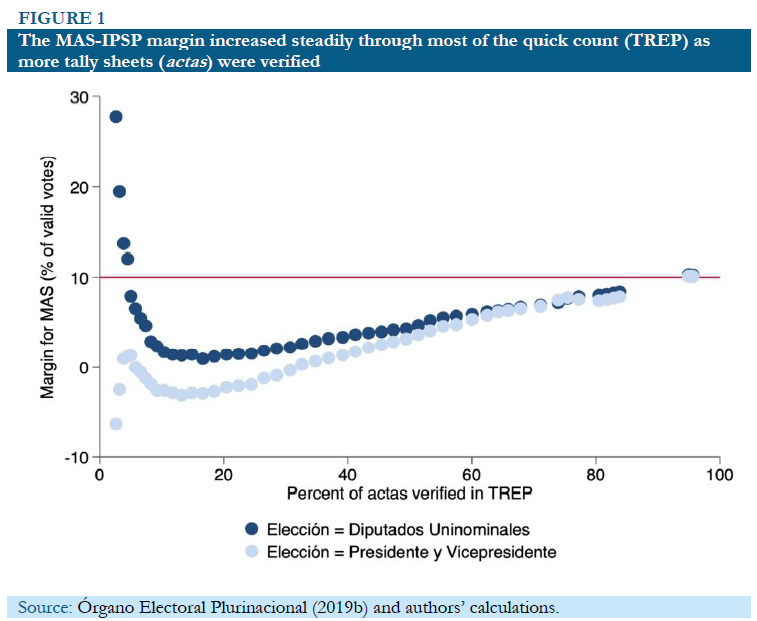 A look at that data shows that  the change in Morales’s lead was actually gradual and continuous, and started rising many hours before the break in reporting of the quick count. You can see that in a graph of the results. Why did it happen? The answer is simple and not that uncommon: the people in later-reporting areas were more pro-MAS (Morales’s party, the Movement Toward Socialism) than those in areas that reported earlier. Hence the gradual and continuous rise in Morales’s lead, in which the votes after the interruption put him over the top.

The OAS has published two press releases, one preliminary report, and one preliminary audit on the election. How many of these contained the disparagement of the election results implied by the “deep concern and surprise” quoted above? Three. How many contained anything about the difference between the percentage of MAS/Morales voters in areas with later returns versus earlier? Zero.

As it turns out, the interruption in the quick count was not a sign of foul play either. The quick count is separate from the official count, and has no legal status to determine the results. It’s never been intended or promised to be a complete count; in prior elections it did not even near 84 percent. It’s just a quick series of snapshots, done by contractors, to provide early results before the official count is done. It makes sense that the electoral authorities might not want two sets of voting results, which are inherently different, coming out at the same time in a violently polarized political situation.

For those who like numbers better than graphs: Morales’s margin in the first 84 percent of votes was 7.9 percent, as noted. If we look at the remaining 16 percent of precincts, and we ask, what is Morales’s pre-interruption margin in the areas where these later-reporting precincts were located? That margin is about 22 percent. Again, a simple explanation of how his margin increased as it did with later returns.

For a more powerful statistical analysis, we can project the remaining (and thus total) vote count on the basis of the first 84 percent reported. And — no surprise here — Morales’s projected final margin based on the first 84 percent of votes turns out to be slightly more than 10 percent.

It is difficult, almost impossible, to believe that this OAS mission, or those above them in the OAS Department of Electoral Cooperation and Observation, felt “deep concern and surprise” and yet were too incompetent to even look at this data. That is why I would say that they lied at least three times: in the first press release, the preliminary report, and the preliminary audit. And that is why I would regard with great skepticism the allegations presented in their preliminary audit, and further publications — unless these can be verified by independent investigators from publicly available data.

And the OAS isn’t all that independent at the moment, with the Trump administration actively promoting this military coup, and Washington having more right-wing allies in the OAS than they did just a few years ago. Not to mention that the US supplies 60 percent of its budget. But the OAS has horribly abused its mandate in election monitoring before, helping to reverse election results as the US and its allies wanted: most destructively, in 2000 in Haiti; and also in the same country in 2011.

More evidence: in the last three weeks, the OAS has refused to answer questions from journalists, on the record, about their statements or reports since the election. Maybe they are afraid that a curious reporter would ask questions like these: Is there a difference between the political preferences of people who live in later-reporting areas as compared to earlier ones? Doesn’t this explain how Morales’s lead rose to more than 10 percent as votes from more pro-Morales areas came in? Did you even look at this question?

Since I am an economist, I believe in incentives: I am offering a $500 reward for the first journalist who can get a substantive answer to these questions from an OAS official, on the record. Even if turns out to be a lie.