No one expects Thomas Friedman to base his columns on evidence, but he strayed even farther than usual today. The piece is a complaint that the United States is not prepared to deal with “a huge technological transformation in the middle of a recession.” The data won’t support that one.

The usual measure of technological progress is productivity growth. That has been lagging in this upturn, averaging close to 1.0 percent for the last three years. 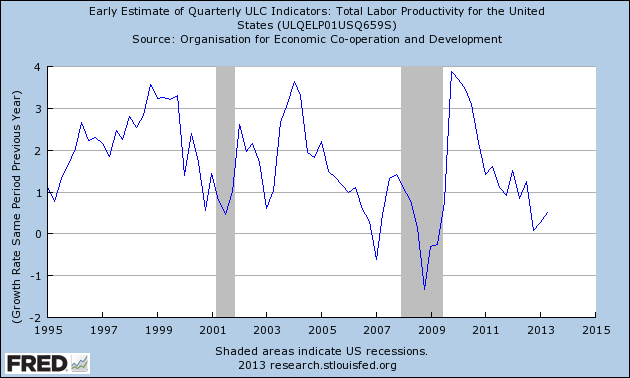 We know that Thomas Friedman has lots of stories from his cab drivers and other people that he talks to, but most of us might opt to rely on the data from the Bureau of Labor Statistics instead.

Friedman is also a bit behind the times in telling us about the loss of middle skilled jobs. That might have been a story for the 1980s, but the data have not supported Friedman’s story for at least a decade.

Friedman also feels the need to lecture liberals, saying they:

“need to think more seriously about how we incentivize and unleash risk-takers to start new companies that create growth, wealth and good jobs. To have more employees, we need more employers.”

Of course many people on the left have given lots of thought to exactly this issue. Putting a tax on financial speculation and breaking up the big banks would reduce the amount of resources diverted to unproductive activity in the financial sector. Developing a more efficient alternative to patent monopolies to support pharmaceutical research would free up hundreds of billions of dollars a year. And of course the main agenda item at the moment simply has to be to stimulate the economy to end the $1 trillion needless waste of potential GDP.

The problem is not a lack of thinking on the part of the left. The problem is that Friedman is too lazy to pay attention to what people on the left are saying.