That’s what readers can conclude from a piece headlined “several million U.S. workers seen staying out of the labor force indefinitely.” The problem with the piece is that, according to data from the Bureau of Labor Statistics, the overwhelming majority of workers who left the labor market during the pandemic have returned.

As can be seen, the labor force participation rate (LFPR) has risen back to levels seen in the first half of 2019 just 0.6 percentage points below the pre-pandemic peak. Perhaps the problem is that young people have left the labor market. 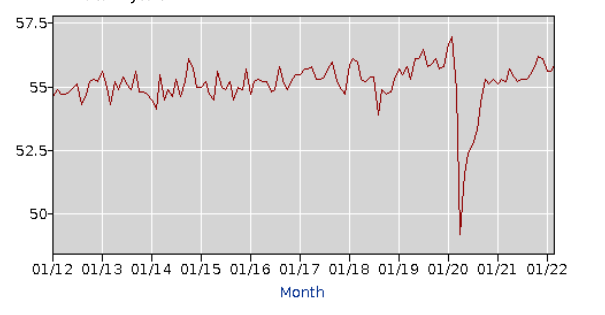 This one doesn’t fit the story either. The LFPR for workers ages 16 to 24 is higher than the average for 2019, although it is 1.1 percentage points below a one month peak hit in February of 2020, just before the pandemic hit.

Well, if prime age workers aren’t leaving the labor market and young workers are working in pretty much the same numbers as before the pandemic, maybe the issue is older workers taking early retirement. That one doesn’t fit with either, the LFPR for this group is the same as just before the pandemic and above the 2019 average.

So, where does the Wall Street Journal see its millions of missing workers? According to the Bureau of Labor Statistics there were still 800,000 workers who were not in the labor force in March because of concerns about getting COVID-19, being sick with COVID-19, or caring for a family member who had COVID-19. This figure pretty much fully explains the remaining shortfall in workers compared to the pandemic level. Presumably most of these people will go back to work, if the pandemic continues to fade.

There is one explanation for fewer workers than the Journal’s trend growth path. Under the Trump administration we sharply reduced the number of immigrants entering the country. The reduction in immigration undoubtedly slowed the rate of labor force growth, since the vast majority of people looking to immigrate are younger people who want to work in the United States. Incredibly, the piece does not once mention immigration.