Vacation as a Job Creator

Basic economic logic predicts that an increase in the productivity of American workers should lead to some reduction in work time, the logic being that workers would take some of the benefits of higher income in the form of more leisure. Despite substantial productivity growth over the last four decades, time-use studies show the opposite trend, average hours worked in a year have actually risen somewhat over this period. It is worth noting that the United States is very much an outlier in this respect. Average hours worked have declined sharply in other wealthy countries over this period, with workers in countries like the Netherlands and Germany now putting in 20 percent fewer hours than workers in the United States.

There is a simple microeconomic explanation for this rise in hours in the United States. The overhead costs associated with hiring another worker, most importantly health care benefits, can encourage firms to increase hours rather than add workers. Health care is far more expensive in the United States than in other countries, and it is typically provided as a per worker cost. This fact could go far toward explaining why hours worked and leisure time have followed a different course here than in other countries. 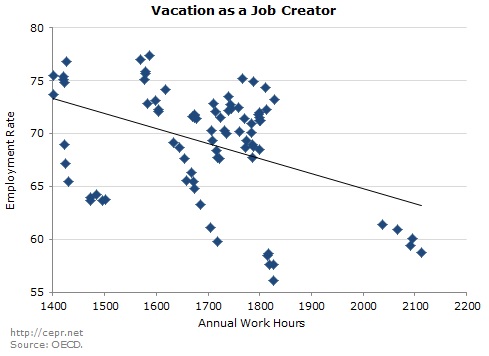 Unsurprisingly, problems that affect many individuals in a society have macro implications. Figure 1 plots the relationship between hours worked and the employment rate for 18 OECD countries between 2003-2007. I selected years of relative economic calm to try to understand the relationship between the variables because macroeconomic stability encourages more regular behavior among firms. The clear negative trend suggests that the culture of overwork has negative implications beyond employees and the firms who hire them.

Importantly, two dimensional graphs and lines of best fit have significant statistical limitations. Still, in a regression controlling for individual country effects, time, inflation, GDP, and GDP growth, the estimate of the coefficient on annual hours worked is statistically significant at 1 percent level. While this result is not robust into the Great Recession, it is suggestive at the very least.

If fewer hours per worker are associated with more employment, then it would provide another important argument for policies like mandatory paid sick days, family leave, and vacation. Not only would these policies help to facilitate work-family balance, they also would divide the work we have more evenly, thereby reducing unemployment. In a context where we are likely going to see a severely underemployed workforce for years into the future, this may be one of the best ways available to address unemployment.

Why Union Membership Is Good For Workers With Disabilities