The American economy added 203,000 jobs last month. That puts us on pace to have 5 percent unemployment by the end of President Barack Obama’s second term. Here to tell us more about the importance of fuller employment for the whole economy is one of our favorite jobs-numbers watchers, Dean Baker. (He appeared in our Making Sense segment about October’s numbers, warning us not to put too much stock in any one month’s report.) Baker writes the “Beat the Press” blog at the Center for Economic and Policy Research, which he co-directs.

When we talk about the woes of unemployment, we usually think of people who do not have a job. But higher levels of employment actually have the power to improve working conditions for people who already have jobs. In “The Benefits of Full Employment,” published in 2003, Dean Baker and Center on Budget and Policy Priorities’ Jared Bernstein explained how greater levels of employment help boost real wage growth for the bottom half of the income ladder. (Bernstein served as chief economic adviser to Vice President Joe Biden from 2009 to 2011.) Their new book, “Getting Back to Full Employment,” all of which you can read online, picks up where they left off — a decade and recession later.

Dean Baker and Jared Bernstein: There are people who spend their careers furrowing their brows and thinking great thoughts about how to lift people out of poverty. Undoubtedly many of these thoughts are useful and have helped shaped policy in positive directions. However, we would argue that the state of the labor market is at least as important for lifting people out of poverty as any anti-poverty program. 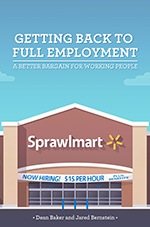 The basic point is straightforward. Low rates of unemployment create opportunities in the labor market for people who might otherwise never have a chance to get their foot in the door. And, for those who already have a foot at the bottom rung of the ladder, full employment provides them the opportunity to move up both with higher pay and more hours.

The evidence on these points is really striking. First, if we look at unemployment rates by demographic group, it is clear that disadvantaged groups get hit hardest when the economy takes a downturn. If we compare the current situation to the peak of the Clinton cycle in 2000, the unemployment rate for whites has risen from 3.5 percent in 2000 to 6.2 percent in the most recent data (November of this year), a rise of 2.7 percentage points.

Imagine that we could just snap our fingers and get back to the 2000 levels of unemployment for these groups. This would make an incredible difference in the lives of tens of millions of people at the lower rungs of the income ladder.

But this is only the beginning of the story. In our prior book, “The Benefits of Full Employment”, which was published in 2003, we did analysis showing that low rates of unemployment had a disproportionate impact on the wage growth for those in the bottom half, and especially the bottom third of the wage distribution. We first noticed this effect because the low unemployment years of the late 1990s were the first sustained period since the early 1970s in which workers at the middle and bottom of the income ladder benefited from wage growth. We updated this analysis in our next book and the results are even stronger.

We find, for example, that a bump down in the unemployment rate from its current rate of 7 percent to say, 6.5 percent, would lift the real earnings of low-wage workers by around 10 percent, middle-wage around 4 percent, and nothing at the top. What’s so notable about these findings is that they push in precisely the opposite direction of the factors that have been driving inequality up in America since the latter 1970s. Too often policy makers decry these factors — globalization, technology, less union power — as inevitable and thus unstoppable. They forget, or never learned, that full employment is a potent antidote.

In addition to boosting employment and hourly wages for those at the middle and bottom, full employment also gives these workers the opportunity to work more hours, further increasing their income. Here again, our results are much like those just noted on the wage side. Workers at the top of the income scale are already working at least full-time, so there’s little action for them on this margin. But for middle and especially low-wage workers, the gains in hours worked are another major benefit. The last time we were at full employment, in the latter 1990s, annual hours rose 17 percent for the poorest households and 1 percent for the wealthiest. Those gains at the bottom end were a major contributor to poverty reduction in those years.

Full employment also makes it possible for many people to find jobs who might not otherwise even think they had a chance of getting work. In the 1990s boom, there were accounts of suburban hotels and restaurants hiring buses to transport workers from the inner cities who might otherwise find the commute difficult or impossible. There were also accounts of firms making accommodations so that they could employ people with various types of disabilities. Needless to say, firms don’t go out of their way to track down such workers in the weak labor market we see today.

The fact that full employment offers such enormous benefits to the disadvantaged is one of the main reasons that we think it is important to get and keep it at the top of the national agenda. We know that we have a long way to go, but we do think we can get there. To see how, read the book.

PREVIEW: What the October Jobs Report Will Tell Us