In his Washington Post column today George Will told readers that the problem of rising costs in the U.S. health care system is simply a case of Baumol's disease. This refers to the problem identified by economist William Baumol (who recently died), that productivity in the service sector tends to rise less rapidly than productivity in the manufacturing sector. The implication is that if workers get paid the same in both sectors, then the cost of services will always rise relative to the cost of manufactured goods. Will tells us that this is the story of rapidly rising health care costs.

There are a couple of big problems with this story. First, it is not always the case that productivity in services rises less rapidly than productivity in manufacturing. ATMs have hugely increased the ability of banks to serve customers without tellers. Film developing became hugely more productive with digital cameras.

It is quite likely in the decades ahead that we will see innovations in technology that will lead to large increases in productivity in health care. For example, improvements in diagnostic technology will likely allow a skilled technician to diagnose illnesses with better accuracy than the best doctor. Similarly, robots will almost certainly be able to perform delicate surgeries with more precision than the best surgeon. In these and other areas of health care there is enormous potential for productivity gains, assuming that doctors and others who stand to lose don't use their political power to block the technology.

This brings up the second point. While health care costs have risen everywhere, no other country pays anything close to what we do in the United States, even though they have comparable outcomes. The figure below shows per capita health care spending in the United States and five other wealthy countries since 1971. (The numbers shown are from the OECD and expressed in purchasing power parity. I converted them to 2016 dollars using the PCE deflator.) 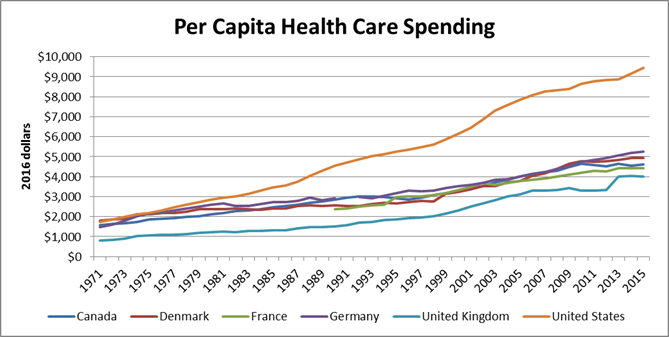 As can be seen, health care costs have been rising everywhere, but nowhere have they risen anywhere near as rapidly as in the United States. At the start of this period in 1971 the United States didn't even lead the pack in per capita spending, coming in slightly below Denmark. In 2015, health care costs in the U.S. were more than twice as high as in Denmark and France and almost 2.4 times as high as in the United Kingdom. Even if we compare costs with Germany, the second most expensive country in this group, the savings would still be almost $4,200 a year per person, or more than $1.3 trillion for the country as a whole.

The reason our health care costs have risen so much more rapidly than anywhere else is not Baumol's disease. Health care is a service everywhere, not just in the United States. The difference stems from the fact that doctors, insurers, drug companies, and medical equipment makers are far more capable of controlling the political process in the United States than in these other countries. They use their political power to restrict competition and get government subsidies. As a result, these actors are able to secure massive rents that come out of the pockets of the rest of us.

It is understandable that columnists and newspapers that would like to protect these rents would try to tell the public that high-cost health care is just a fact of nature, but it is not true.