One of the major changes in the Republican tax plan that became law at the end of last year was a limit of $10,000 on the deduction for state and local income taxes. This was explicitly designed as an attack on liberal states like California and New York, which provide relatively high quality services for their residents, and therefore have higher taxes. Many Republicans openly boasted that these states would face pressure to reduce their taxes, and therefore also cut funding in areas like education and health care, if state and local taxes were not deductible for all of their residents.

Republicans may exaggerate the effect of imposing a higher tax burden on these states. (For those keeping score, there was already a net outflow of money from states that tend to vote Democratic to those that vote Republican.) However, there is no doubt that it is harder for state and local government to raise revenue in a context where state and local taxes are not fully deductible than in a context where they are. In other words, Republicans are absolutely right in believing that they are hurting the finances of liberal states.

There have been various plans put forward to counter the Republican tax plan, but New York’s governor, Andrew Cuomo, is taking the lead with his proposal for an employer-side payroll tax that will substitute for a portion of the state income tax. This is a way to preserve the deductibility of a substantial portion of the tax revenue the state raises.

Cuomo proposes to have a 5 percent payroll tax on wage incomes in excess of $40,000. This tax would be phased in over a three-year period. It would also be voluntary so that companies did not want to go this route would not be required. Workers at companies that did go the payroll tax route would be subject to a different tax schedule that took account of the payroll tax paid by their employer.

The logic is straightforward. The conventional view among economists is that an employer-side payroll tax comes out of wages. This means that if an employer has to pay a 5.0 percent tax on the wage income of a worker earning $100,000 a year (e.g. $5,000), the employer will reduce the worker’s pay by $5,000.

If we suppose workers see this cut in pay, they are actually in the same situation as they were before the pay cut. When they were paid $100,000, they had to pay the state $5,000 in income taxes. (I am ignoring deductions and the zero bracket that actually exists for most income taxes.) This left them with $95,000 after paying their state income taxes. Now they are just $95,000, but they owe zero money to the state for income taxes.

While the worker’s situation with the state is unchanged, they are much better off when they file their federal taxes. For federal tax purposes, their pay is now $95,000, not $100,000. This means they won’t pay federal income tax on the $5,000 that their employer paid in payroll taxes. The switch to a payroll tax effectively preserved the deductibility of the money that had formerly been paid in state income taxes.

However, this switch has two other attractive features from the standpoint of workers in New York state. Even workers who don’t itemize will effectively be deducting the money paid in employer-side payroll taxes from their federal income taxes. In the case of the worker earning $100,000 a year, discussed above, they will benefit from having $5,000 less in taxable income regardless of whether or not they itemize their deductions.

The other feature is that this switch will also reduce what they have to pay in Social Security and Medicare taxes. Taken together, these taxes are equal to 15.35 percent of pay, counting both the employer and employee side of the tax. (The Social Security tax of 12.4 percent does not apply to income above $130,000.) While it is not desirable to reduce the revenue for these important programs, in a short-term context, this is an important way to put more money in the pockets of New York’s workers.[2]

The figure below shows the tax savings from Governor Cuomo’s plan for three hypothetical single individuals earning $60,000, $120,000, and $200,000 respectively. 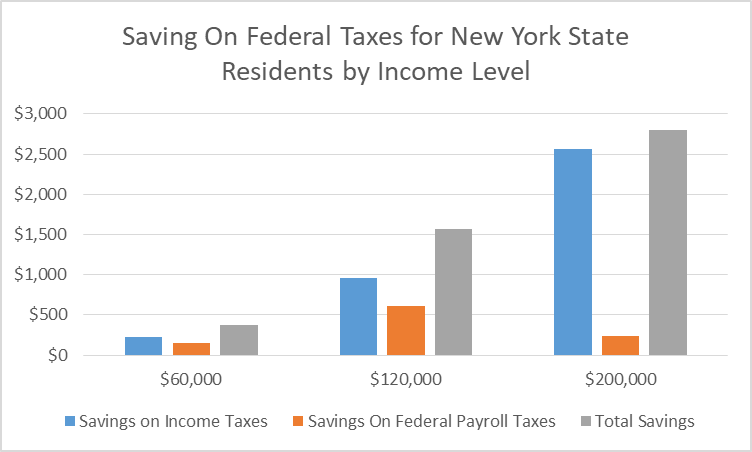 Very high earners could save even more money with this switch. Someone earning $1 million a year would see their federal tax liability reduced by more than $19,000 as a result of this switch. While a plan that disproportionately benefits higher-income taxpayers is not generally desirable, it is a reasonable response to a Republican tax bill that was explicitly designed to raise the tax burden of high-income people in more liberal states. Their hope, often stated explicitly, was to increase pressure to lower state tax rates and then lower the level of public services.

It is not a good practice for state governments to be designing mechanisms for gaming the federal tax code. However, when Republicans in Congress are explicitly using the federal tax code to target states controlled by Democrats, maneuvers like adopting state-level employer-side payroll taxes are a reasonable response. It would be foolish to pretend that everything is normal in Washington when that is clearly not the case.

[1] The logic of a 3-year phase-in is that employers would be able to adjust pay by not giving workers pay increases they otherwise would have received, rather than just lowering their pay by 5.0 percent.

[2] Workers getting lower pay will receive somewhat lower Social Security benefits when they retire. Ideally, the state will encourage workers to put at least some of their tax savings in a retirement account.