As we noted in an earlier post, the overall rate of part-time employment has not moved much over the past four decades. Another thing that has remained fairly constant over this time is that women work part-time at nearly double the rate of men. 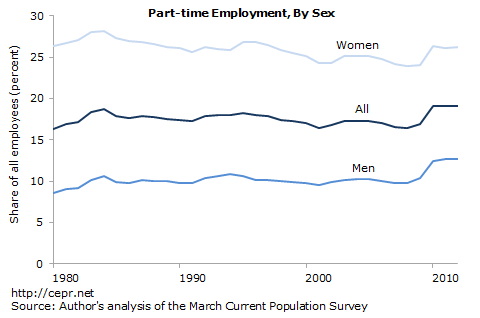 As the figure below demonstrates, the main reason for higher part-time rates among women is that they “choose” part-time jobs for what the Bureau of Labor Statistics calls "noneconomic" reasons. When it comes to those who involuntarily work part-time, men and women are at increasingly identical rates. 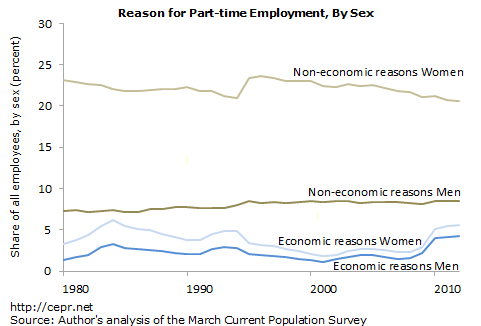 This "voluntary" difference between women and men in part-time jobs stems mostly from gender inequality in the home, rather than the workplace. Even as women’s standing in the workforce has improved over the years, women continue to hold part-time jobs at a nearly constant rate. Women "choose" part-time jobs primarily because they are more compatible with their outsized unpaid work responsibilities including household work and childcare. When asked why they work part time, women answer “Child care problems” at more than seven times the rate that men do, and are almost four times more likely than men to cite “Other family/personal obligations.” In fact, of the people who usually work part-time and answered “Child care problems” as their reason why, 94.6 percent were women. 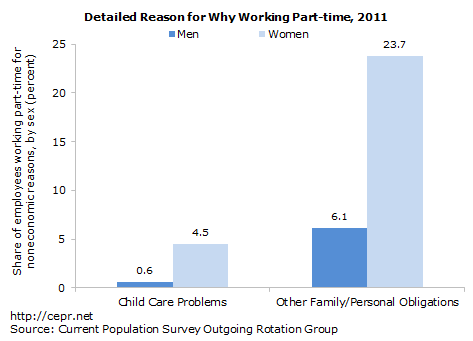 At least with respect to this aspect of workplace inequality – and almost certainly with respect to others as well – further progress for women depends on reducing the long-standing gender disparities in housework, child-care, and other forms of care work.

This post corrects an earlier version that contained data errors in the first two graphs.