There is widely held view in Washington policy circles that the economy was golden in the Clinton years. We had strong growth, low unemployment, rising real wages, a soaring stock market and huge budget surpluses. According to this myth, George W. Bush ruined this Eden with his tax cuts for the rich and wars that he didn't pay for. While there are plenty of bad things that can be said about George W. Bush, his tax cuts for the rich and his wars (whether paid for or not), this story of paradise lost badly flunks the reality test.

At the most basic level, the chain of causation is fundamentally wrong. The driving force in this story was the soaring stock market, which was in fact a bubble. Stock prices had grown hugely out of line with the fundamentals of the economy. The ratio of stock prices to trend earnings at the market peak in 2000 was over 30 to 1, more than twice the historic average. It was inevitable that this bubble would burst and in fact the unwinding actually begin when Clinton was still in the White House. The overall market was down more than 10 percent from its peak by January of 2001 and the Nasdaq was down close to 30 percent.

This collapse was the basis for 2001 recession which began less than 2 months after President Bush stepped into the White House. This downturn was the main cultprit in eliminating the cherished Clinton budget surplus, not the tax cuts or the recession. This can be shown in an extension of a graph developed by the Center for Budget and Policy Priorities which shows the sources of the deficit in the Obama presidency. 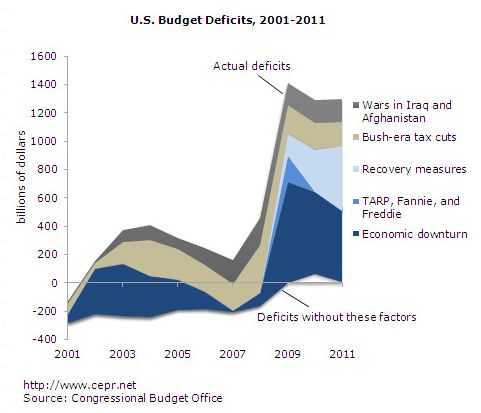 Note that the budget would have shifted from surpluses to deficits in 2002 even if there had been no tax cuts and no increase in military spending associated with the wars in Afghanistan or Iraq. While neither of these may have been good uses of public money, they did not cause the deficit. The downturn following the collapse of the stock bubble led to the deficits in 2002-2005.

The additional deficits caused by wars and tax cuts were actually a positive for the economy in these years. From an economic standpoint there would have been much better uses of this money, but this spending did help to boost the economy at a point where it desperately needed a lift. While the Fed was not quite at the zero bound in terms of its monetary policy, it had lowered the federal funds rate to 1.0 percent by the summer of 2002.

Most economists would say that there is not much difference between a federal funds rate of 1.0 percent and a rate of zero like we have now, meaning that the Fed would not have been able to provide much additional lift to the economy in 2002-2004 unless it adopted the sort of extraordinary policies that we are seeing today. In this context, it is hard to see an argument against fiscal stimulus, which means deliberately raising the deficit to boost the economy. The deficit would have been much more effective if it had been spent on areas that would provide a direct boost to the economy such as infrastruture or education, but the economy was almost certainly better off as a result of the Bush deficits than if he had tried to maintain a balanced budget as we went into the downturn.

Ultimately the housing bubble grew large enough that it was able to boost the economy nearly back to full employment. By 2006 and 2007 the budget would have again been surplus had it not been for the wars and tax cuts. Of course the collapse of the bubble elminated the prospect of balanced budgets or anything like them for the foreseeable future.

The moral of the story is that the surpluses/small deficits of the last 15 years were the result of bubbles. It is not a good idea to rely on asset bubbles to fuel economic growth or to provide the basis for fiscal responsibility. The result was disastrous when Bush led us down this path. The picture was not much prettier when Clinton went the same route a decade earlier.