This is the first blog post in a three-part series on the Affordable Care Act’s potential effects on part-time employment. The second and third posts can be found here and here.

In 2013, shortly before the main provisions of the Affordable Care Act (ACA) went into effect, critics warned that the law might have dire effects on working hours. They said that the ACA would lead employers to shift workers from full-time to part-time positions, prompting a dramatic increase in involuntary part-time employment. CNBC host Maria Bartiromo argued that the law would make the U.S. “a part-time employment country”; Washington Post columnist Robert Samuelson and others stated that the U.S. would become “a nation of part-timers.” In contrast, there is an extensive literature on health insurance related “job lock.” (Gruber and Madrian review this literature.) According to this literature, there is reason to believe that many workers are employed full-time only because they need health care insurance. If they have the option to get insurance outside of employment, they may decide to take time off from a job to care for children or other family members, they may start their own business, or they may decide to work part-time. There is considerable evidence that many workers have chosen the option of voluntary part-time employment since the exchanges were put in place at the start of 2014. 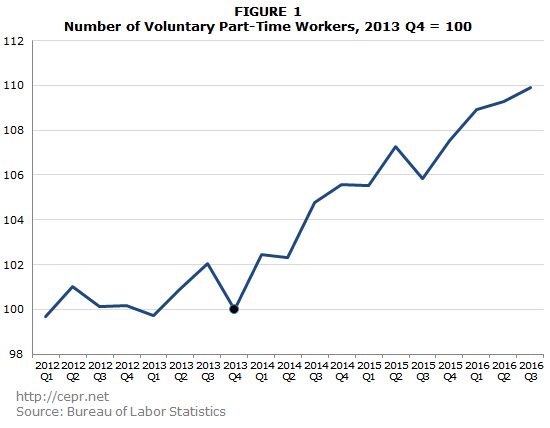 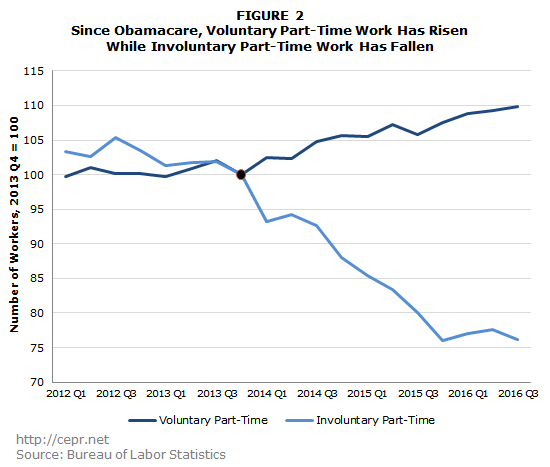 The Increase in Voluntary Part-Time Work Was Historically Unprecedented 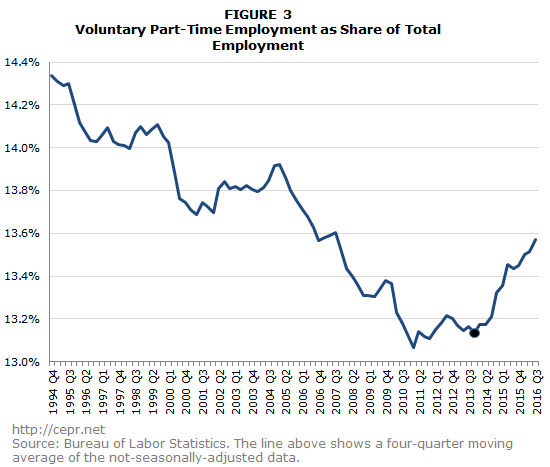 Table 1 shows the year-over-year percent changes in the number of voluntary part-time workers from 1994 to present. As can be seen, the increase following the fourth quarter of 2013 was the largest recorded increase since the BLS changed how it measures part-time employment: 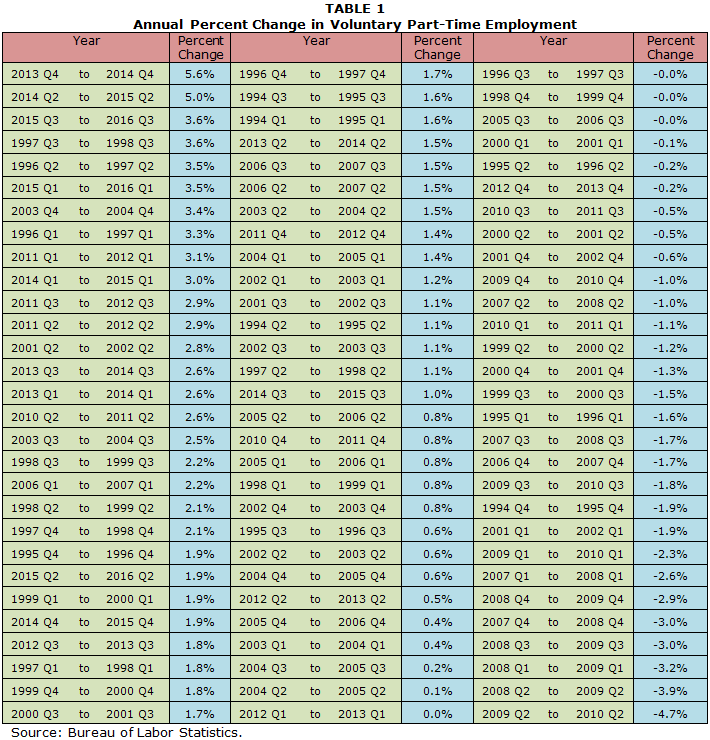 Right after the ACA went into effect, there was an historically unprecedented increase in voluntary part-time employment which reversed a 19-year downward trend. It is hard to see what explains this reversal other than the ACA.

Finally, it should be noted that the rise in voluntary part-time employment mostly reflects changing preferences on the part of the labor force – not just, say, a decline in unemployment among part-time workers. In the fourth quarter of 2013, 13.2 percent of the civilian labor force – a measure that includes unemployed workers seeking jobs along with all employed workers – expressed a preference for part-time work. That rose to 13.4 percent during the first quarter of 2014 and had reached 13.6 percent by the fourth quarter of that year. Most recently, during the third quarter of 2016, it stood at 13.8 percent. In other words, the increases depicted in Figure 3 and Table 1 mostly reflect a changing preference by workers for part-time hours.

(Figure 4 and Table 2 in this PDF present variations of Figure 3 and Table 1 that instead use seasonally-adjusted quarterly data.)

This is consistent with the view that many workers were forced to work at full-time jobs solely because of their need for health insurance for themselves and/or their families. The Affordable Care Act clearly made part-time employment more attractive by decreasing the risk of going uninsured when shifting from full-time to part-time work.

The Story Matches the CBO’s Findings

In February 2014, the Congressional Budget Office (CBO) released its normal yearly report on the federal budget. Appendix C – an 11-page section near the end of the report – contained new estimates of the ACA’s predicted effect on the labor market. The CBO predicted that there would be a voluntary reduction in employment among workers – specifically, there would be the equivalent of 2.0 million fewer full-time workers in the economy by 2017 and the equivalent of 2.5 million fewer full-time workers by 2024.

In fact, the CBO estimated that just one-third of the decrease in labor supply would come from people leaving the workforce, while two-thirds would come from workers cutting back on their hours. Specifically, the office posited that by 2021, just 800,000 workers would leave the labor force as a result of the ACA; by contrast, it estimated that the reduction in “full-time equivalent employment” for that year would be 2.3 million workers (pg. 127). By 2024, CBO expected that “substantially less than 2.5 million” workers would actually leave their jobs, while “more than 2.5 million people” would merely cut back on their hours. The CBO’s projections, based on a review of the literature on this topic, clearly mirror the increase in voluntary part-time employment that we have seen since 2014.

Finally, it is worth noting that CBO arrived at similar results when it updated its original findings in December 2015. These more recent estimates indicate that the ACA’s effect on reducing labor supply will be about 81 to 91 percent as large as originally predicted.