The Growth of Finance, In Graphs

Over the past three decades, the top 1 percent’s share of national income has more than doubled. In 1978, the richest 1 percent of income earners made less than 9 percent of total income; by 2014, their share was over 21 percent.

The growth of the financial sector has been one of the primary drivers of this increase. During the 1940s to 1970s, finance typically accounted for about 3 to 4 percent of GDP; by 2005 and 2006, just before the financial crisis, finance claimed 7.6 percent of GDP. While the industry’s share of national income fell during the recession, it is back above 7 percent today.

This matters for inequality because finance is the source of many the highest paying jobs in the economy. As Nouriel Roubini and Stephen Mihm explain in their book, Crisis Economics:

The cancerous growth of financehas arguably had significant social costs too, as innovation and creativity have fled from manufacturing and other old-fashioned industries in favor of Wall Street. Indeed, since the 1970s, as our colleague Thomas Philippon has revealed, finance has attracted an ever-growing number of intelligent, highly educated workers. As compensation soared, graduates of elite schools increasingly went to Wall Street. In fact, among Harvard seniors surveyed in 2007, a whopping 58 percent of the men joining the workforce were bound for jobs in finance or consulting. In a curious paradox, the United States now has too many financial engineers and not enough medical or computer engineers (Roubini and Mihm 2010 pg. 190-91).

During the period of rising inequality (1978–2014), the financial sector has experienced only slightly faster employment growth than the rest of the economy. In 1978, finance employed just 5.5 percent of the nation’s workers and 6.8 percent of all private-sector workers. Finance’s share of total employment rose over the next ten years, peaking at 6.5 percent in 1987. After a decade of below-average employment growth, finance’s share of total employment again began to rise, hitting a 15-year peak of 6.3 percent in 2006. Perhaps unsurprisingly, finance claimed a disproportionate share of all job losses during the 2008 financial crisis, though even today the sector’s share of employment is about half a percentage point above its 1978 share. This can be seen in Figure 1 below. 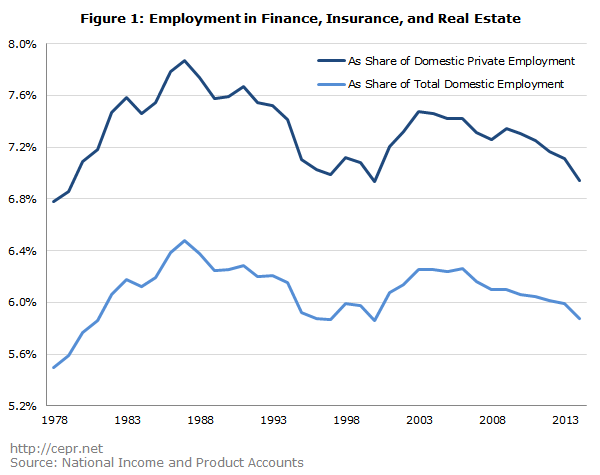 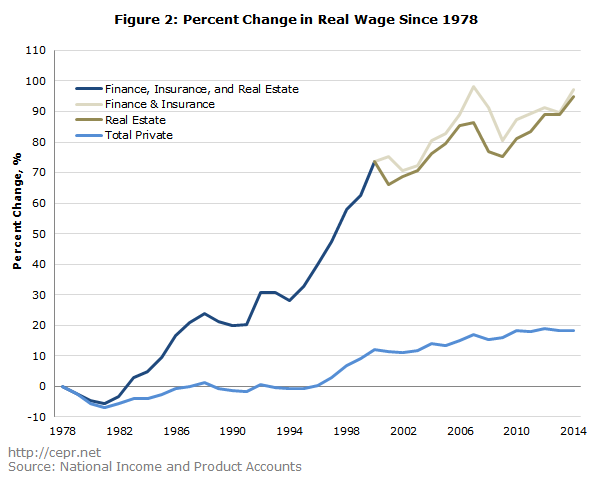 Since 1978, finance has seen a moderate increase in its share of the workforce and a dramatic increase in pay per worker. These two factors have allowed finance to capture a growing share of wages. In 1978, 5.5 percent of total wages and 6.9 percent of private-sector wages went to people working in finance. These figures are in line with finance’s share of total employment at the time, indicating that wages in the sector were quite average. In fact, in 1978 the average annual pay (in 2014 dollars) of a full-time worker in the financial sector was $48,300. This was about the same as the average full-time worker’s annual salary of $48,100. (The idea that bankers need to be highly paid is therefore a very recent phenomenon.)

However, due to the strong growth in both wages and employment, finance’s share of total wages has increased nearly every year since 1978. By 2007 — on the eve of the financial crisis — finance was taking home over 11.7 percent of the nation’s total pay and over 9.7 percent of all private-sector pay. While those figures have since fallen to 11.1 and 9.2 percent, respectively, they are far higher today than they were in 1978. This can be seen in Figure 3 below. 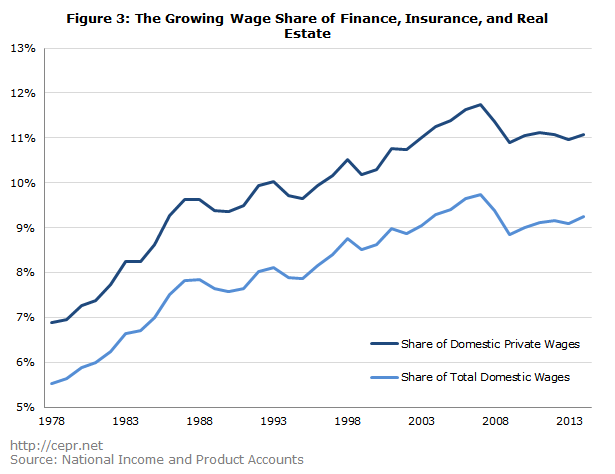 In public opinion polls, most Americans say that they are being left behind in today’s economy. They recognize that the economy is growing, but claim that they have not been allowed to share in its gains.

The growth of the financial sector is a big part of the reason why.