Last week, the Aspen Institute hosted a discussion on “the future of work in the sharing economy,” which focused on company platforms that facilitate the exchange of property, space, or labor. I consider myself fairly well acquainted with all three sides of this economy, especially when it comes to labor, so I wanted to weigh in here.

Over the years, I have worked a variety of odd jobs to help pay for school and living expenses, such as giving swimming lessons, babysitting, tutoring, and working as a family assistant, where my responsibilities have covered everything from dogwalking, buying groceries, paying bills, to researching preschool admissions processes. Most of these jobs were on-demand, made to accommodate both my schedule and those of my customers/clients. This does not even include my “regular” employment history of working as a university resident assistant, research fellow, lifeguard, security guard, and in various internships. I still laugh when I remember bonding with one of my roommates over always being “on the hustle” (the legal variety, of course). In the months since my graduation, I have also been an avid adopter of Craigslist, having found my apartment, bike, most of my furniture, and even kitchen supplies on the platform.

Therefore, I found myself easily identifying with Sarah Kessler’s, one of the event panelists, experiences as a “micro-entrepreneur” for a Fast Company piece published last spring. In that relatively short span of time, she worked as a tutor, performed various administrative tasks, sorted someone’s mail, labeled photo slideshows, wrapped presents, and danced in a proposal flash mob. By the end of Kessler’s experiment, “instead of the labor revolution [she] had been promised, all [she] found was hard work, low pay, and a system that put workers at a disadvantage.” Aspen provided a handy guide to what constitutes the sharing economy, which included the following chart of such pluses and minuses for workers, several of which were discussed by Kessler. I have had the fortune of not having to work in a race to the bottom for compensation, but I share her concerns over the hype of workers’ supposed freedom and flexibility. We have both had experiences with last-minutes cancellations and rescheduling, as well as the corresponding reality of unpredictable income. 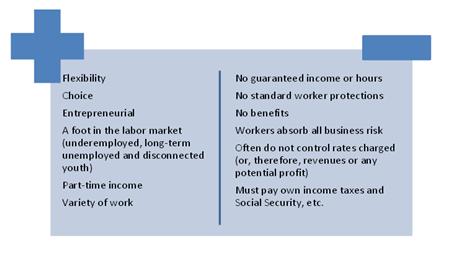 Though I enjoyed the work overall, I also had the privilege of knowing that it was a short-term band-aid until I could find a steady job with a regular paycheck and benefits. For many others, they may not have other options. Work for the sake of a measly income can distract from school, training, job applications, and time spent with family, but bills are immediate. A recent New York Times piece delved into this reality of steady bills and irregular paychecks, a trend which unfortunately appears to be on the rise. Steven Strauss, another one of the event panelists, pointed to the development of just-in-time scheduling, which similarly disadvantages workers and makes scheduling classes and other jobs nearly impossible. Both just-in-time employees and independent contractors often have loved ones to support, and their irregular schedules have even led to what one reporter has called “the rise of extreme daycare.”

Rather than touting the sharing economy as giving workers more choice, more attention should be paid to those who simply have no other choice. Increased support for work-sharing programs, unemployment insurance, educational accessibility, affordable day care, and higher minimum wages are all examples of choices we can make to reduce inequality and create more inclusive economic growth.  Such policies are long overdue, as work in the sharing economy is simply a new incarnation of the informal sector seen in the world over. The largest development here is technology’s role as an intermediary between workers and employers.