The Federal Reserve Board and Aid to Lower-Income Families

Donald Trump will soon make a decision on whether to reappoint Janet Yellen as chair of the Federal Reserve Board or to pick someone else. This decision is getting far less attention than it deserves.

The Fed makes an enormous difference in the lives of tens of millions of people, especially low- and moderate-income people. Its decisions on interest rate policy can determine how many people in the country have jobs. If the Fed raises interest rates and slows the rate of job creation, the people who are most affected are the most disadvantaged in society. Blacks, Hispanics, and the less educated will be the ones who are most likely to be denied jobs as a result of higher interest rates.

Furthermore, a weaker labor market also reduces the bargaining power of those who do have jobs. This means that they will get lower wages than if we had a lower unemployment rate.

This is relevant to the Yellen’s reappointment since there were many economists, both outside the Fed and on the Fed, who felt that she allowed interest rates to remain too low for too long. They would have preferred to raise interest rates more and sooner than the Fed did under Yellen’s leadership.

In addition, workers at the middle and bottom of the wage distribution also saw substantial increases in real wages in the last two years. Workers at the 25th percentile actually had slightly lower real wages in 2015 than they had before the recession in 2007. In the most recent data, their pay is more than 5 percent higher.

If we combine the 3 percent increase in employment and the rise in real wages associated with lower unemployment, income of low-paid workers would be as much as 8.0 percent higher than in 2015 because the Fed allowed unemployment to continue to fall, instead of trying to put a floor on the unemployment rate near 5.5 percent.

This has had a large impact on the least advantaged workers. If we just assume that 3.0 percentage points of the wage growth since 2015 was due to low unemployment, as opposed to the full 5.0 percent, it implies an increase in wage income for less advantaged workers of more than 6.0 percent.

This implies an increase in wage income of almost $49 billion for the bottom quartile of the wage distribution.[1] By comparison, federal payments for food stamps in 2017 are projected to be $70 billion. This means that the additional pay to low paid workers as a result of the Fed’s willingness to allow the unemployment rate to continue to fall in the last two years is equal to roughly 70 percent of the annual food stamp budget, as shown in the Figure below. 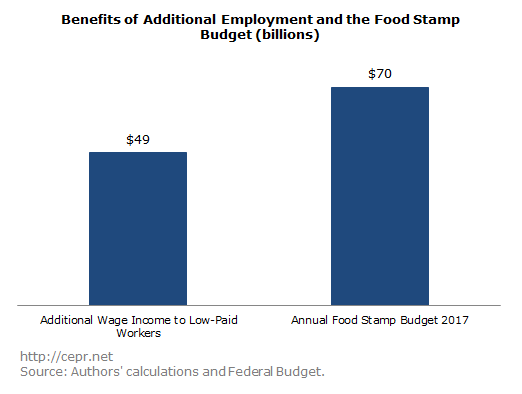 If there were a proposal in Congress to cut or increase food stamp spending by 70 percent, it would almost certainly get a great deal of attention from liberal groups. Yet somehow, the Fed’s decisions to raise or lower interest rates, which could easily have an effect this large, gets almost no attention.

It’s not clear how much impact liberal groups can have on Donald Trump’s decision to reappoint Janet Yellen as Fed chair, but there should be no doubt, this is a really big deal.