The Housing Bubble: Is It Coming Back II?

While inflation-adjusted house prices are still far below bubble peaks nationwide, they have been outpacing inflation for the last five years and are well above their long-term trend levels. However, these prices may be justified by unusually low-interest rates (both real and nominal) in the years following the Great Recession. Also, unlike the bubble period, rents have been outpacing inflation in most markets, suggesting that house prices are responding to the fundamentals of supply and demand in the housing market rather than being driven by a speculative frenzy.

Nonetheless, there are sharp divergences in trends by geographic market area. The Case-Shiller tiered house prices index has been showing the sharpest increases in the bottom third of the market in most of the cities it covers. This raises the possibility that at least this segment of the market may be driven by speculation rather than fundamentals.

In a paper in the fall of 2016, CEPR examined the evidence in some of these cities to see if rents appeared to be following in step with house prices in the bottom tier of the Case-Shiller indices (CSI). As a measure of rents, we used the Department of Housing and Urban Development’s estimate of the fair market rent (FMR) for a two-bedroom apartment. This measure is somewhat different in construction from the Case-Shiller indices. It is not measuring the rent changes for a fixed set of units, but looks at average rents for different units year-by-year. Nonetheless, it should give a reasonable approximation of trends in the segment of the rental market that most directly competes with the bottom third of the home sale market.

There were several markets in which the rise in the CSI had substantially outpaced the rise in the FMR in recent years. In most cases, these gaps could be plausibly explained by robust job growth and low vacancy rates, which were driving both higher, but having a greater impact on sale prices. However, this is not clear in all cases.

The chart below shows the nominal changes in the CSI compared with the FMR since 2015. There are several cities where the former substantially outpaces the latter, increasing the gaps shown in the earlier paper. 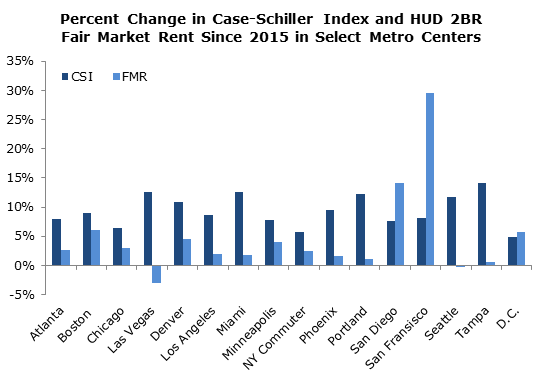 Starting with Boston, sale prices continue to outpace rental prices. The bottom tier of the CSI index is almost back to its inflation-adjusted bubble peak. By contrast, the middle tier is more than 10 percent below the bubble peak and the top tier is more than 20 percent lower. The vacancy rate in Boston is low compared to the national average, but somewhat higher than it had been in prior years. This suggests prices in the bottom tier could be getting out of line with fundamentals.

The market in Las Vegas also provides some grounds for concern. Sale prices in the bottom tier of the market have far outpaced the other two tiers, although they are still far below bubble peaks. The vacancy rate is close to the national average, so there does not appear to be an overly tight market. If this double-digit rate of growth continues for much longer, it is likely to mean this segment of the market is in a bubble.

The west coast cities have seen rapid price increases, but they also are seeing strong economic growth which is pushing up rents as well. If the tech sector takes a dip, then these housing markets will likely be hit as a well. But as long as the companies driving the boom, and their stock prices, stay strong, the house prices likely make sense.

In short, there are grounds for concern about excessive prices in the lower tier of the housing market in several cities, but none of the cities in the Case-Shiller index provide a clear example of a bubble.