The AP reported yesterday that, “the number of Haitians still displaced by the 2010 earthquake has dropped below 200,000… That marks an 89 percent decline since the camp population peaked in July 2010 at 1.5 million people.” According to official figures, the camp population currently stands at 171,974, compared to over 278,000 in June of 2013 at the time of the last report. The drop is the largest over a single reporting period in nearly three years.

Yet, looking closer, over 50 percent of this reduction since June is the result of a decision by the International Organization for Migration (IOM), the entity which monitors the camp population, to remove three areas, Canaan, Jerusalem and Onaville from the official camp list. Together, these three areas are home to an estimated 54,045 individuals. The IOM report states:

On July 11th 2013, the Government of Haiti represented by UCLBP (Unité de Construction de Logements et Bâtiments Publics), submitted a formal request to IOM to remove the three settlements from the DTM (i.e. from the list of IDP sites that exist in the country).

The UCLBP request is motivated by the observation that the characteristics of these settlements are those of “… new neighborhoods needing urban planning with a long term view …”, not of IDP sites.

But the situation facing those who reside in the three areas is far from secure. This week Amnesty International reported that:

Residents of the Lanmè Frape area of Canaan, an informal settlement in the municipality of Cabaret, on the northern outskirts of the capital, Port-au-Prince, have had their simple dwellings repeatedly destroyed by police officers accompanied by armed men. The residents told Amnesty International that they have been the victims of attacks on more than 10 occasions over the last 18 months and several of them have also been arrested on unfounded charges for periods of up to a month. Two hundred families currently remain in the Lanmè Frape area, although as many as 600 lived there before the forced evictions began.

Amnesty continues, describing how the area came to be occupied:

The Lanmè Frape area of Canaan is part of a large tract of land which the then government declared for “public use” (utilité publique) two months after the earthquake in March 2010. Tens of thousands of people who lost their homes in the earthquake have subsequently relocated there, but many face eviction from people claiming ownership of the land.

Beyond the previously “official” camp communities of Canaan, Jerusalem and Onaville, it is believed that tens of thousands more families have moved to the surrounding area since the earthquake. Over the last year, the UCLBP has lobbied the international community for funding to make investments in urban planning for the area. According to minutes from the February 2013 Haiti Reconstruction Fund (HRF) meeting (PDF), the head of the UCLBP, Odnell David, made a presentation requesting $15 million as part of a $50 million project to address the situation in Canaan-Jerusalem. The government “has a moral obligation to take care of these people and undertake investment,” David said. Yet, although donor countries all supported the use of HRF funds for investments in the Canaan area, when funding decisions were made this September, no resources were allocated for the project.

There were also other motives for addressing the displacement crisis in Canaan. According to the official minutes, the David explained that, “this area poses a threat to neighboring industrial and touristic development.” Two weeks later, at the next HRF meeting (PDF), he described how this “project is the starting point for the larger project of developing the entire northern area of the city of Port-au-Prince.” 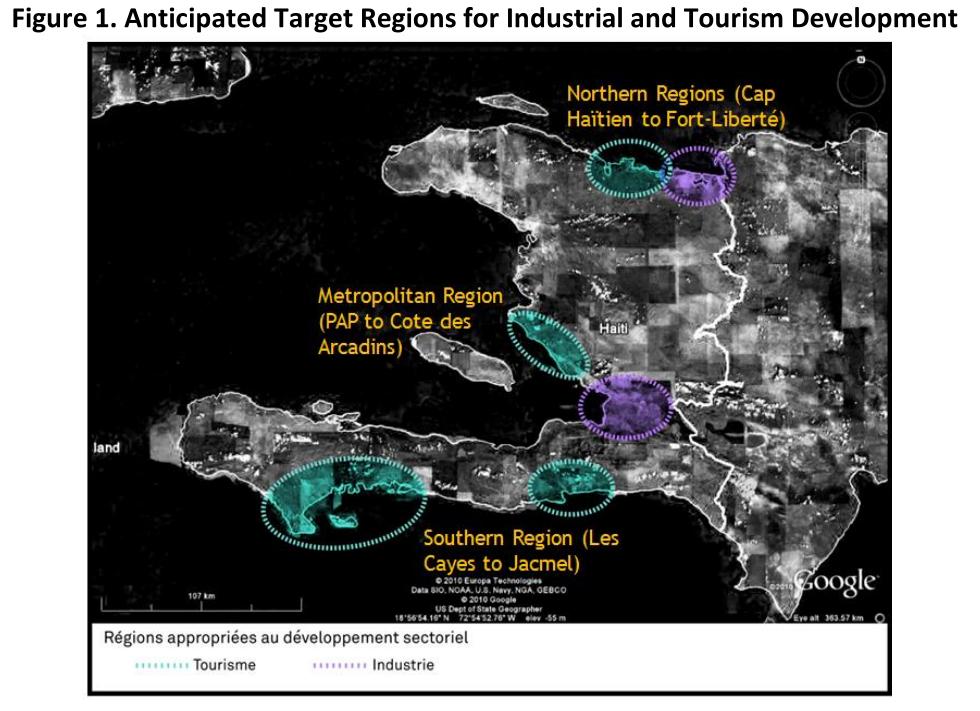 The area in question has long been the planned site for the development of an “integrated economic zone,” which would include an industrial park. Yet the influx of those displaced after the earthquake has slowed these plans. The developer who owns the land, Gérard-Emile “Aby” Brun acknowledged in an interview with Haiti Grassroots Watch in July of last year that the “project has essentially ‘fallen apart’ because of the invasion of some 60,000 squatters into the region after the René Préval government declared the land ‘public utility.’”

The need for investments in urban infrastructure for the area is clear, but the lack of financial resources dedicated to this effort and the involvement of police in the forcible eviction of those living there, raises concerns about the government’s intentions. Without their official status as IDPs, those living in the areas of Canaan, Jerusalem and Onaville may not be afforded the oversight and protection needed to abate future violent evictions.