However, since 2000 this trend completely reversed. Between 2000 and 2015, the employment rate for women in Japan increased by almost 14 percentage points, while in the U.S. it dropped by over 6 percentage points. Japan’s employment rate for women surpassed the U.S. in 2014. Currently, almost 65 percent of Japanese women are employed, while only about 63 percent of women in the US are employed.

In recent years, Japan has launched extensive campaigns to encourage labor force participation by women. The government took various steps such as increasing allowances given to new parents, subsidizing daycare, and ensuring both mothers and fathers benefit from paid parental leave. 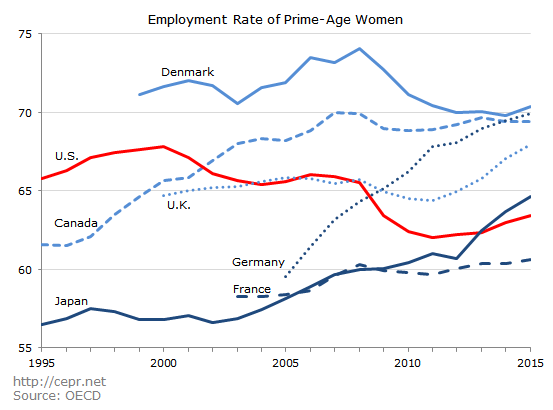 A look at the employment rate for women in some other OECD countries over time shows that other countries had increases similar to Japan’s. The only country besides the U.S. where the participation of women in the labor force has decreased since 2000 is Denmark, which has seen a 1.8 percentage point drop in the employment rate of women. Despite this drop however, Denmark still boasts one the highest employment rates for women of any country in the world. 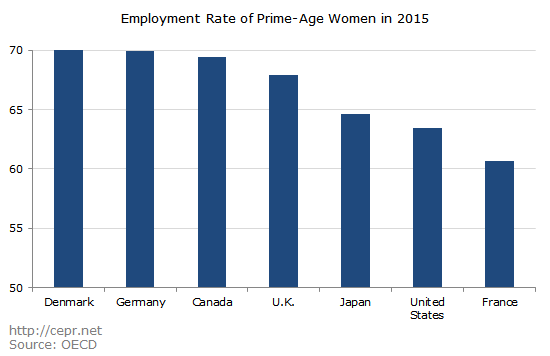 Furthermore, child care costs in the U.S. are extremely high, and are growing at a much faster pace than overall inflation. The rising costs of childcare make it unaffordable for many parents, especially for low-wage workers. The Economic Policy Institute found that childcare costs in some areas can take up more than a quarter of a family’s income. In some states, costs for daycare are higher than for college tuition.