In December 2010, the AP conducted an analysis of Haitian earthquake contracts given out by the US government, finding that only $1.60 out of every $100 went to Haitian companies. In the story, USAID responded:

US AID says it is committed to increasing the amount of contracts going to Haitians.

“We already are engaging with Haitian communities to make them aware of how they can partner with us,” said Janice Laurente, a spokeperson for US AID.

Table 1 shows the breakdown of contracts going to Haitian firms organized by the date the contract was signed. As can be seen, after originally being neglected, Haitian firms fared better from February 2010 through November 2010, receiving 5 percent of the value of all contracts. Since December 2010, however, not a single Haitian company has received a contract despite nearly $20 million being awarded in the last five months. The last contract awarded to a Haitian firm was actually signed on November 9, 2010, according to FPDS records. 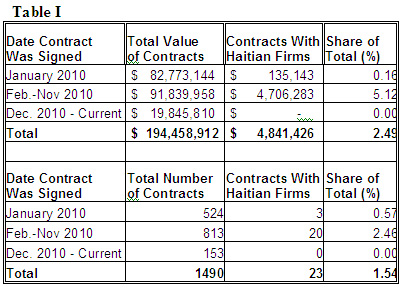 While Haitian firms have largely been left on the sidelines, Beltway contractors (from DC, Maryland and Virginia) have received 39.4 percent of the nearly $200 million in contracts, as can be seen in Table II. Two of the largest Beltway contractors, DAI and Chemonics, we have written about numerous times before.

Despite the statement from USAID atop this post, they have actually been one of the worst US government agencies in terms of contracting to local businesses. USAID has awarded contracts totaling $33.5 million yet not a single contract has been awarded to a Haitian company. In addition, an astounding 92 percent of contracts awarded by USAID have gone to Beltway contractors.

Which Haitian Firms Are Getting Contracts?

Sanco Enterprises received nine contracts between February 2010 and October 2010 for “life services”, predominantly waste removal, water delivery and supplying porta-potties. Sanco, however, has not received a contract since October when the cholera epidemic began to spread throughout Haiti. A leading theory as to the cause of the cholera outbreak was improper waste removal at a Nepalese UN Peacekeeping base. The company that had the UN contract for waste removal at the base was Sanco Enterprises.

Terminal Varreux is the main port near the capital and is owned and operated by the WIN group, which is one of the largest conglomerates in Haiti and is run by the Mevs family. Tracy Wilkinson, writing for the Los Angeles Times shortly after the earthquake, described one of the partners at the WIN group, Gregory Mevs:

He has the prime minister’s ear. He hobnobs with people like Bill Clinton, George Soros and the chief executives of the world’s largest corporations. He is one of Haiti’s storied elite, a member of one of the six families that control the Haitian economy and have essentially called the shots here for generations.

Distributeurs Nationaux, a fuel distribution company, is part of another one of the largest Haitian conglomerates, the GB group run by Gilbert Bigio. In 2009, Distributeurs Nationaux, with the help of an $18 million loan from the Inter-American Development Bank, acquired the assets and operations of Chevron Haiti. The GB group, together with Ashbritt (an American contractor we have written about previously) formed the Haiti Recovery Group (HRG). HRG was recently the subject of a lawsuit by the former USAID reconstruction coordinator Lewis Lucke. Lucke contends that he is owed $500,000 for helping HRG secure reconstruction contracts.

Patrick Delatour, Haiti’s tourism minister, leads a commission that has been crafting plans to rebuild Port-au-Prince and other earthquake-devastated areas. He acknowledged he is 5% owner of GDG Concrete and Construction, which he started in 2000 with his cousin. The company, which calls itself Haiti’s only supplier of ready-mixed concrete, helped construct the U.S. Embassy and several other major buildings in Port-au-Prince, it says on its website.

Sol Haiti is another fuel distribution company, with operations throughout the Caribbean. Sol took over Shell’s assets in much of the Caribbean in 2005 and took over Exxon-Mobil’s assets when the former divested from Guyana, Suriname and Haiti in 2007.