Holiday Season Is Time for Compassion for Billionaires: The Case of Jeff Bezos and Amazon

By Dean Baker and Evan Butcher

We all know how hard it is to get by in today’s competitive economy. That’s why billionaires need special help. The Wall Street folks got their multi-trillion bailout in the form of below market interest rate loans when their greed and incompetence would otherwise have put them into bankruptcy. The drug companies get longer and stronger patent monopolies both here, and with trade deals like the Trans-Pacific Partnership, around the world. And, Jeff Bezos and Amazon get tens of billions of dollars in handouts in the form of an exemption from collecting the same sales tax as his mom and pop competitors.

The basic story here is simple. States require that stores collect sales tax on the items they sell. This applies to every mom and pop book store or clothing store, as well as huge retailers like Walmart and Costco. Amazon, along with other Internet only retailers, has been able to escape this requirement in most states through most of its existence.

And, make no mistake; the exemption from the requirement to collect sales tax is a subsidy. The tax is directed at the customer, the retailer is performing a service for the government. Effectively, the exemption is allowing the retailer to profit by charging a price that is equal to the price a competitor charges plus the tax. For example, if a television sells for $400 in a state with a 5 percent sales tax, the Internet competitors can sell the same television for $420 and be charging no more than its brick and mortar competitors. They then put the extra $20 in their pockets.

This is the story of duty-free shops at airports. Generally the price on tobacco and liquor at these stores is comparable to prices in other stores. The difference is that the money the other stores pay to the government in taxes instead goes into the pockets of the owners of the duty-free stores.

This is the same story with Internet retailers. Amazon has effectively been subsidized by the amount of the sales tax that it would have been required to collect had it been subject to the same rules as its brick and mortar competitors. Instead of putting the extra profits into its pockets, it appears that Amazon has largely followed the strategy of passing on the savings to win market share at the expense of its competitors. This has proven to be an effective strategy, as its sales volume has made it the world’s most valuable retailer by market capitalization.

It is worth knowing how much taxpayers have given through the tax subsidy route to Jeff Bezos, now one of the world richest people. We calculated the amount that Amazon saved on sales tax through its existence. While many states no longer exempt Internet retailers from collecting taxes, 20 states still do. We added up the amount of tax that Amazon would have been required to collect in each state had it been subject to the same rules as it competitors for each year that it was able to avoid this requirement.[1] The total amount through 2014 comes to $20.4 billion. Bezos has gradually reduced his stake in the company over this period, but he still own close to 20 percent. If we apportion the subsidy accordingly, taxpayers have effectively handed $4.1 billion to Jeff Bezos over the last two decades.

In order to put this in perspective, the average monthly TANF payment to a family with one child is roughly $400. This means that taxpayers have given Jeff Bezos the equivalent of 10 million monthly TANF checks. The average food stamp payment is $127 per person per month. Jeff Bezo’s $4.1 billion in tax subsidies would amount to 31.5 million person months of food stamps. 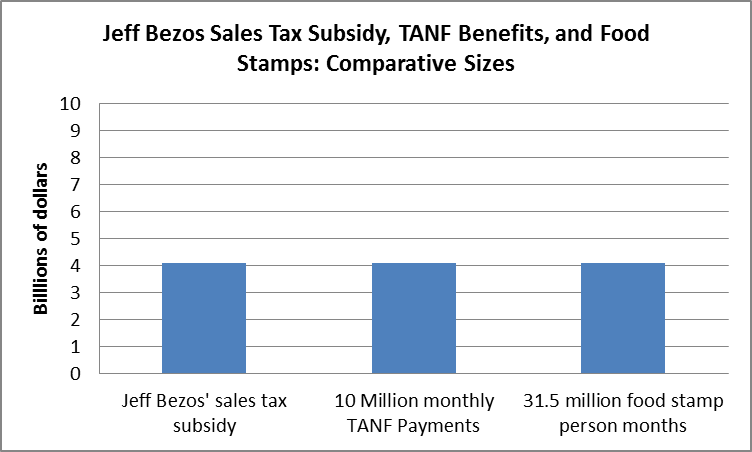 So, as we prepare to celebrate this holiday season, we should keep in mind one person, Jeff Bezos, to whom the rest of us have been very generous.

[1] For simplicity, the calculation assumes that Amazon’s sales in each state were proportional to the state’s share in 2014 GDP. It applies a 5 percent real discount rate to past savings.