This recession has been very different from prior recessions. Most prior recessions were caused by the Fed jacking up interest rates to fight inflation, which sinks the housing and auto sectors. The last two recessions were driven by the collapse of bubbles that were driving the economy (stocks and housing). This recession is due to the pandemic, which has whacked personal services that are especially likely to spread the disease, such as restaurants, hotels, and gyms.

This has meant that a very different group of workers is being hit with unemployment. Historically, manufacturing and construction, two relatively high-paid sectors were the hardest hit. (Manufacturing is no longer a relatively high-paying sector.) The sectors now being hard-hit are relatively low-paying. While there is always some skewing in layoffs in a downturn, with the last hired, and lowest paid, generally being the first to go, the skewing in this recession is far more pronounced. We are not only seeing the lower-paid workers in each sector losing their jobs, but we are also seeing large-scale layoffs in the lowest-paid sectors. 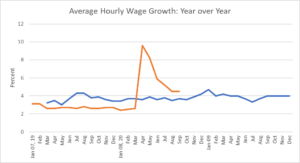 As can be seen, there is a sharp jump in wage growth reported in April. This was due to the mass layoffs associated with the shutdowns. The year-over-year pace slowed to 4.5 percent in August and September, which is still 1.5 percentage points above the pre-recession pace. (Wage growth had actually slowed slightly before the recession, from 3.5 percent to 3.0 percent, in spite of the extraordinarily low unemployment rate.)

Before anyone gets the idea that recessions are good for wage growth, it is worth looking at wage growth in 2010 and 2011. It slowed sharply over the course of 2010, ending the year at 1.4 percent. It bottomed out at just 1.0 percent in April of 2011. The slow wage growth in the weak labor market following the Great Recession is most of the story of the redistribution from wages to profits in the last four decades. The wage share had been recovering in the last five years, but we can expect that story to be reversed if the unemployment rate remains high as we recover from the pandemic recession.