• ARTICLE Globalization and TradeHondurasLatin America and the CaribbeanWorld The Americas Blog

Maquiladora Industry Wages in Central America Are Not Living Wages

While the maquiladora export industry is sometimes touted as a symbol of progress and development in underdeveloped countries, the reality for many workers implies otherwise. In Central America, maquilas act as multinational levers to gain profit, but are not a guarantee of a sufficient income for workers.

The apparel export industry in Central America is concentrated in the hands of a few multinationals. Fruit of the Loom, Hanes, and Gildan Activewear are three of the biggest North American corporations operating in Honduras, employing around 25 percent of maquiladora workers in the country. Fruit of the Loom alone employs approximately 24,000 workers in Honduras and El Salvador. Nike and Adidas also subcontract production to maquiladoras; together they have about 30 outsourcing companies in Honduras alone.

As the following graph shows, the daily minimum wage for workers in maquilas in the Northern Triangle countries represents, on average, 13 percent of the federal minimum wage in the U.S. 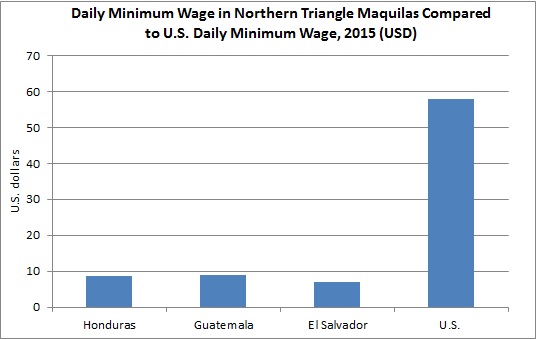 Minimum wage levels in the maquiladora industry of the Northern Triangle countries are especially low considering the cost of a basket of basic consumer goods. A report [PDF] published by the Maquila Solidarity Network demonstrates the low purchasing power of the minimum wages earned by workers in maquiladoras. On average, these wages are equivalent to only 37 percent of the cost of the basic basket of consumer goods (including services). 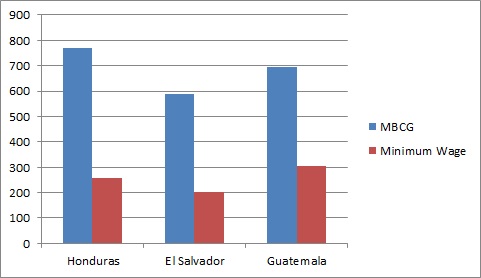 Despite the shocking disparity between the minimum wages and the cost of basic necessities, manufacturers and governments in the Northern Triangle have sought greater flexibility from workers in response to rising competition from China and falling demand in the decelerated U.S. economy.

One of the most important changes that has taken place in the maquiladora industry since the economic crash of 2008 is the fall in minimum wages below those of the non-maquiladora industrial and service sectors. As the following graphs show, the gap between minimum wages in the maquiladora sector and in the non-maquila manufacturing sector, has been widening in the three Central American countries of the Northern Triangle. 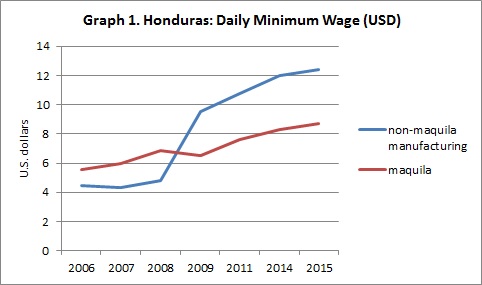 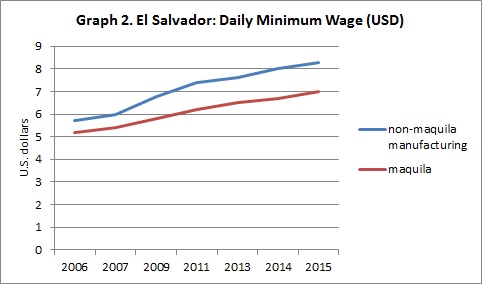 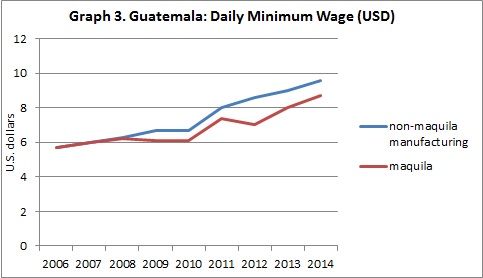 This suggests that cheap labor may be the greatest competitive advantage for Northern Triangle economies. Such an advantage comes at a cost. The lowering of workers’ wages in the maquiladora industry has become a useful tool by which multinationals can respond to a more sluggish U.S. economy.

There have been various demands for higher minimum wages in the maquiladoras in Central America; even the United Nations has expressed concern. However, governments in Central America have insisted on limiting wage growth in response to demands from manufacturers such as Fruit of the Loom, Gildan, Hanes, Adidas, Nike, and others, despite the costs to workers.

Recently, the U.S. and Central American governments have proposed tackling the migration crisis through the “Plan of the Alliance for Prosperity”; however as we have described in previous posts, “the plan makes no reference to greater bargaining power for workers, higher wages or increased benefits, let alone labor unions – all of which would indeed help to reduce inequality and poverty.” Instead, the governments insist on pushing down wages further, while largely addressing the issue of migration as a security problem. Instead of raising pay and ensuring good working conditions, the region is being militarized to contain outward migration. How about calling this the “pressure cooker model”?