This is the last blog post in a three-part series on the Affordable Care Act’s potential effects on part-time employment. The first and second posts can be read here and here.

The first blog post in this series looked at Obamacare’s effect on voluntary part-time employment, arguing that the law may have given workers the freedom to shift from full-time to part-time schedules. The second post said that when some workers cut back on their hours, it likely freed up opportunities for other workers. According to the post, this allowed part-time workers seeking full-time jobs to increase their hours. It may also have given unemployed workers seeking part-time jobs a better shot at being hired.

Instead of advancing a new argument about Obamacare’s effect on part-time work, this post simply examines the changes in different types of part-time employment over the past couple of years. Regardless of whether we believe that Obamacare is behind these positive changes, it’s clear that the forecasts made by the law’s critics simply haven’t come true.

It is worth noting that part-time employment is actually down slightly since before Obamacare went into effect. But more importantly, the experience of working part-time has itself improved dramatically. For instance, the share of part-time workers with health insurance increased nearly 6 percentage-points between 2013 and 2014. And after three years of completely stagnant wages, part-time workers saw significant wage growth beginning in 2014. If Obamacare is supposed to immiserate part-time workers, this misery isn’t showing up in the data; if anything, part-time workers’ wages and benefits both began rising right when the Affordable Care Act (ACA) went into effect.

As was noted in this series’ first post, voluntary part-time employment showed no upward trend before the implementation of the ACA – it only began increasing in 2014. A similar phenomenon holds when examining the decrease in underemployment. The figure below shows a four-quarter moving average of the number of underemployed Americans from the first quarter of 2011 to the third quarter of 2016. During the 2.75 years preceding the ACA (2011 Q1 to 2013 Q4), the number of underemployed Americans fell by 942,000; involuntary part-time employment fell by 836,000, while the number of unemployed workers seeking part-time jobs fell by 105,000. Over the last 2.75 years, underemployment has fallen by the amounts shown in the table above. The decline in both involuntary part-time employment and unemployment among part-time workers has actually accelerated since the ACA went into effect. (Note that the decline would appear even more dramatic if we were to account for growth in the civilian labor force.) 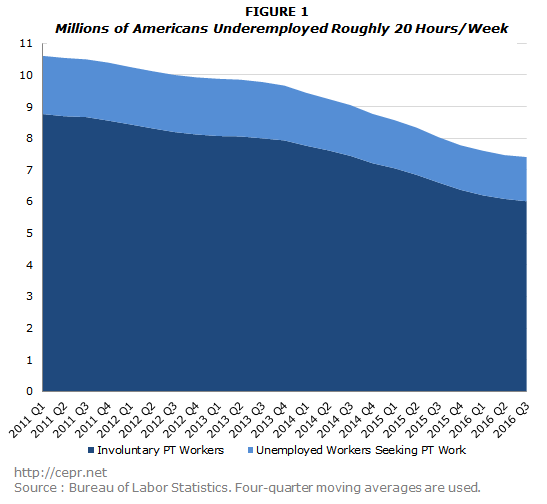 When we look at the changes in part-time employment over the past three years, we don’t see any evidence of the nightmare scenario that many of the ACA’s critics had predicted. Employers aren’t forcing workers into low-paying part-time jobs as a way of trying to keep down insurance costs. Instead, more workers are choosing to increase their leisure time, and part-time workers are finding it easier than ever to buy health insurance. In short, Obamacare isn’t hurting workers – it’s helping them.