Washington DC — In the massive job loss due to the pandemic, proportionately more non-union workers lost jobs than union workers. That effectively boosted union membership rates to 10.8 percent in 2020, according to new analysis released today by the Center for Economic and Policy Research (CEPR).

Union membership has diversified significantly over the last several decades, and this year continued that trend. The unionization share and number of members grew among Blacks and Hispanics, and the gender gap continued to narrow. “Though union membership has historically been largely the province of white men, that’s no longer the case,” said research associate Hayley Brown, who authored the analysis.

The number and share of unionized workers in the public sector increased across all levels of government. “The gains are especially remarkable in light of concerted policy efforts to undermine the collective bargaining capacity of public employees,” said Brown. 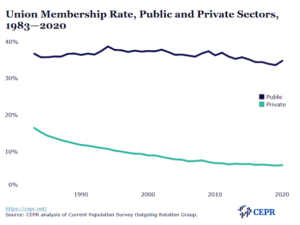 The historically unionized manufacturing sector bucked the upward trend. The rate of union membership in manufacturing in 2020 was 8.5 percent, down by 0.1 percentage points from 2019.